At the end of February, Israeli authorities had 182 Palestinian children, including two girles, illegally detained in prisons, according to a new report released Wednesday. 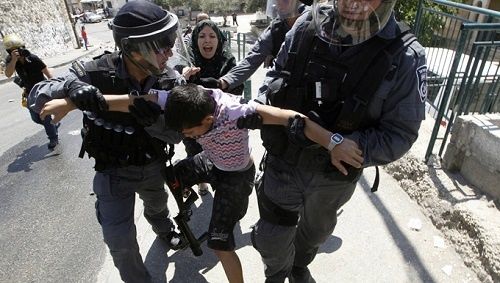 Since 2000, 10,000 Palestine children have been arbitrarily detained and in many cases tortured by Israeli security forces, according to the PLO. (Photo: Reuters)

The children, between 14 and 17 years-old, and including two girls, are detained for half of them in jails located outside the occupied territories, thus disconnected from their relatives.

Numerous human rights organizations have denounced in the past that Palestinian children were abducted by Israeli forces during raids run in the middle of the night.

In total, over 5,600 Palestinian from the occupied territories (Jerusalem, West Bank and Gaza Strip) are reported to be detained. Once arrested, Palestinians can be detained for up to 18 days without being informed of the charges being laid against them; they can also be barred from seeing a lawyer for up to 90 days after the their arrest.

In March, a report from the Palestinian Prisoners Society found that Israel tortured about 95 percent of the Palestinian prisoners it holds in prisons, including minors, women and even ill detainees, violating the Fourth Geneva Convention of which Israel is a signatory nation.

Daily suffering for the children of #Palestine pic.twitter.com/mwr06D2DgC

The difference between children of Palestine and the rest of the children in the world . pic.twitter.com/7Pz52kNHaC

On Wednesday, Palestine formally joined the International Criminal Court, opening up the door to possible prosecution of Israeli war crimes against the Palestinian people since 1967.

Last November, the Palestinian Liberation Organization (PLO) denounced that Israel had detained about 10,000 Palestine children since 2000 and that they had been subjected to humiliation, torture and solitary confinement.

Issa Qaraqe, head of the PLO's committee on detainees, also stated that the children's rights were being violated "regularly."