Haiti 6 Years After Its Devastating Earthquake

Indigenous National Strike in Ecuador: Has the Government...

While Haiti has seen progress since the 2010 earthquake, the negative impacts continue, exacerbated by decades of external interventions that impoverished the island nation. 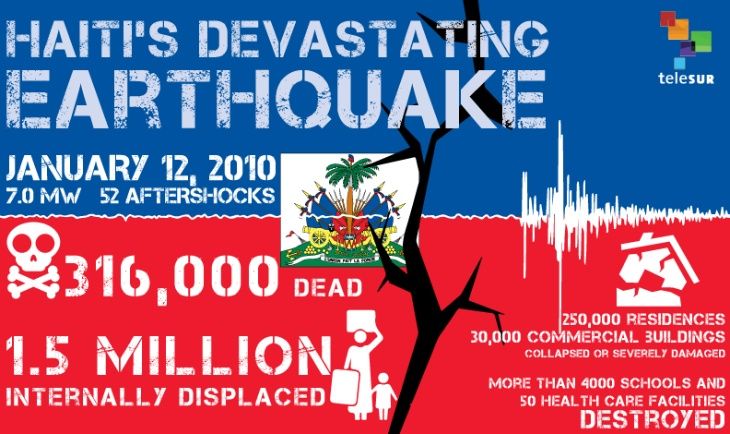 While Haiti has seen progress since the 2010 earthquake, the negative impacts continue, exacerbated by decades of external interventions that impoverished the island nation.

The Caribbean country, along with international agencies, is still trying to tackle the housing crisis the devastion left behind. However, official figures show the amount of people still living in camps, formally known as internally displaced people, has decreased considerably.

Haiti’s continues to be marred by foreign, imperial interventions. This has complicated the country’s struggles for lasting democratic governance.

European powers quickly responded to this bold act by placing a naval blockade on the country, and by demanding reparations for the audacious act of slaves declaring themselves as free women and men. The amount of money that Haitians had to pay to avoid being leveled by a multicountry fleet at its shores left its economy crippled for decades to follow. In 2003, then President of Haiti Jean-Bertrand Aristide called on France to pay Haiti over US$21 billion in compensation for the millions in gold francs Haiti was forced to pay after winning its freedom from the European nation.

Since the Haitian revolution, institutionalized poverty, environmental degradation, violence, political crisis, the U.S. occupation (1915-34), dictatorship under the Duvaliers, and repeated U.S. interventions, have left the country as the poorest nation in the Americas.

Earthquakes Highlights Crisis in the State

The crisis that followed the earthquake reflected this legacy of poverty and was almost impossible to control. Former President Rene Preval announced the government's incapacity to overcome the earthquake’s carnage, given the literal collapse of the country's infrastructure, including the presidential palace.

After Preval’s announcement the United States launched the so-called “Operation Unified Response,” a military response aimed to “help” the collapsed Caribbean nation, which does not have its own army.

The operation included a huge contingent from all branches of the U.S. military, including 17 ships, 48 helicopters and 12 fixed-wing aircraft, in addition to 10,000 Sailors and Marines who arrived between Jan. 19-26. By Feb. 18, the U.S. military had 17,000 personnel in and around the island, while the air force had delivered nearly 6,000 support members and 19 million pounds of cargo while evacuating 15,000 American citizens.

In an interview with teleSUR, Oscar Oliva, member of the world-renowned Mexican rescue brigade “Topos Tlatelolco,” said the U.S. Marines literally besieged the capital Port au Prince, thus preventing the actions of international rescue brigades whose sole purpose was to rescue people trapped under the rubble.

Six Years On: Improvements, but Much More to Do

During the five years since the earthquake, Haiti has changed a lot. I walked the streets of Port-Au-Prince and the metropolitan area of the capital and witnessed how Haitians have worked to improve their situation despite all the adversities they face day by day. It’s amazing to see how the reconstruction process has taken a slow, but constant pace. However, there's still much to do.

It was a Saturday afternoon when I went to visit Ena Zizi in the old town of the capital. She is a 75-year-old lady who was rescued near by the Metropolitan Cathedral, which is still on ruins, while rescuers were searching for the city's bishop after people in the zone had reported hearing his cries for help under the rubble of the church.

“I was desperate, praying and asking God for my family, because I didn't know if they were alive, suddenly I heard a dog barking and people digging, I was asking them for help and then I just heard a voice saying, hold on we're coming to get you out, and then I saw a light and they took me out” said Zizi.

Ena's hip was fractured and her health was in serious condition as a result of being trapped under the rubble for eight days. It's impossible for her not to cry every time she remembers the moment when Mexican rescuers pulled her out. The international media recorded the moment, according to Mexican brigadier Oliva, and thanks to this rescue they didn't have to face charges for breaking the siege imposed by U.S. marines in the disaster's aftermath.

Six years ago it was impossible to locate a single building or not to get lost in that disaster. Today, the old town has many buildings that are on the verge of collapse, but the life has returned to the streets of Port-Au-Prince with street markets filled with the scents and colors which five years ago were dominated by the fetid smell of decomposing corpses.

I went to a school in Carrefour, a largely residential community in the Port-au-Prince metropolitan area run by the Catholic Salesian mission. Land owned by the school served as a camp five years ago where almost 10,000 of internally displaced people took refugee for almost 2 years. I spoke with the service staff there and asked them to help me find survivors. Before I could say anything else, a nurse told me, “We are all survivors Sir.”

It was true. All of the people there who suffered the 2005 Haiti earthquake are survivors. All of them.

Their stories may be different, but all the people lost at least one relative or a friend. This was a natural phenomena, something that man cannot prevent. However, the massive damage it caused was an effect of the poverty and neglect in which millions of Haitians live.

The displacement camps where thousands are still living are run by the United Nations, along with the International Organization for Migrations (IOM). They are spread out across the country. While touring one displacement camp,  I learned that the land in which the camps are settled is owned by private individuals who receive rent payments by the government.

The IOM staff and the government are working together in order to solve the housing situation. According to official figures, 289 camps were closed over the past five years. In the same period there has been a 94 percent fall in the total numbers of internally displaced people household population.

But in an interview with teleSUR, Ilaria Lanzoni,  the IOM’s media and communications officer said that exactly five years after the devastating earthquake of Jan. 12, 2010, an estimated 79,397 internally displaced individuals remain in 105 displacement sites and camp-like settlements in Haiti.

Lanzoni said in addition to the housing component, IOM carries out extensive community infrastructure rehabilitation, including drainage, footpaths, stairs, roads, public spaces and street solar lighting, in order to improve public health and safety. Following validation by national authorities, residents whose houses were destroyed by the earthquake each received a two-story house built on their land by the IOM at no cost.

They also work with the communities to prevent high-risk migration, such as traveling in makeshift vessels and human trafficking, which always proliferates when poverty and suffering increase.

Haitians continued to be threatened by other natural disasters and also cholera outbreaks. The country remains vulnerable and the authorities have a long way to go to achieve full reconstruction and prevent another crisis like that of 2010.