On Earth Day teleSUR takes a look at the community conservation practices of peasant and Afro-descendant communities of Colombia in this photo essay by CENSAT Agua Viva, Fundaexpresion, and Global Forest Coalition.

*These photos were created as part of the Community Conservation Resilience Initiative, a global initiative of Indigenous Peoples Organizations, social movements, and NGOs who are highlighting the importance of communities’ own conservation efforts. 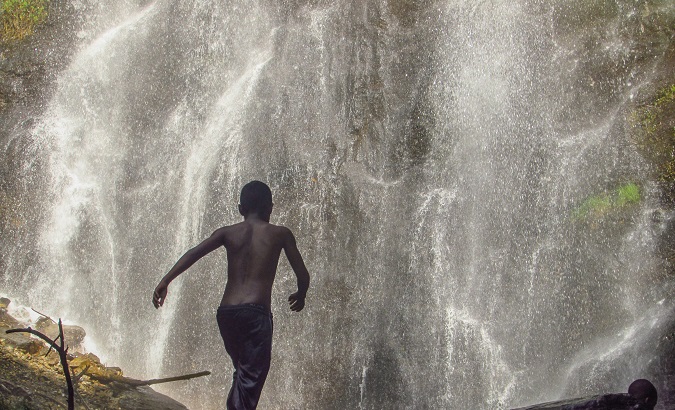 The communities’ conservation practices include recreational and sharing activities. Meetings or assemblies do not have to be limited to a political or organisational dimension, they aim to promote well-being and leave time for ‘Been y Bien Vivir’ (good living and well living). The communities pictured here are reclaiming the peasant way of life as a reason for pride and a dignified life. Their conservation initiatives are critical to protecting biodiversity. It is important that the state ensures these communities a right over their territories and freedom from violence and threats so they can continue to live in and conserve their territories. Photo:Jeanne Lieberman and CENSAT Agua Viva 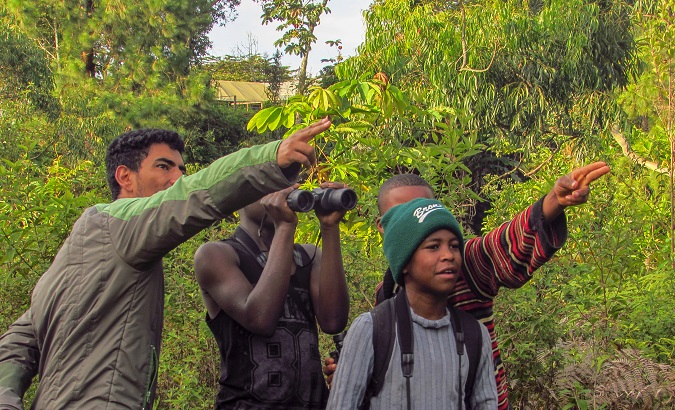 Colombia has the second largest Afro-descendant population in Latin America. Pictured here are Afro-Colombian children from the communities of La Alsacia. They are monitoring birds. La Alsacia is located in the southwest of the country, in the western cordillera in the department of Cauca. The Afro-Colombian communities of La Alsacia depend on the biodiversity for their subsistence and for protecting their identity. They see themselves as the natural custodians of the biodiversity in their territories. Photo:Jeanne Lieberman and CENSAT Agua Viva 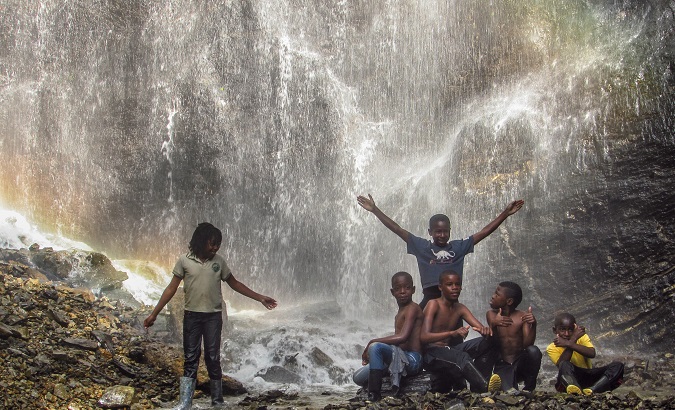 Children from La Alsacia playing in a waterfall. In 1993, Colombia passed the historic law 70, which granted collective land titles to Afro-descendant communities and their right to the management of the resources found within them. Photo:Jeanne Lieberman and CENSAT Agua Viva 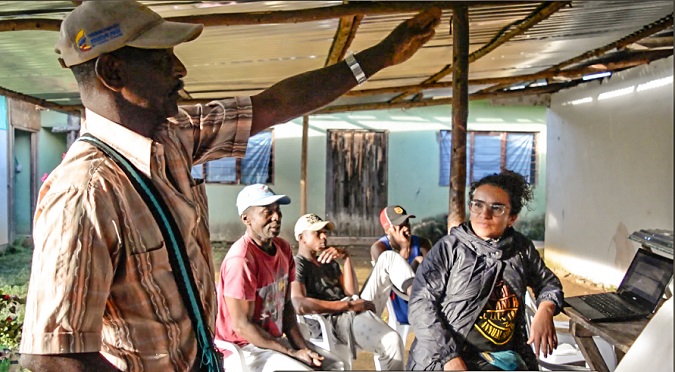 Under this law, the community of La Alsacia created their own autonomous Community Council—a self-governed administration. They inhabit and protect a mountainous area of approximately 1,088 ha, of which 600 ha are destined for conservation. Despite this law, they have suffered multiple forced displacements and threats from armed actors, drug traffickers, mining and petroleum companies who want access to the natural wealth of their territory. Also, there are still armed confrontations near the village, and several communities have been subject to new threats. This is a common experience in Colombia, and disputes over land, mainly in Afro-descendant territories, are intensified by the rapid expansion of oil palm monocultures. Photo:Jeanne Lieberman and CENSAT Agua Viva 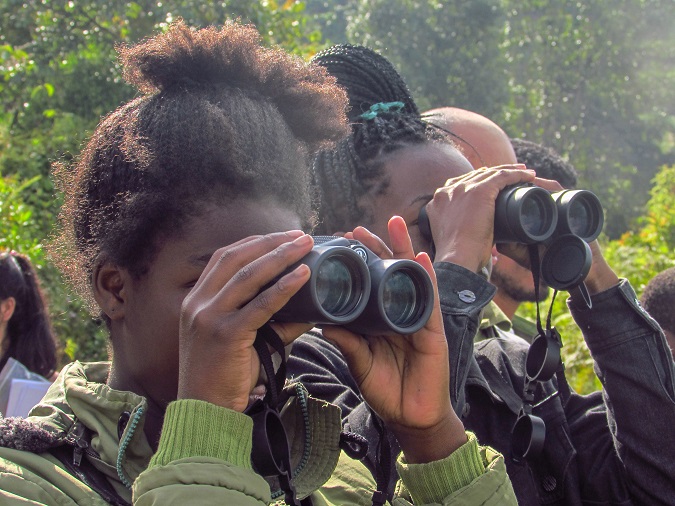 Women from La Alsacia monitoring animals and birds. The community has a deep knowledge of their natural heritage. They have their own names and classification systems for fauna and flora, and internal regulations that monitor harmful activities. For example, they prohibit the planting of illicit crops due to their environmental, social and cultural impacts. Photo:Jeanne Lieberman and CENSAT Agua Viva

On the other side of Colombia, in the eastern mountain range of Santander, live the peasant communities of the Los Maklenkes and Barbas de Mono reserves. They belong to the ‘Colectivo de Reservas Campesinas y Comunitarias de Santander’ (Peasant community reserves of Santander). These reserves are owned and run by campesinos, and unlike the Afro-descendant community in La Alsacia, they have no special rights. They also protect the biodiversity in their territory. Many peasant communities created such community conservation initiatives as a result of threats from excessive logging, monoculture farming, mining, livestock ranching and the lack of protection from the State. Up until a few years ago they were severely affected by the armed conflict in Colombia. Photo:Fundaexpresíon and CENSAT Agua Viva 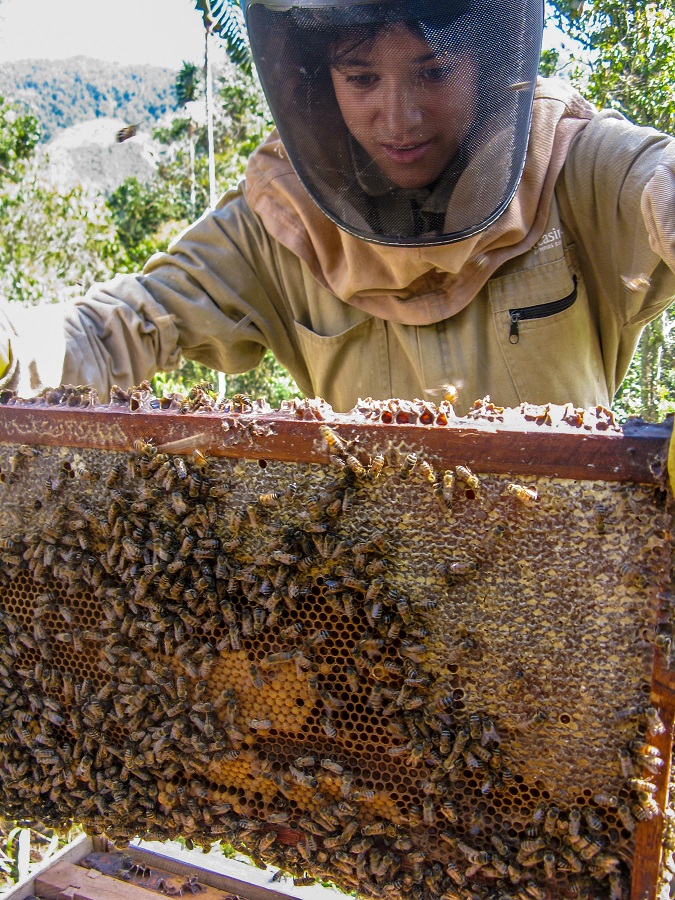 A beekeper analysing a hive. Encouraging productive strategies associated with community management and conservation spaces is critical to the communities’ resilience. The peasant communities carry out various collective initiatives like seed saving, biodiversity monitoring, protecting collective aqueducts, and beekeeping. In Barbas de Mono the community decided that keeping bees would be a productive activity that is good for biodiversity and would bring the community together—there are now hives managed by families and others that are managed by the community as a whole. In the Los Maklenkes reserve, productive activities compatible with the care of the natural heritage within the reserve include the use of non-timber forest products and the propagation of orchids. Photo:Fundaexpresíon and Censat Agua Viva 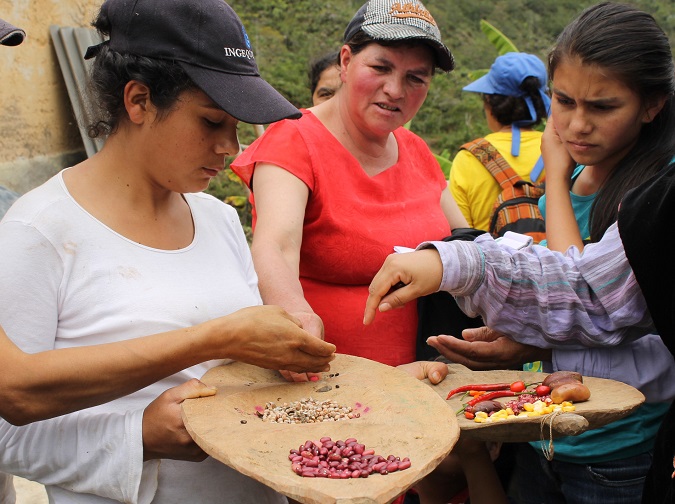 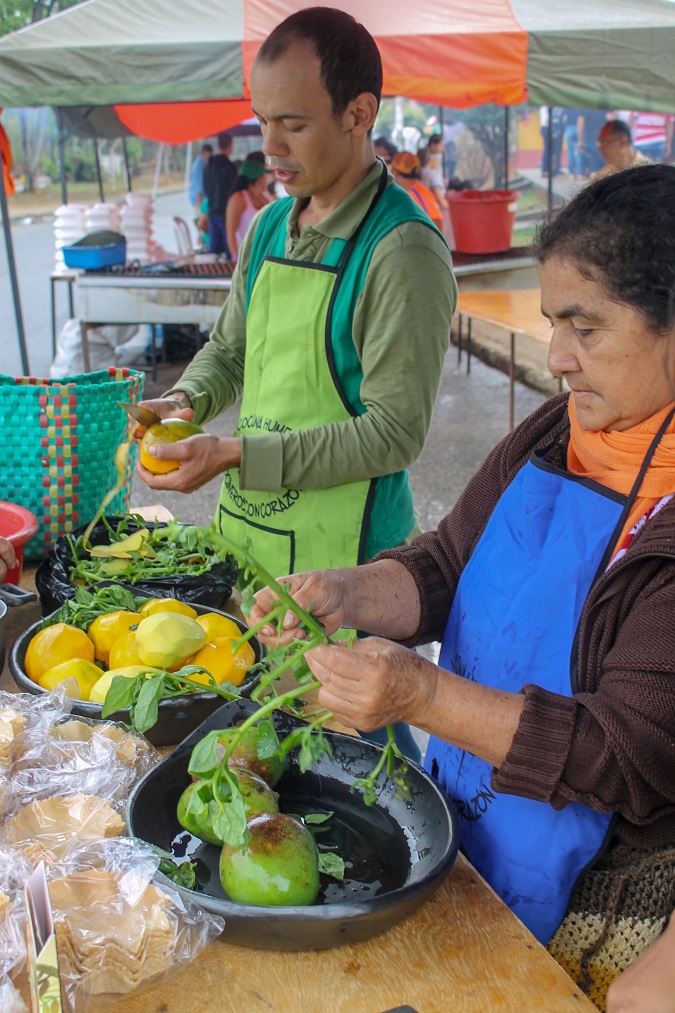 Community members from Los Maklenkes preparing a meal. The communities produce their food in an agroecological manner, without using chemicals, and practice agro-forestry to produce honey, shade coffee, and various fruits and flowers that the families sell directly in the neighbouring cities. The community observed that one of the reasons for their resilience is the crisis and conflict that they have had to endure. Rather than abandon their territory, they chose the highly risky strategy of negotiating with armed actors to remain on their lands. Photo:Fundaexpresíon and CENSAT Agua Viva 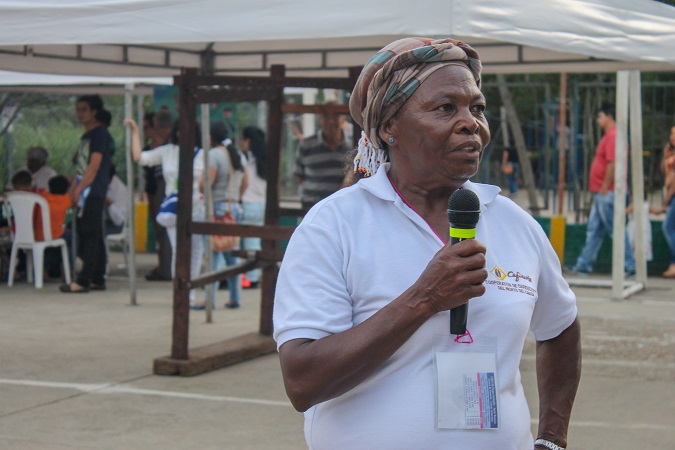 A woman from La Alsacia speaks about the history of their Community Council at the Festival of Rural and Urban Expressions in Bucaramanga in 2017. La Alsacia is located in an area that was strongly affected by the armed conflict. Today, a ‘zona de transición’ is located very close to their territory. This is a space for ex-combatants from guerilla groups like FARC to give up their arms. Although the community of La Alsacia is happy about the peace process they are concerned about repercussions in case the government does not live up to their promises in the peace accords. Any violence will greatly affect their ability to collectively govern their territory. Photo:Jeanne Lieberman and CENSAT Agua Viva 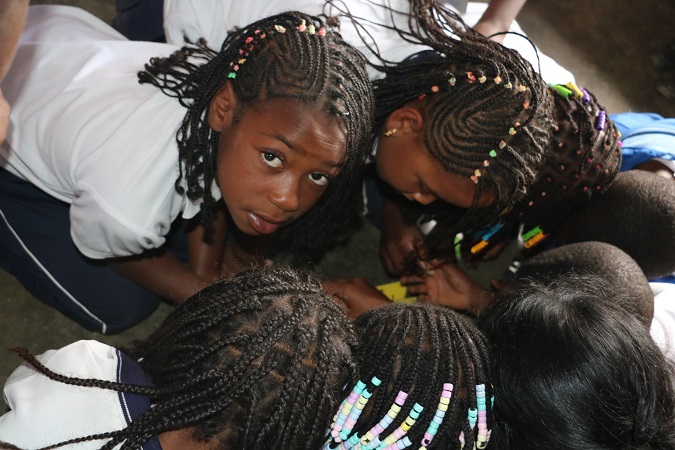 Children at school. Decades of armed conflict have seriously impacted communities’ capacity to conserve their territories. The most common reaction has been the displacement and abandonment of territories, and Colombia has more internally displaced persons that any other country (7.4 million in 2016). Parents have restricted the places that children and young people can travel to, and there are problems with anti-personnel mines in some places. All this has contributed to a loss of knowledge about territories. This is a fundamental problem, as it is difficult to appreciate and defend something not well known. Knowledge about territories needs to be revived. Popular education is seen as an important strategy to help communities recover part of their culture and assets, and identify what has been or is being imposed on them. Photo:Jeanne Lieberman and CENSAT Agua Viva 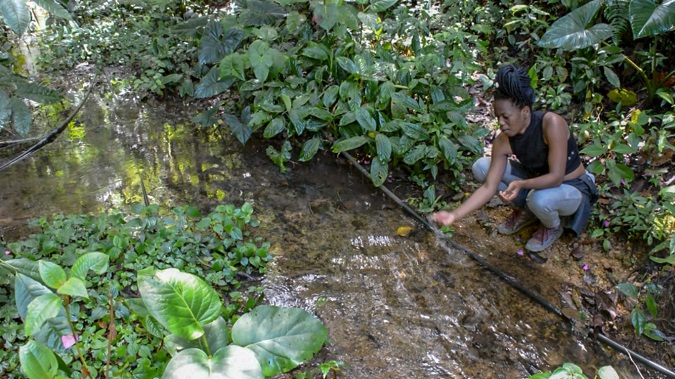 Paola Andrea Choco from the Community Council of La Alsacia inspects a pipe. Under the ongoing peace process in Colombia, the government approved the ‘green economy’ model of conservation through laws like the National Program for Payment for Environmental Services PES for Peacebuilding. This creates a system for conservation based on payments and monetary incentives. The community wonders about the impacts of this model upon their own community conservation initiatives, which are not based on monetary values but connected to their own identity and vision of development. The model could undermine traditional conservation values, especially by promoting the further commercialization of nature. Photo:Jeanne Lieberman and CENSAT Agua Viva 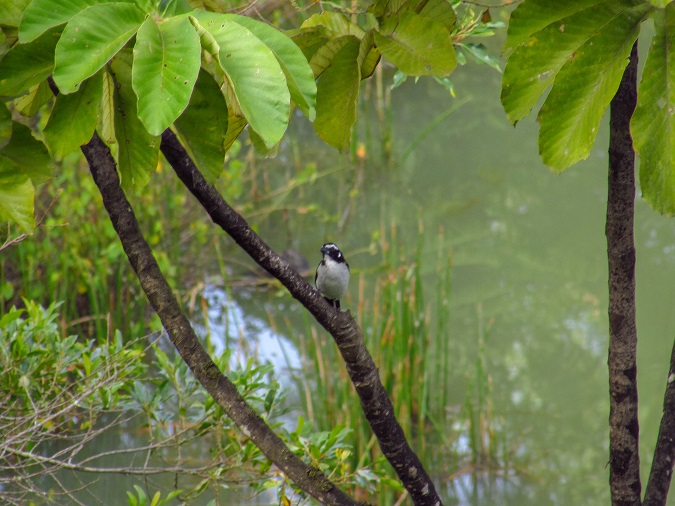 The La Alsacia community is happy that the conflict has receded but are now concerned about what may happen to Mother Nature within the context of the peace agreement with the FARC, as the armed conflict did previously prevent the area’s exploitation by third parties. Photo:Jeanne Lieberman and CENSAT Agua Viva 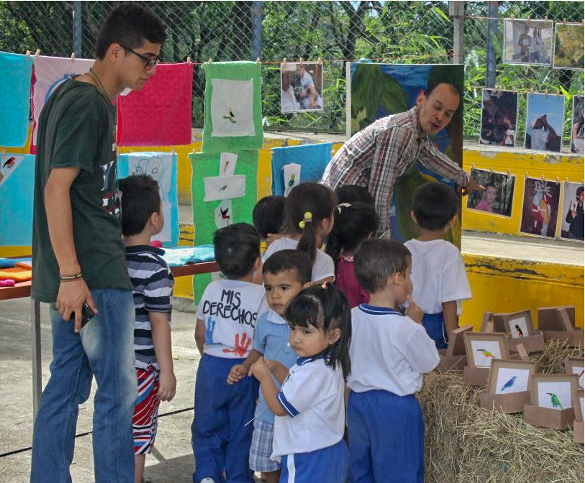 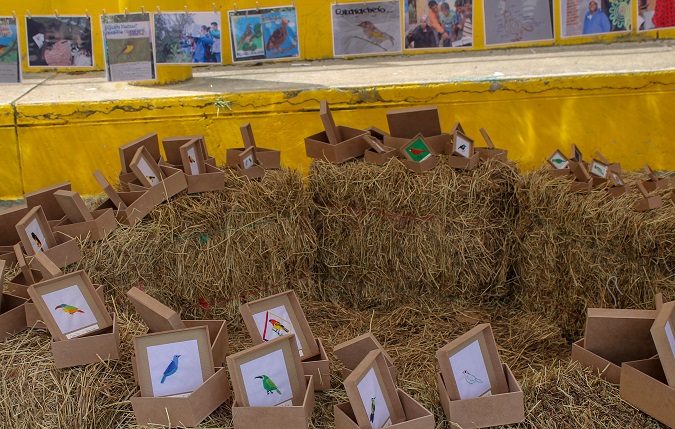 A display of embroidered birds from Barbas de Mono Reserve. As part of a community project to monitor local bird species in their territory, community members decided to embroider them. Men also joined women in this work which is traditionally considered to be women’s work.