Because Cuba never surrendered, it stands strong and proud as an example and inspiration for the rest of the world.

The historic new relations between Cuba and the U.S. could prove to ease the full-court press the U.S. has maintained against the small island nation. Cuba has suffered under a blockade, invasion, sabotage, terror and destabilization campaigns led by the U.S.

In light of this, Cuba insists that before there is a normalization of relations between the two countries, the U.S. must end its 55-year-old blockade; return the illegally-held Guatanamo Bay; change its immigration policies toward Cuban migrants; stop transmitting radio propaganda into the country and attempting to build an opposition; and finally stop all attempts at regime change.

If You Read Just One Thing...

5 Reasons Why Obama Radically Changed US Policy Toward Cuba

Geopolitical interests, beyond economic ones, have pushed Washington to change its policy with Cuba, experts explained to teleSUR. READ MORE

Raul Castro Insists Obama Should Use Powers to Lift Blockade

Cuban President Raul Castro again called on his U.S. counterpart Barack Obama to use his executive powers to lift the 53-year blockade against the Caribbean island and warned that his country would not bow to pressure or conditions that put Cuba’s sovereignty at risk. READ MORE

Gitmo is an offshore penal colony that’s close enough to administer with ease, but far enough away to exist on the margins of legality. READ MORE 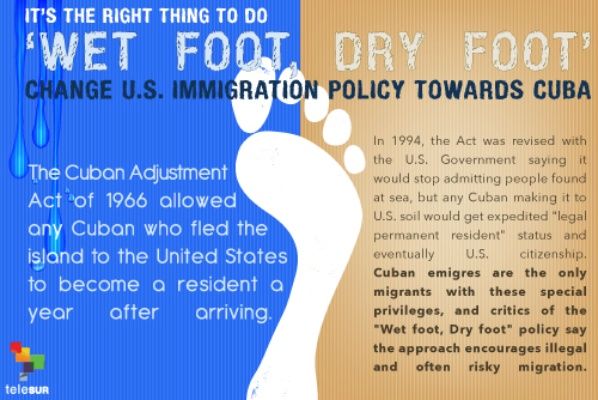 The Cuban Adjustment Act, passed in 1966 by the U.S. Congress, allows any Cuban who enters the United States to gain permanent residency after being present in the U.S. for one year. This law, passed at the height of the Cold War, is unique to Cuban emigrants, with no other migrant group given this special consideration. READ MORE

As usual, the U.S. is singling out Cuba for human rights abuses ahead of Barack Obama's historic visit to the island – but what of Washington's abuses? READ MORE

Opposition organizations from Cuba are anxiously expecting President Barack Obama's visit to the island as they prepare allegations against the Cuban government and demands to the U.S. government in an effort to take advantage of the recent international attention on what has been deemed a historic visit. READ MORE

Leading up to U.S. President Obama's visit to Cuba the private media in the United States made a lot of noise about Cuba's human rights record. But is it accurate? READ MORE

The Cuban people have withstood over 50 years of U.S. aggression. Their steadfast and sage leadership has helped propel the success of the revolution. Nonetheless, solidarity is essential. READ MORE

While, Latinos in the United States hold polarizing views, many see Cuba's diplomatic victory as an inspiration. READ MORE.

In Pictures: Cuba's Gains through the Years

Related Stories
You are the Reporter

Putin and Erdogan Meet in an Attempt to End Idlib Crisis