The United States and the world mark Wednesday the 50th anniversary of the assassination of legendary Black leader, Dr. Martin Luther King Jr, a charismatic orator who played an instrumental role in the U.S. civil rights movement. 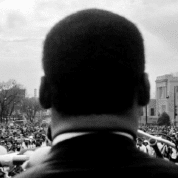 But in the years following his assassination in 1968, conservatives have tried to tarnish King's image by co-opting his philosophy and by convoluting his messages and using them to promote their narrow agenda through the prism of theology.

King was a theologian and promoted non-violence but not in the way commonly portrayed by conservatives. On the contrary, his radical, anti-imperialist, anti-capitalist stance on a litany of issues, such as being against war, pro-choice, for LGBT rights, access to health care, immigration reform, speaks of his revolutionary acumen.

"His fundamental commitment is to a radical love of humanity, and especially of poor and working people. And that radical love leads him to a radical analysis of power, domination, and oppression," Cornell West, a prominent U.S. philosopher, and scholar said in a 2015 interview with the Chicago Tribune.

West said King's legacy "gets sanitized and sterilized every January..." "Underscoring his identification with the poor, his unapologetic opposition to the Vietnam War, and his crusade against global imperialism."

One of the widely known examples is when the then U.S. president, Ronald Reagan, used an excerpt from King's signature, "I have a Dream Speech" posthumously to say something King would never approve of.

In June 1985, Reagan who was against the Civil Rights Act of 1964 cited King's "content of our character" line from the speech in his argument against affirmative action, stating that King's vision of a colorblind society would not want racial hiring quotas.

"The truth is, quotas deny jobs to many who would have gotten them otherwise but who weren't born a specified race or sex. That's discrimination pure and simple and is exactly what the civil rights laws were designed to stop," the former U.S. president said in a radio address on civil rights.

"Although much of America did not know the radical King—and too few know today—the FBI and U.S. government did," West who edited "The Radical King," a collection of excerpts from King's speeches and other writings to shed light on King's ideas and philosophies, wrote.

King, non-violent, was a powerful orator, who could move the masses that terrified the U.S. government agencies.

The U.S. agency, Federal Bureau of Investigation, FBI started wiretapping King after he delivered his iconic, "I have a dream" speech. The agency later labeled him, "The most dangerous Negro of the future in this nation from the standpoint of Communism, the Negro and national security."

In the essay, Garris argues, "the legacy of the Rev. Martin Luther King, Jr. King was no stalwart Conservative, yet his core beliefs, such as the power and necessity of faith-based association and self-government based on absolute truth and moral law, are profoundly conservative."

"King's primary aim was not to change laws, but to change people, to make neighbors of enemies and a nation out of divided races," she wrote.

The conservatives with Garris-like ideology have made efforts to link their agendas, such as pro-life, anti-gay rights to King to insult him and attract King's ardent followers with lies and deceit.

Planned Parenthood, an organization known to promote choice and safe women healthcare honored King with its highest award in 1966.

"Speaking before the Second National Convention of the Medical Committee for Human Rights in Chicago, Illinois, on March 25, 1966, Dr. King said, Of all the forms of inequality, injustice in health care is the most shocking and inhumane," Planned Parenthood's statement read.

"They want to claim they understand Dr. King better than Dr. King did," Taylor Branch, the Pulitzer Prize-winning author of a trilogy on King, told the CNN.

Branch added that the Conservatives have been muddling with King's statements even when he was alive.

"Most people who were uncomfortable with his message did not take it head-on and say Dr. King was wrong because his message was so powerful, and near the heart of patriotism. They would say, 'I agree with you except you shouldn't break the law,' or 'you shouldn't mix church and state' or 'stop corrupting the lives of youth,' " Branch said.

In a 2015 interview with Chicago Tribune, pointing to historical amnesia, West shone a light on King's forgotten core values.

"It's clear that he was incredibly courageous in his critique of white supremacy, wealth inequality, and imperial power as it relates to the war in particular. But it's easy to deodorize Martin King, to sanitize or sterilize him," the renowned scholar told Tribune's, Kevin Nance. "The radical King was a democratic socialist who sided with poor and working people in the class struggle taking place in capitalist societies."

"The response of the radical King to our catastrophic moment can be put in one word: revolution—a revolution in our priorities, a reevaluation of our values, a reinvigoration of our public life, and a fundamental transformation of our way of thinking and living that promotes a transfer of power from oligarchs and plutocrats to everyday people and ordinary citizens. . . " West said, asking, "Could it be that we know so little of the radical King because such courage defies our market-driven world?"

In 1957, King founded the Southern Christian Leadership Conference, SCLC, roots of which can be traced back to the Montgomery Bus Boycott which began in December, 1955, led to the arrest of Rosa Parks who defied the segregation on the bus by refusing to give up her seat to a white man on the bus.

King faced harsh criticism for his non-violent approach from the more radical leaders in the civil rights movement. He was even viewed as a sellout by the Black militants, but the ever-evolving King knew where his strength lay.

"The government has got to give me some victories if I’m going to keep people nonviolent,"  he said at the time.

His evolution can be traced back to 1965 during the Selma voting rights march in Alabama. There was a visible shift in King's viewpoint after he heard the news of James Meredith, the first Black student to attend segregated the University of Mississippi of being gunned down for his solo protest across the state.

King along with Stokely Carmichael, the Student Nonviolent Coordinating Committee, SNCC leader, joined hundreds of activists to complete Meredith's march in the summer of 1966.

In his own words, King admitted to his "limitation."

"We must admit there was a limitation of our achievement in the South,” he said at a meeting of the SCLC board in 1967. Adding, SCLC will have to call for a “radical redistribution of wealth and power.”

"While King refused to join more conservative black civil rights leaders in attacking the Black Power slogan as racist, he refused to support it on the grounds that it implied violence and would alienate potential white support," Lee Sustar, editor of Socialist Worker, in his essay, "The Evolution of Dr. King"  for Jacobin in 2017 pointed out.

"Before his assassination in 1968, King broke with Democratic President Lyndon Johnson over the Vietnam War and the administration’s failure to enforce civil rights legislation in the South."

Martin Luther King Jr was dangerous not to the country or its people, but to the maintenance of the status quo, which conservatives hold at their very core.

King was assassinated two days before he was supposed to deliver a sermon, "Why America May Go to Hell." He was also planning a ‘Poor People’s March’ to occupy DC with a call to attain economic justice and help the poor get jobs, decent housing, and affordable healthcare. An anti-poverty legislation was also in works at the time King was killed.

The iconic civil rights leader radical transformation was evident in his "Letter From Birmingham Jail," in which he addressed eight white Alabama clergymen who criticized King, calling him an "extremist" and expressed concern that the civil rights campaign could lead to violent clashes.

"We are tired of smothering in an air-tight cage of poverty in the midst of an affluent society. We are tired of walking up the streets in search for jobs that do not exist. We are tired of working our hands off and laboring every day and not even making a wage adequate with daily basic necessities of life. We are tired of our men being emasculated so that our wives and our daughters have to go out and work in the white ladies’ kitchens, cleaning up, unable to be with our children, to give them the time and the attention that they need. We are tired," King wrote.

"'Wait, wait for a more convenient season.' But I want you to go back and tell those who are telling us to wait that there comes a time when people get tired."

The letter serves as an important reminder of King's radical power.

"We will see all the facets of King that we know, but now we have the badass King and the sarcastic King, and we have the King who is not afraid to tell white people, 'This is how angry I am at you,' " Jonathan Rieder, a sociology professor at Barnard College, author of a new book on the letter called Gospel of Freedom, told the NPR.