Who is Leopoldo Lopez?

The Strength of the Sandinista Model

﻿Leopoldo Lopez, once mayor of the wealthy Caracas district of Chacao, made international headlines last year with the private media portraying him as one of the chief figures of the more radical section of Venezuela’s opposition.

Because his efforts in calling for, planning and then promoting violent blockades in the country – violence which claimed the lives of 43 people, injuring hundreds, and causing billions in damage to public buildings and infrastructure – Lopez was arrested and sentenced by Attorney General Luisa Ortega's office.

Since then, he has become the cause célèbre of Latin America’s flailing right-wing political establishment. Recently, a number of retired presidents came out of the woodwork to demand Lopez be freed, including those who have dubious legacies in their countries, such as Mexico’s Felipe Calderon, who launched the drug war which led to over 100,000 deaths and Chile’s billionaire Pinochet supporter Sebastian Piñera.

His wife, Lilian Tintori, has herself become a rising star of the opposition, traveling the world to meet with prominent political allies including U.S. President Donald Trump and OAS head Luis Almagro calling not only for her husband's release but also for the ouster of Nicolas Maduro.

Lopez was given house arrest by the country's Supreme Court, citing health complications.

Beyond the photo-ops and vacuous rhetoric about “human rights,” Lopez has a long and sordid history in Venezuelan politics that contradicts those who project him as a democrat, let alone a political prisoner.

From U.S. Schools to U.S. Ties

Leopoldo Lopez comes from a long line of the political class in Venezuela. Among his various family members who held high offices, his grandfather was a former secretary of agriculture for two years during the 1940s and he is also the great-great-great-grandson of the country's first president, Cristobal Mendoza.

Lopez studied in private and Ivy League schools in the United States, having graduated from the private secondary boarding school, the Hun School of Princeton in New Jersey, as well as Harvard University's Kennedy School of Government.

In his own words, and to his credit, many years before the Occupy movement popularized the term - Lopez acknowledged his own class background. “I belong to one percent of the privileged people, and achieving a good education will hopefully enable me to do something to help my country,” Lopez told a student paper while studying in Princeton.

While studying in the U.S., Lopez co-founded Primero Justicia (Justice First) in 1992, which became a party in 2000 and has been a bastion of the right-wing opposition, producing leaders such as Julio Borges and Henrique Capriles Radonski.

After finishing his studies in the U.S., Lopez returned to Venezuela, taking up a lucrative analyst position at state-owned Petroleos de Venezuela, PDVSA, between 1996-1999. During this time, the semi-privatized company was a boon for those like Lopez who had connections with Venezuela’s political establishment. An investigation concluded that Lopez “stole money and trafficked influences,” syphoning resources to his political movement. Lopez’s actions led to his suspension from office.

But before his suspension, Lopez was elected mayor of Chacao, the wealthiest of Caracas’ five municipalities. In a city sprawling with dense, improvised housing, Chacao is a testament to the spatial, class divide, registering a poverty rate of only 4.67 percent, according to the 2011 census.

By this time, the late Hugo Chavez had been elected president and small but meaningful reforms began to be implemented. From the very start of the Bolivarian process, Lopez positioned himself against the Chavez government and the redistributive reforms it had launched.

RELATED:
OAS Chief Almagro Calls For Yet Another Meeting on Venezuela

According to investigative journalist Eva Golinger, in 2002 Lopez began making frequent trips to Washington, D.C., to “to visit IRI (International Republican Institute) headquarters and meet with officials in the Bush administration.” The IRI, one of the three foundations of the ill-named National Endowment for Democracy (NED), has been pumping tens of millions of dollars to opposition groups in Venezuela, including Justice First.

A Would-Be Leader of the Opposition

In April 2002, Lopez was among those who led an opposition march which was re-routed toward the Miraflores Palace in Caracas, where thousands of Chavez supporters were also demonstrating. Dozens of people were killed in the ensuing clashes, which have been shown to be a premeditated, orchestrated massacre to justify the coup and kidnapping of then President Chavez. 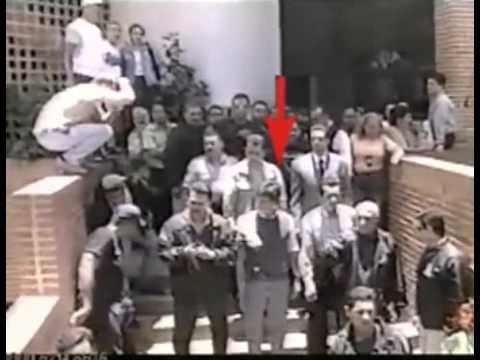 Lopez (signaled) among those who illegally detained the Minister of Justice during the coup. (Source: Youtube)

In the days that followed, Lopez participated in a witch hunt for officials from the Chavez government, including the illegal detention of Minister of Interior and Justice Ramon Rodriguez Chacin. It is astonishing to remember that Lopez did this while still occupying the office of Mayor. Furthermore, Lopez was instrumental along with fellow coup conspirators such as Capriles in planning and executing violent attacks against the Cuban Embassy. 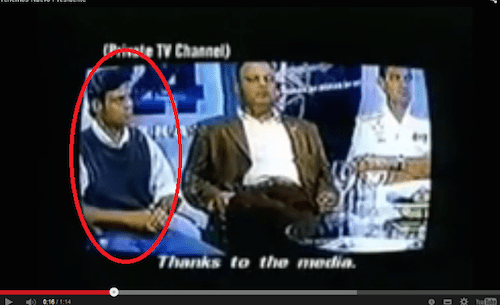 Lopez (circled) on TV the day after the coup, where media are acknowledging their role in orchestrating the tragic events. (Source: Youtube)

If not for the December 2007 amnesty granted by President Chavez himself, Lopez might have long been sentenced to serve jail time.

Roberto Lovato, writing in Foreign Policy magazine, noted that, "In 2005, a comptroller general investigation found that López’s mother (Antoinette Mendoza) had in 1998 channeled US$120,000 in corporate donations from PDVSA to Primero Justicia while she and López were at the firm, in violation of anti-corruption laws.” Primero Justicia is a right-wing opposition political party which Lopez belonged to until 2007. As a result of the investigation, Lopez was barred from holding office between 2005-2008.

Another investigation determined that Lopez was guilty of mishandling funds during his term as mayor of Chacao. The two matters disqualified Lopez from holding political office, but only until 2014 - once again, a light punishment by most comparisons.

By this point, even his Washington allies were starting to express reservations, according to cables released by Wikileaks. U.S. embassy staff in Caracas characterized Lopez as “arrogant, vengeful, and thirsty for power,” which made him “a divisive figure of the opposition.”

Shortly after the suspension, Lopez broke rank with the opposition, founding yet another opposition party, Popular Will.

In 2011, Lopez put himself forward as presidential candidate but later removed his name as he was still barred from holding office due to the corruption charges. His party, which was launched with much fanfare, came in fourth within the opposition coalition.

In the same year, he met numerous times with former Colombian President Alvaro Uribe, purportedly to request his "advice" on "security.” Uribe, who has openly acknowledged working on a continental level against left-wing governments, is being questioned in the Colombian senate for alleged ties to paramilitary groups that have been accused of mass atrocities. Uribe’s own administration was marred with human rights violations including the infamous “false positives” scandal, as well as civil rights violations such as spying on judges, opposition politicians and others.

﻿Lopez (L) with Cuban opposition blogger, Yoani Sanchez (R). Last year, one of Sanchez’s posts was acknowledged to have been crafted at the U.S. State department (Archive).

After numerous attempts to unseat the Bolivarian government by elections, Lopez’s “thirst for power,” as U.S. diplomatic staff called it, may have got the better of him.

In October 2013, Lopez returned to his old stomping grounds in the U.S. and spoke to Venezuelan ex-pats and presented Jose Colina with an award for his so-called human rights work. Colina is wanted in Venezuela, accused of placing bombs at different buildings in Caracas, including the Colombian and Spanish consulates, during the 2002 coup that Lopez also participated in.

At the engagement, Lopez spoke about ‘la salida’ - or ‘the exit’ - of the elected government, just three months before opposition members began violent protests in Caracas under the same slogan.

“We have to hurry the exit of the government … Nicolas Maduro must go out sooner than later from the Venezuelan government. Nicolas Maduro and all his supporters,” said Lopez. “From my point of view, the method is secondary, what is important is the determination to reach our goals at any cost.”

In December 2013, the opposition candidates were handed decisive defeats in municipal elections, with Socialist candidates and allies obtaining over 75 percent of mayoralties, as well as 55 percent of the overall vote.

The late January death of a student in Merida - who was killed by criminal gangs - was the excuse for opposition blockades calling for more security at university campuses. Some people attacked the home of the Chavista governor of Merida while he and his family were inside, prompting arrests.

Lopez and Machado took hold of this, calling on youth to take the streets to demand the release of the “students” arrested. On February 12, thousands of people, some of them students, were in the streets of Caracas and other cities, both for and against the government. However, the opposition protests became violent with protesters attacking official government buildings, including the Public Ministry, where they were meant to end their march.

In the melee, one student was killed by a member of the federal law enforcement, despite having received orders not to engage the demonstrators.

The following days, Lopez became more vocal about a government “exit,” urging “resistance” against the government, which at this point began to take the form of “Guarimbas,” or violent street barricades. 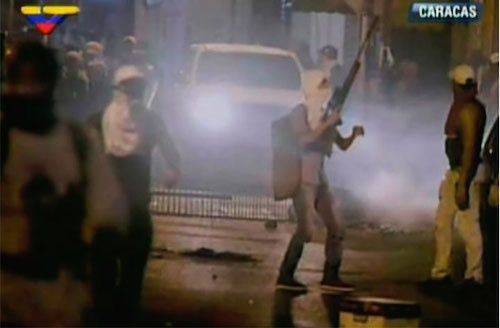 At these barricades, often erected with destroyed public infrastructure such as light posts or trees, protestors would attack police officers and law enforcement, as well as anyone who tried to pass through or remove the barricades. In some cases, wire was placed across intersections at neck level in order to target motorcyclists, a common form of transportation in Venezuela. One motorcyclist was killed after the wire sliced his neck.

Despite the mounting death toll and the continued violence, Lopez insisted people should continue the effort to oust Maduro. During an interview at the time, he was asked when the opposition protests would end. “When we manage to remove those who govern us,” Lopez responded.

Of the 43 killed in the violence following the calls for violent protests by Lopez, the vast majority were killed at the guarimbas, or barricades, including by snipers.

Since then, victims of the protest violence, including the family members of some of those killed, have organized to bring attention to those who remain faceless and nameless following the violence.

So far, they have been largely ignored by those who consider Lopez, who Chavistas consider to be a crusader for a democracy of and for the 1 percent in Venezuela, to be the victim in all of this.

Amid a new wave of right-wing protest violence that has killed over 90 people, officials have said that they hope the sentence giving Lopez house arrest will be cause for the opposition to heed calls for peace and dialogue. However given the new faces of radicalism in the MUD coalition and their strident calls to create havoc until Maduro falls, only time will tell if this is just wishful thinking.

This article was modified from a version originally published in 2015.


by teleSUR/Gustavo Fuchs and Pablo Vivanco