Nigerians are preparing to go to the polls this Saturday in one of the country's closest national elections since the end of military rule in 1999. Incumbent President Goodluck Jonathan from the People's Democratic Party is neck-and-neck with rival and former military leader Muhammadu Buhari from the All Progressives Party, and according to recent polls there is no clear winner in sight. 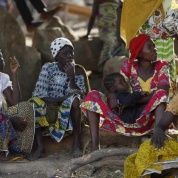 A lot is at stake for Nigeria, Africa's largest economy and most populous country. It is one of the world's largest oil and natural gas producers; it is rife with poverty and corruption; and it has recently been torn apart by violent Boko Haram attacks. The three main issues that have defined the current election campaign have been corruption, insecurity and the bad economy, which both political parties claim will improve under their leadership.

However, Nigeria's current economic and political struggles have roots in decades of foreign intervention in the country, and bad Western capitalist policies towards the region, which cannot be solved so easily.

Nigeria's current political climate is scarred by its colonial legacy, which has had lasting polarizing effects on Nigeria — a country strongly divided by rich and poor, north and south, Christian and Muslim.

When the British took over large swaths of West Africa in the 19th century, the region was home to hundreds of different ethnic groups with different beliefs and territorial strifes. It was not until 1903 when the British drew imaginary political lines around the area and called it Nigeria that these different communities were forced to belong to one nation.

Over the next seven decades, the country saw more internal restructuring with the creation of different regions and states, which shifted the balance of power between the local ethnic groups. The British initially divided the country into three regions, where the major ethnic groups (Hausa-Fulani, Igbo and Yoruba) held dominant positions over the others, leaving minorities at a disadvantage both politically and in terms of access to and distribution of resources. According to Rita Iszak, special rapporteur on minority issues for the United Nations, this created tensions not only between locals and foreign powers, but also between local ethnic groups themselves, which has had lasting effects in the country.

Today there are over 350 ethnic groups in Nigeria, and even more languages spoken between them, according to the UNHCR. Though these communities live in relative peace in most of the country, regional, religious and ethnic polarization is still a harsh reality for many, particularly in the north.

According to recent numbers by the World Bank, 48 percent of Nigeria's population lives in poverty, most of which is concentrated in the northern regions. The south of the country sees relative wealth, mainly because of the oil and natural gas concentration in the Niger Delta region, but this has not benefited all communities in the region, with minorities feeling a large brunt of the environmental impacts and reap less of the economic benefits.

Today, ethno-religious tensions are also high in the country in certain regions, mainly between Nigeria's two dominant religions, Christianity (47 percent) and Islam (51 percent). Though there is no clear geographic divide between the two beliefs, however most of the country's Muslims live in the north, while the Christians are predominantly in the south west.

The most obvious example of religious tension is Boko Haram, the militant group who call themselves Islamists, whose mission is to create an Islamic state. They mostly operate in the north of the country, where inequality and unemployment is highest, attacking Christian and other minorities in the region. However, many Muslims told the U.N. refugee agency (UNHCR) that Boko Haram does not represent them or Islam, which indicates a further inter-religious rift in the north.

The current elections are also an example of the continued regional and ethno-religious divide, with President Jonathan, a Christian, expected to reap most of the votes from the south, and Buhari, a Muslim, is largely supported by the north.

Western nations' bad foreign polices in the region have made the country's polarization worse. Among them, the West's exploitation of Nigeria's natural resources, particularly oil and natural gas.

Nigeria is the largest oil producer in Africa; it has the continent's second largest natural gas reserves; and is among the world's top five exporters of liquified natural gas, according to the U.S. Energy Information Administration (EIA). This industry accounts for 95 percent of Nigeria's export revenue and 75 percent of the government's total revenue.

However, despite this massive energy industry, almost all of it is exported, while many Nigerians experience major electricity shortages or are forced to find other sources of energy.

According to EIA figures, only 41 percent of Nigerians have access to electricity, leaving some 100 million people without light, means to cook or heat their homes, or have to use alternative energy sources. In 2012, 80 percent of Nigeria's energy use came from traditional biomass and waste, including wood, charcoal, manure, and crop residue.

While the Nigerian government profits from energy exports, there has been a large squandering of wealth. Almost 85 percent of that oil revenue goes to just 1 percent of the population, while more than 70 percent of Nigerians live on less than a US$1 per day, according to the African Development Bank.

This poverty has created terrible living conditions for Nigerians: the infant mortality rate is among the highest in the world, school attendance is dismal, with only 54 percent of kids of secondary school age going to school, while the unemployment rate in the country is at 24 percent, according to UNHCR figures.

When international companies invest in Nigeria's oil and gas projects, they are funded by joint ventures with the Nigerian National Petroleum Corporation, or managed under shared contracts with the state. According to the EIA, Shell (English-Dutch), ExxonMobile (U.S.), Chevron (U.S.), Total (France), Eni (Italy), Addax Petroleum (China), and Statoil (Norway) are all currently invested in projects in Nigeria.

Shell in particular has a very distinct history with Nigeria. It worked directly with the previous military dictatorship to suppress local protests, and contributed to major human rights violations.

The Anglo-Dutch energy company was one of the first to start extracting oil in the Niger Delta region in the 1950s, which had a devastating impact on the region's environment and the lifestyle of the local Ogoni people. Oil spills, gas flaring and deforestation destroyed the subsistence farming and fishing-based economy of the Ogoni, who eventually rose up against Shell in a popular movement called the Movement for the Survival of the Ogoni People (MOSOP). When it started to gain traction in the 1990s, Nigerian soldiers — at Shell's request, and with their assistance and financing — used deadly force and conducted massive raids against them in attempts to squelch the movement.

Shell was also implicated in developing the strategy to unlawfully execute a handful of MOSOP members, who became known as the “Ogoni Nine,” and included the movement's leader and founder Ken Saro-Wiwa. One month after the state executed the nine activists, Shell continued to support the Nigerian government and signed an agreement to invest US$4 billion in a liquefied natural gas project in the country.

Though the dictatorship ended in 1999, the Nigerian government continues to use its force to protect the interests of foreign companies, particularly those in the oil and gas sector, rather than the Nigerian people.

As more that 70 million Nigerians go to the polls this weekend to choose their country's leader for the next four years, they will be thinking about the stark economic divisions, corruption and violent turf battles in the country. While their options may be shaped by their tumultuous past and present, whether the victor is incumbent President Goodluck Jonathan or opposition challenger Muhammadu Buhari is for Nigerians to decide.