The release of late Pulitzer Prize-winning author Alex Tizon's essay, “My Family's Slave,” drew a wide spectrum of reactions. Many were brought to tears by the tragic story of Eudocia “Lola” Tomas Pulido, a woman from the Philippines who spent 56 years toiling under domestic bondage to the Tizon family after falling into captivity as an 18-year-old young woman. Some hailed Tizon's honesty and empathetic narrative. Others saw his piece as a weak apology for the enslavement of “Lola” Pulido. 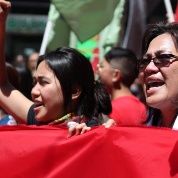 “People should cry about it, but they should also critique it. We are the progeny of women like Eudocia 'Lola.'”

Much of the commentary didn't go far toward grasping at the roots of her exploitation. Nevertheless, Filipina social movement organizers see the article as an opportunity to address and challenge the factors leading to the daily abuse of countless women like “Lola” throughout the world.

“People should cry about it, but they should also critique it,” said Khara Jabola-Carolus, a Filipina community lawyer in Hawaii who chairs the state chapter of transnational feminist group AF3IRM, whose acronym means the Association of Filipinas, Feminists Fighting Imperialism, Re-feudalization and Marginalization. “Our histories are full of pain,” she added.

“This story hit home because we are the progeny of women like Eudocia 'Lola',” Jabola-Carolus told teleSUR. “Those of us who are Filipina grew up around this feudal culture.”

One of the story's problems is the failure to cover a 500-year tradition of household slavery in the Philippines dating back to Spanish colonization, she points out.

Bernadette Ellorin, chairperson of BAYAN USA — the U.S. branch of the New Patriotic Alliance of the Philippines — echoed similar criticisms in a statement released Wednesday.

“Even though Tizon revealed his perspective of the story, there is much more to it starting in the Philippines,” said Ellorin.

At the start of the 20th century, the multiethnic and resource-rich Philippines violently switched hands from Spanish colonialism to United States control, as U.S. sailors and soldiers waged a war of annihilation on the archipelago that claimed around 1 to 1.5 million lives. Decades later, the Japanese invasion during World War II left its own brutal imprint on the country, inflicting vast trauma on the population. At the time when Pulido was passed into servitude, troops of the Imperial Japanese Army busied themselves rounding up groups of men for massacres, either for counterinsurgency or collective terror purposes, while hunting down women who were subjected to various forms of sexual abuse or capture including prolonged "comfort woman" enslavement.

“From the time Eudocia was enslaved in 1943, conditions in the Philippines have only worsened,” said Ellorin.

The country was left in ruins after the war, with 80 percent of the economy simply destroyed. Wealthy local elites continued to serve the U.S. while sidling up to post-war Japan, enriching themselves while ignoring the country's social turmoil unless the poor rose up in rebellion. Successive Philippine governments did precious little to develop the economy or address poverty, instead using their power as “caciques” — local bosses — to secure the rule of mafiosi -style clans with such well-known surnames as Cojuangco, Roxas, Aquino, Estrada and Marcos, while also protecting the interests of U.S. corporations eager to dominate Philippine land and markets.

Export-oriented and import-dependent, the country exemplifies the stark inequalities that neocolonialism entails. While wealthy landlords and urban dwellers live in luxury – often with one or several domestic slaves — Indigenous people, workers and peasants are forced to contend with extreme poverty, crime and state terror.

“More than 26 million of the population live in poverty rooted in landlessness and joblessness caused by domestic feudalism and underdevelopment, as well as widespread corruption and foreign control over the Philippine economy, military, and politics, due to imperialism, particularly U.S. imperialism,” Ellorin noted.

Faced with unrest and the problems of underdevelopment, Philippine elites devised schemes encouraging the outflow of poor people as forced migrants.

“Rather than investing in jobs and development at home, the Philippine government exports people abroad, pushing them away through labor export policy,” Aurora Victoria David, the California-based secretary-general of the National Alliance for Filipino Concerns, told teleSUR. Lured from their homes by government-promoted “job opportunities” abroad, she explained, workers hope to provide for their families through remittances.

According to reports, around 6,000 people leave the country per day. Most of these workers are women, who are funneled into gender-specific vocations: domestic workers, servers, caregivers, nurses, hospitality industry workers, and other jobs. Often, they are subjected to physical assault, sexual harassment, rape, verbal abuse and emotional torture.

“Once you exit U.S. borders, 'Filipina' becomes a synonym for 'prostitute' and 'maid,'” Jabola-Carolus said.

According to a study by the Walk Free Foundation, out of 10 million overseas Filipino workers, 401,000 were trapped in conditions of modern slavery in 2015.

The National Domestic Workers Alliance recently issued a report profiling “modern day slaves.” In one case, a Filipina domestic worker arrived in the U.S. on an H-2B guest worker visa expecting room and board working as a cleaner. Instead, her employers forced her to sleep in a roach-infested shipping container along with three fellow captives. Rather than being provided meals by the company, the workers were forced to collect food from trash cans.

Another worker in the report named “Judith” — whose name was changed to protect her anonymity — left the Philippines to work for the family of a Japanese diplomat in New York, where she had been promised an US$1,800 monthly salary plus benefits. Instead, her passport was seized and she was given US$500 per month to toil for 18 hours per day in domestic servitude, regularly facing physical abuse. With the help the Damayan Migrant Workers Association, Judith managed to free herself the next year.

Many captive workers aren't fortunate enough to liberate themselves from coercive labor arrangements. Instead, they're forced into sex trafficking rings, die at the hands of employers, or are simply disappeared. Jennifer Dalquez currently sits on death row in the United Arab Emirates after an Abu Dhabi court sentenced her to death for killing an Emirati police officer in self-defense as he tried to rape her. In one case, a Philippine government official in Saudi Arabia forced abused women to have sex with Middle Eastern men if they wanted a return flight home.

RELATED:
After Historic Women's March, Can IWD Strikes Radicalize Resistance in the US?

“Sexual and domestic servitude have become the best survival option for most poor women of color,” Jabola-Carolus said.

“Who's accountable?” David asks, before quickly offering an answer: “The United States and Philippine governments.”

Migrants are caught in a catch-22, David explains. The dire conditions in the Philippines enforced by the U.S. ensure a steady stream of “forced migrants” from the country, but the rise in immigrant scapegoating and criminalization in countries like the U.S. forces migrants into the margins of society, where abuse is rampant.

While Filipina organizers like Jabola-Carolus, David, and Ellorin have differing political outlooks, they agree that only an overturning of the wretched and humiliating social conditions faced by the Philippine people in general — and women specifically — can prevent others from suffering the trials of “Lola” and her global counterparts.

“We believe that unraveling current systems and building more humane ones will require independent feminist movements that have a sense of strategy,” Jabola-Carolus said, noting that her Honolulu-based group fights against sexism while also struggling for affordable housing access as a means of building women's economic independence and decreasing their vulnerability to violence and exploitation.

“Future 'Lola' situations can be prevented,” David said, “but only if we address the poverty in the Philippines and create conditions where resources are actually used to benefit the majority of the people as opposed to a few landlord and corporate families.”

Ellorin also sees the task as one requiring the active involvement of social movements fighting for genuine systemic change: “Only through changing the system can we see an end to modern day slavery and create a world where women can stay in their homeland and live full and dignified lives.”