The WTO: unelected parliament of big business, an organization where corporations lobby for their rights and for “free” trade, businesspeople clucking around in their ten thousand dollar hotel suites, choosing their pillows from pillow menus, deciding over unimaginable thousand dollar banquets to take over whole countries’ markets, to let people die from preventable diseases so their pharmaceutical companies can keep making psychopathic profits, to watch on, as though it were a boring movie, as farmers continue to commit suicide as they are forced to purchase what they previously produced locally. 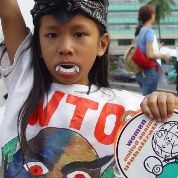 After the signing of the Marrakesh Agreement on April 15, 1994, the World Trade Organization officially commenced on Jan. 1, 1995. As the global organization that deals with the rules of trade between nations, with businesspeople and governments singing agreements, it handles trade disputes and, though unelected and unaccountable, monitors national trade policies. Corporations have used it to dismantle hard-won environmental protections in different countries, calling such statues “barriers to trade.”

The WTO defends patents, copyrights, and trademarks at the expensive of health, human lives, and scientific and creative development. It also supports the trend of many of the world’s poorest countries have been forced to export more and more primary commodities, such as metal ores or coffee, the prices of which have dropped, while the prices of what such countries import has increased, thereby deepening the already unreasonable global inequality.

Seattle, November 1999 – Protests take place around the WTO ministerial conference, which was to launch the new millennial round of trade negotiations. At least 40,000 people attend.

​Sydney, November 2002 – Police attack anti-WTO protesters and arrest at least 50, after the state government outlawed marches. People chant “WTO you’ve got to go” and “WTO and CIA are the real terrorists of the world today.”

Cancun, September 2003 – A South Korean farmer dies after stabbing himself on police lines, as hundreds of international protesters try to pull down a security fence. A colleague of his says, “Korean farmers’ lives are devastated by WTO policies.”

Hong Kong, December 2005 – Thousands of anti-globalization activists, some dressed like chickens and others carrying a big spider (WTO protests are renowned for their creativity), hold a series of marches against the WTO.

Geneva, November 2009 – Police use tear gas and rubber bullets on protesters outside a WTO conference.

Moscow July, 2012 – Thousands protest against Russia’s entry into the WTO, a move that would make it subject to its rules for global trade and dispute settlement. Organizers say it will see the collapse of tens of thousands of Russian factories and the loss of millions of jobs.

Bali, December 2013 – Hundreds protest under a coalition of farmers and fishers against the WTO meeting in Bali.

#today: anniversary of the 1999 #WTO Conference and the anti- #freetrade protests aka the Battle in #Seattle pic.twitter.com/plOuyMWoSw