One of the mightiest South American waterways – Rio Paraguay – is forming a national frontier between Argentina and Paraguay, two countries with similar cultures but diametrically different political systems. 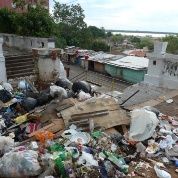 Argentina is socialist, with free medical care and mostly free education. It has a progressive government. It sent its creditors, the World Bank and IMF, packing. It defaulted its debt, which was accumulated during the right-wing and pro-Western governments (Greece should study and follow Argentina’s model). It is increasingly close to other socialist Latin American countries, and also to non-Western powers like Russia and China.

Paraguay is a divided country. Even according to the BBC, fewer than 2 percent of the landowners are said to control 70 percent of its arable land. Other sources put the number to 75 percent and higher. Periodically, indigenous people demand their land back, and periodically, they get murdered.

Paraguay used to be the second poorest country in South America, right after Bolivia. But with enormous positive changes taking place in Bolivia during the last decade, Paraguay is now hitting the continent’s rock bottom.

The elites backed by the U.S. had orchestrated a “constitutional coup” and ousted President Fernando Lugo, a progressive liberation theologian. It happened on June 22, 2012. The country's short romance with socialism ended. Fascism returned. Paraguay fell back to its terrible historic role: once again it became a place that hosts the U.S. military bases, which promotes Western imperialism; a place from where all of South America is being spied on and manipulated.

Paraguay is, after all, where the deadly Operation Condor was launched from, and where the “Archives of Terror” were unveiled.

There is great misery all over Paraguay. Slums come right to the back walls of the monumental government buildings and banks. Hospitals are huge, but hopelessly inefficient and overcrowded. Broken roads and narrow sidewalks lead to malls and skyscrapers of Asuncion. There is hardly any public transportation. Floods are devastating entire communities.

Across Paraguay River, the small Argentinie town Clorinda is unpretentious, good-natured and endlessly touching. Its leafy streets are wide. Its main square had been converted into one huge playground, used by both children and adults. Sidewalks are wide and food is honest and good. It is very egalitarian, and much richer than that flashy and socially divided Paraguayan capital just across the river. It has lesser than 50,000 inhabitants, but it is fully self-sufficient.

Before I managed to cross the river on makeshift barge, few Paraguayan truck drivers were chasing me, stones in their hands, for my attempt to photograph the port. Apparently, almost next to the customs post, corruption, contraband, and black market have been thriving.

But in Clorinda, at the Argentinian side, it had been peaceful and quite.

My contact, Carlos, was waiting for me. My passport got stamped and we began driving toward the city. Just two minutes from the border post I spotted wooden structure, on the shore of a swamp.

“It is new school for Paraguayan children,” explained Carlos. “As you saw, parts of Asuncion are terribly inundated. Many poor people there lost their belongings, but also their ability to send children to school.”

I could not comprehend what he was saying:

“But how can this school help poor Paraguayan kids?”

“Well, the Paraguayan parents bring their children here, to Argentina. There are several schools that opened in the border area.”

“You mean, they are taking care of foreign children, here?”

In front of my eyes I still had those crushed refugees from Africa, who have been harassed in Italy, Malta and Greece; refugees from unfortunate countries that were destabilized and destroyed by the European Union and by the Empire. These people could count on no support, no sympathy! Their ships were towed away. Some were prevented to land. Those who managed to land, ended up in despicable camps.

And here, in Argentina…

“Is it how most of Argentines see it?” I asked.

“Is it really true that hundreds of Paraguayan citizens are crossing the border to Argentina, in order to get free medical care in local hospitals?”

“Yes,” replied Sra. Miriam. “But I think there are thousands, not hundreds...”

“And they are all treated for free?”

Earlier, I asked my friend in Asuncion, a doctor, what happens if the case is complicated? What if it is a cancer? Would Argentines still be willing to help? He explained, that smaller hospitals like that in Clorinda simply transfer seriously ill patients to much bigger and better equipped medical centers like those in Formosa. Free of charge? “Naturally,” I was told “They really mean it in Argentina ... They are convinced that education and health are basic human rights.”

While I was talking to Sra. Miriam, a doctor came in, carrying steaming cup of coffee.

I was impressed, moved to tears. But I still could not believe what I was hearing:

“I understand that Argentina has free medical care ... But people who cross the river are not Argentinian citizens, they are Paraguayans.”

The doctor looked at me with his mocking, tired but very kind eyes. He put one hand on my shoulder:

“To me, they are not Paraguayans or Argentines. They are people who feel pain, and who need my help. They are patients and I am their doctor.”

“And this is Latin American socialism,” I thought. “And to hell with anyone who tries to undermine it!”

Andre Vltchek
Andre Vltchek is a philosopher, novelist, filmmaker and investigative journalist. He covered wars and conflicts in dozens of countries. His latest books are: “Exposing Lies Of The Empire” and “Fighting Against Western Imperialism”. Discussion with Noam Chomsky: On Western Terrorism. Point of No Return is his critically acclaimed political novel. Oceania - a book on Western imperialism in the South Pacific. His provocative book about Indonesia: “Indonesia – The Archipelago of Fear”. Andre is making films for teleSUR and Press TV. After living for many years in Latin America and Oceania, Vltchek presently resides and works in East Asia and the Middle East. He can be reached through his website or his Twitter.
Loading...
Comment
1

Sign In Register
Order by
ignasi orobitg gené
The martyrdom of Allende flood of socialism hearts worldwide
Reply
Post with no popular comments.