Over 24 million Peruvians are called to head to the polls on Sunday's runoff election to elect the Andean nation's president for the 2021-2026 period. 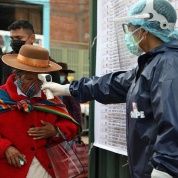 The polling stations will be open from 07:00 and 19:00. The voting process will be conducted in a staggered manner according to identity card numbers to avoid crowds and protect the elderly population.

In the case of Peruvians living abroad, the National Office of Electoral Processes (ONPE) installed 3,440 voting tables in 79 countries. There is also the "JNE Denuncias Extranjero" so these voters can denounce electoral irregularities.

The electoral authorities will set up 13,574 special tables and use 12,300 Braille templates to facilitate people with disabilities' votes.

Mere days before Peru's presidential election, far-right candidate Keiko Fujimori was pelted with garbage as she rode through Arequipa, the biggest city after capital Lima.

Observation missions from the European Union (EU), the Organization of American States (OAS), and the Inter-American Union of Electoral Organizations (UNIORE) will monitor the elections.

This week some electoral restrictions started to be implemented such as the prohibition on electoral results poll and candidates' political propaganda's broadcasting. From 8:00 a.m. on Saturday until 8:00 a.m. on Monday, the sale of alcoholic beverages is also prohibited.

The National Jury of Elections (JNE) will give the first report on election results at 23:30 hours on Sunday when Peruvians will have to decide between leftist candidate Pedro Castillo or right-wing politician Kiko Fujimori.