A multi-million dollar Australian Government funded project at the University of Sydney, linked to spin doctors in Washington, is using a biased and secretive method to help discredit elections in a range of ‘enemy’ countries. 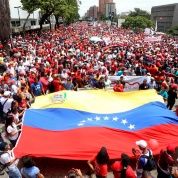 A key target is socialist Venezuela, which is facing yet another destabilisation campaign, backed by Washington. The recent rounds of violence began in early 2014 and recently led to the arrest of several opposition figures for murder and coup plotting. The pretext for the violence has been that the government of President Nicolas Maduro is somehow democratically illegitimate.

However the radical, popular ‘Bolivarian’ governments have won 12 of Venezuela’s last 13 elections. Further, 80% of the voting age population participated in the 2013 election, won by Maduro (International IDEA 2015). That is a massive increase on 1990s levels, when the Chavez phenomenon effectively sidelined the old and moribund two party system. And the electoral system is secure. Even the political journalist for anti-government paper El Universal described Venezuela’s electoral system as ‘one of the most technologically advanced verifiable voting systems in the world’, with protections against fraud and tampering and scrutineered random recount mechanisms (Martinez 2013).

Sydney University’s ‘Electoral Integrity Project’ tells a very different story. According to their 2015 report, Venezuela’s Presidential election in 2013 was one of the worst in the world, ranking 110 out of 127. They corroborate their data with a survey claiming President Maduro only had a 24% popularity rating, with ‘85% believing that the country was heading in the wrong direction’ (Norris et al 2015: 31). The EIP did not mention the Hinterlaces Polls, which have had Maduro’s popularity (during the recent crisis) ranging from 39% to 52%; nor do they cite polls showing overwhelming rejection of the opposition’s violent attempts to remove the elected president (Dutka 2014).

The EIP produces an impressive forest of data to form its rankings on the legitimacy of elections worldwide; but what is the basis for all these numbers? Though it is not so easy to find, the method involves selecting a range of criteria and then seeking ‘expert opinion’, from a group of unnamed people. That is, the numbers and rankings rely on ‘expert opinion’, and those experts are anonymous.  There is only anecdotal recourse to more standard methods, such as actual opinion polls, or actual participation rates.

Yet popular and expert perceptions are a curious thing. As most mass media remains in the hands of a tiny oligarchy, for whom Venezuela has long been a ‘black sheep’, image shaping is often distorted. Surveys by the Chilean-based company LatinoBarómetro (2014: 8-9) illustrate this point very well. The image of Venezuela’s democracy fromoutside the country is rather ordinary (seen as 41% and 47% favourable, between 2010 and 2013), whereas within Venezuela it is very different. Venezuelans rate their democracy at 70%, the second highest (after Uruguay) in Latin America.LatinoBarómetro (2014: 9) itself is surprised by these results, saying: ‘The five countries which most appreciate their own democracy are countries governed by the left: Uruguay, Venezuela, Argentina, Ecuador and Nicaragua … the democracy of which citizens speak is clearly not the democracy of which the experts speak’.

Yet surely any democracy is best judged by those who are able (or unable) to participate in it? The opinions of expert outsiders seem of little relevance. That is an elite approach. The International Covenant on Civil and Political Rights (Art 25) describes democratic rights this way: ‘the right and the opportunity … to take part in the conduct of public affairs, directly or through freely chosen representatives’. That refers to the right of citizens in a particular body politic. Gauged against this principle, the method of EIP project, relying on outside expert opinion, seems poorly conceived.

Yet an elitist approach is consistent with the model promoted by the National Endowment for Democracy (NED), a US government funded body launched by the Reagan administration in the second cold war of early 1980s.  The NED (usually through intermediaries) funds a range of organisations in attempts to shape democracies or ‘civil societies’, to make them more friendly to or compliant with Washington. One of the founders and first President of the NED, Allen Weinstein, said in 1991, ‘A lot of what we do today was done covertly 25 years ago by the CIA’ (Lefebvre 2013). Indeed, as with the ‘psy-ops’ of the CIA, the NED has been implicated in coups and destabilisation plans in a range of Latin American countries, including Nicaragua, Haiti and Venezuela (Kurlantzick 2004; Lefebvre 2013; Golinger 2006). The NED idea of democracy has been described as ‘[a] top-down, elite, constrained (or “polyarchal”) democracy … [where] the elites get to decide the candidates or questions suitable to go before the people’ (Scipes 2014). French researcher Olivier Guilmain (in Teil 2011) says that the NED finances opposition parties in numerous countries and provides special aid to exiles and opponents of regimes targeted by the US State Department’.

Eva Golinger, whose book The Chavez Code exposed the Bush administration’s involvement in the failed coup of 2002, has documented the NED’s contribution to destabilisation and coups in Venezuela. In the last year or so the NED has spent many millions on Venezuelan opposition groups ‘including funding for their political campaigns in 2013 and for the current anti-government protests in 2014’ (Golinger 2014).  She calls this ‘the same old dirty tactics’ of a coup in motion (Golinger 2015).

It might not come as a surprise then, to find that there are indeed NED and other US Government links to Sydney’s Electoral Integrity Project. Chief investigator Professor Pippa Norris proudly lists her work as a consultant for the NED, and at least six of the project partners (without whose support the EIP ‘would not have been possible’) have direct US government funding. The EIP method of relying on expert opinion seems quite consistent with that ‘elite, constrained … democracy’.

Worse, the EIP relies on anonymous opinion. A member of the project clarified this to me in these words: ‘we have to maintain the confidentiality of our sources as part of our legal obligations … revealing the names of the experts could potentially risk putting them in harm’s way in several states which do not respect human rights and which suppress critics’. Be that as it may, the opinions of anonymous people provide no way to assess the legitimacy of an independent state. It contradicts the principles of openness and transparency, values the EIP claims to both assess and promote. Who are these anonymous experts? Do they include opposition figures in the countries whose governments are under attack? Do they include the Washington insiders who advise on destabilisation and coup plans? There is little indication the EIP takes seriously the well-established principle of avoiding conflicts of interest.

It is also alarming that the EIP, as an Australian Government (ARC) funded academic project, whose subtitle (‘Why Elections fail and what we can do about it’) suggests a measures of praxis, shares the Washington phrase ‘failed elections [which] raised major red flags’, mentioning several states, including Syria. It is well known that a major military intervention in Syria was narrowly averted in September 2013, after false claims that the Syrian Government had used chemical weapons against children (for evidence of the falsity of these claims see: Hersh 2013 & 2014; Lloyd and Postol 2014; ISTEAMS 2013). Does the EIP seek to associate itself with ‘red flag’ military interventions, if countries fail to meet its dubious criteria?

The project rated Syria’s 2014 presidential elections near the bottom of its chart (125 of 127), on the basis of its anonymous expert opinions (Norris et al 2015: 11). The only rationale for this can be seen in a brief note which observes ‘the election was deeply flawed because some areas of the country were not under government control, so polling did not take place in the regions where insurgents were strongest’, and the fact that ‘National Coalition - the main western backed opposition group’ boycotted the election (Norris et al 2015: 27). While these are correct statements, they do not tell the whole story. Conflict in other countries did not seem to bother the EIP or its experts quite so much when they ranked the Ukraine election at 78 of 127 (Norris et al 2015: 10). Yet the election monitoring group International IDEA (2015), an EIP partner, puts participation rates in the Ukraine’s 2014 presidential election at 50%, while in the Syria’s 2014 presidential election it was 73%. Clearly the US foreign policy factor is at play. Washington arms the ‘opposition’ in Syria and the government in Ukraine. Similarly the NED has directly funded the Syrian opposition (NED 2006; Teil 2011; IRI 2015) while urging military support for the Ukraine government (Sputnik 2014; see also Parry 2014).

Finally we might observe that Israel’s 2013 elections were duly reviewed by the EIP, leading to a very healthy 17/127 ranking (Norris et al 2015: 8). Apparently being a racial state, with several million effectively stateless Palestinian people, held in military-controlled territories and with virtually no civil or political rights, has little impact on the EIP assessment. Yet this is consistent with what the Washington-Tel Aviv axis has long told us about Israel as ‘the only democracy in the region’ (e.g. Goldman 2015, etc). The double standards are breath-taking. With the Electoral Integrity Project’s US links and its elitist assumptions about democracy it seems the project has little sense of conflict of interest, let alone appropriate research method.

Lefebvre, Stephan (2013) ‘Analysis from National Endowment for Democracy Used in The Atlantic, with Significant Errors and Omissions’, Center for Economic Policy and Research, 30 July, online:http://www.cepr.net/index.php/blogs/the-americas-blog/analysis-from-national-endowment-for-democracy-used-in-the-atlantic-with-significant-errors-and-omissions

Martinez, Eugenio (2013) ‘Venezuela's Election System Holds Up As A Model For The World’, Forbes, 14 may, online: http://www.forbes.com/sites/forbesleadershipforum/2013/05/14/venezuelas-election-system-holds-up-as-a-model-for-the-world/

Norris, Pippa; Ferran Martínez and Max Grömping (2015) ‘The year in Elections, 2014’, Electoral Integrity Project (Why Elections fail and what we can do about it), online:https://sites.google.com/site/electoralintegrityproject4/projects/expert-survey-2/the-year-in-elections-2014

Tim Anderson
"Tim Anderson is an Australian academic and writer. A Senior Lecturer a the University of Sydney, he researches, writes and teaches in the areas of economic and human development, international cooperation, self-determination and development stategy. His most recent book is 'Land and Livelihoods in Papua New Guinea."
Loading...
Comment
0