If you come to the U.S. from South Africa, or Latin America or China, first thing that hits you is how cold and heartless most people of the Empire really are. 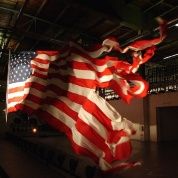 There is rationality or what is left of it. There is some efficiency - not much but at least some. But interaction between people is as cold as ice.

People are edgy. Behind their plastic smiles and “have a nice day” and “take care of yourself” phony statements, there is void or great tension. You rub them the wrong way and they start exploding verbally, even insulting you.

It is extremely unpleasant society; messed up, confused. Its emotions are upside down; its values are too.

Every year I receive thousands of letters from my readers in the United States. Most of them come from my supporters, but most of them are also full of complaints, weeping, how no one understands them, how alone they feel, how there is nothing they can do. Many readers demand that I engage in regular correspondence. When I don’t, insults often follow.“Go and write this or that!” orders from North American couch potatoes are common. Such arrogance and lack of manners!

It does not happen with readers from any other part of the world. U.S. readers are extremely demanding. They want attention, compassion, pampering. They think that they own the world.

The fact that I hardly sleep, working day and night in destabilized, often ruined (by the West) parts of the world gets me absolutely no extra ‘mileage.’

They want everything for free. They want everything. Instead of supporting my work, they keep demanding, they want to be pitied, and counseled. They demand personalized lessons: “please write to me all about Western imperialism. I am willing to read and consider.”

I am usually trying to avoid North America, but once in a while I have to come: to attend some conference, to launch a book or a film, to give a few talks.

This time, in June 2015, I presented at Whitehead Conference in Claremont, California, and then I traveled with radio host Dan Yaseen to Monterey, Fresno, San Jose and Berkeley, giving talks at various peace centers, encountering “progressive groups.”

I was not impressed. Far from it! Knowledge about horrendous plunder performed by the Empire was shockingly minimal. Participants were predominantly white, most of them well over 70 years old. I was asked on several occasions “why am I telling them all this?”

It was clear to me - patently clear – that in the U.S. these “opposition groups” are holding no power and have no future. It was “feeling good about ourselves” set of events. Two hours with me, then back to oblivion and passivity. And these were the best ones!

My conclusion and advise: Energy of those of us who are fighting the Empire should be spent on supporting real revolutions and real opposition to Western imperialist rule: for instance that in Latin America, in South Africa, China, Russia, Eritrea and Iran.

Otherwise we will arrive at total, grotesque absurdity. Trying to sensitize and convince stubbornly ignorant and indifferent people of North America and Europe would be similar to listening to and dealing with economic and other grievances of German citizens during the WWII. I am not ready for it. They are not my allies, and they are not my comrades! They created and they are upholding this monstrous global regime. Let them deal with their own shit!

Even circulating in “progressive circles” of California, I kept hearing rhetorical questions... Like:

“If Latin American revolutions are so great, why do millions of people want to emigrate to the United States?”

My reply was always the same: “Certainly, after robbing entire continent for decades and centuries, and after continuous propaganda onslaughts, promoting the U.S., Europe and savage capitalism as ultimate paradise on earth, there are certain multitudes in Latin America ready to abandon their homes in search for promised land.”

Of course we all know what happens to most of them, after they hit those shores “paved with gold.”

During this journey, I met some great North American thinkers. I debated Christianity and its crimes against humanity with John Cobb, arguably the greatest Christian topologist and philosopher. Two years ago we met in North Korea, both members of Ramsey Clark Peace Delegation. He invited me to present at the conference, which he was organizing. Great person, great debate, but John is now 90.

In Berkeley, I finally met Michael Parenti. We had worked together on two books – one his and one mine. But Michael is 82.I was told that young people were too busy enjoying what Empire has to offer. Not my cup of tea, their perception of “fun.” But it’s hard to call majority of North Americans “victims.”

*
In Latin America, Asia, Africa and the Middle East, we don’t have time for those “crying babies” of the Empire.

Our world is under savage attacks. We have to defend our gains, our revolutions.

They have no desire, no guts, no plan, and no knowledge to change their country or the world. For better, I mean, for better ... Some, very few of them, say: “Peace! We don’t want war.” And what? The rest of us should fell on our backsides and scream “Bravo!” or give them medals?

Oh no! It would take much more to impress us. Let us not forget that until now, most of the citizens of the West are enjoying tremendous benefits and standards of living exactly because the rest of the world is being plundered, even burned to ashes!

In California I spoke, I was interviewed, and I showed my films. I think I achieved nothing! Next time I will think twice before accepting invitations to the “Land of the free.”

For two weeks I lost my ability to write. I felt exhausted and disheartened, as if being in some horrible, feudal client state of the Empire: Uganda, Indonesia or the Philippines. The Empire was busy brainwashing its colonies, until it managed to brainwash its people, too.

I cannot afford to shower the citizens of the Empire with generosity, free labor and aid! And generosity and aid as well as free education (from me and others like me, not from the state) that is what they are demanding.

Before showing parts of my films about countless horrors committed by the Empire in Africa, I was instructed: “People in California are sensitive. Please do not show the scenes that are too graphic!”

I finally had enough! I do not want to play this idiotic game, anymore!