Our Planet Earth is heading straight towards the most dangerous collision in its history. It is not a collision with some foreign body, with an asteroid or a comet, but with the most brutal and selfish chunk of its own inhabitants: with people who proudly call themselves “members of the Western civilization.” 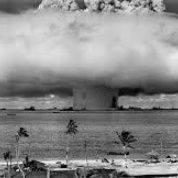 Again and again it is clearly demonstrated that Western culture, which the paramount psychologist Carl Jung used to call “pathology”, couldn’t be trusted.

This “culture” had already mercilessly slaughtered several hundreds of millions of people in all corners of the world; it enslaved entire continents, and plundered all that had any value, whether it was located above or under the surface of earth.

Inhabitants of Europe, the United States, as well as rulers of the client states, showed chilling indifference towards the suffering of their victims.

They also demonstrated utmost ignorance and the highest level of indoctrination!

For centuries, citizens of France, United Kingdom, Belgium, Spain, Portugal and other Western nations were staring at the battle ships leaving their shores, sailing towards Asia, Latin America and Africa ... Mouths open wide; they were pretending that they did not really know what horrors these ships were going to spread. When the ships returned, packed with slaves and unimaginable booty, they shut down their brains, claimed ignorance once again, attributing thriving of their cities and states to some “Western ingenuity, enterprising spirit and hard work,” but definitely not to terror, rape and appalling plunder of the world.

What Germans did, gazing at the chimneys of the concentration camps that were regurgitating thick smoke of the victims of Holocaust and then claiming that “they did not know”, was exactly what all Europeans did for centuries and millennia, when their troops and “investments” into all sorts of Crusades, were looting and brutalizing everyone on the surface of our Planet.

Throughout the history, holocausts have been performed, again and again, all over Africa, in the Middle East, in Latin America, Caribbean, sub-Continent, and Asia Pacific, even in Oceania.

The Westerners never lifted a finger to stop crimes that their states have been committing! As long as they were getting fat, why should they? Their servile and cowardly intellectuals are still refusing, with some tiny exceptions that do not constitute even 1 percent, to depict gruesome destruction, humiliation and torment of “the others”. Western philosophers are locked at the sclerotic institutions called universities, whoring for tenures, instead of describing the world in all its sickening dismay. The media and artists are not fairing any better.

The role of Christianity has been vast and monstrous. In a foreseeable future I will dedicate an essay that will describe its responsibility for the global genocide, as well as a slender but provocative philosophic book on the same topic, co-authored with one of the leading Christian theologians. Christianity (even its non-religious forms called “secularism” or “atheism”) has been spreading intolerance, bigoted dogmas, exclusivism and complexes of superiority. It offered justification; it even inspired the crusades, colonial expansionism, mass murder as well as destruction of entire local cultures.

And yet, the same bandit nations, the same cowardly but sadistic culture, the same perverse religion, are still clinging to power, still torturing and murdering the millions.

Their gangrenous sisters, capitalism and nihilism, are brainwashing people all over the world, while driving them into dark valleys of despair.

War after war, genocide after genocide, the Westerners are still playing dumb! They refuse to acknowledge whet they are doing to the world.

When over 100 French people died during a bizarre recent string of attacks in Paris (who was behind them? West’s allies - jihadists, or maybe their own establishment?), Europeans began mourning their own victims – and pointing fingers at “the others”. People all over the world, either too scared to say “no” or too brainwashed as well, began expressing solidarity with the French nation.

Part of “The Jungle”, a terrible refugee camp near the French city of Calais, went ablaze. Refugees got attacked all over Europe, as “retaliation”. But retaliation for what? After all, refugees were only escaping their countries that were ruined and plundered by both Europe and the United States!

But this is not how a common European was instructed to see the world.

The common European and North American is much more submissive to the regime, than a common inhabitant of any other part of the world. He or she learns what is required to be learned, listens attentively what the media/propaganda people digest and serve. Debates are almost always within the permitted framework.

A common citizen of a Western country devours hours of bizarre entertainment daily (including “news entertainment”). They watch dozens of propaganda films and clips, every year. He or she can hardly make any distinction between reality and fiction, anymore. Such a citizen is willing to sacrifice billions of men, women and children all over the world just for their own material benefits and wellbeing.

All he or she knows, all he or she feels is (somehow abstractly) is that they are somehow “superior” to the rest of humanity; that their culture is exceptional and predestined to rule the world. All heor she senses is that he or she has the right to consume and to use all the natural resources of the world, and that their government can decide which country outside the Western realm should be allow to stand and which would be forced to fall.

Millions of human lives lost in the Middle East, tens of millions of men, women and children murdered by imperialism in Africa? Who cares? Who bloody cares? Westerner eats, copulates, sometimes works and then he either tries to enjoy his life, or he fights for much better benefits... for himself, or for herself. Rest of the world is there to provide or to subsidize such benefits; that is all.

The dumber they, the Westerners, are, the more self-assured and arrogant their worldview. You see people like this in a pub, but you also see them controlling all international organizations, even the UN agencies. Those big, beefy, tall Germans, Scandinavians, North Americans, Brits - speaking with air of a stone superiority to those “agile Asians, clumsy Africans and insecure Arabs”! Telling them what to do, how to run their societies. Absolutely no shame! You would never hear them lamenting: “We fucked up the world. We raped the planet. We are still doing it...” Never.

No apologies, no remorse, no grand plan for how to reverse the flow, how to return at least some part of what had been stolen and how to stop murdering.

Of course, everywhere you go, you read stuff like “May Peace Prevail on Earth!”

Yes, over 100 people died in Paris. Right before that, almost 50 died in Beirut, Lebanon. While thousands are dying in Yemen, every month... While 17,000 already vanished in Iran – victims of West-sponsored terrorism... While hundreds of thousands have been dying in Libya and Syria... While millions have been dying in Somalia and Iraq... While some 10 millions already died in a looted and raped DRC (the Democratic Republic of Congo) … All of them victims of Western assaults and banditry or of Western-sponsored terrorism directly!

All those Mujahedeen, al-Qaida, al-Nusra, IS... That entire Wahhabi fundamentalism created first by the British and later North American imperialism. All that vile, toxic stuff that had been armed, and financed and serviced by the Europeans, as well as Saudis, Turks and other great allies of the West.

And why was that stinky stuff so diligently armed and financed? So it could ruin and destroy progressive, socialist Islam, from Egypt to Iran to Indonesia! So it could destroy the Soviet Union and any Marxist roots in Afghanistan! So it could murder millions of progressive people in those proud and independent nations. So the West could rule, unopposed, grabbing all it wants, deciding who will be governing where!

Now Russia stands against the terror with its fighter jets. Its bombers are flying sorties for survival of this humanity. Just recently, Russia already paid a tremendous price, and we all know what it was. But it is used to paying unimaginable prices, for the survival of our planet. 25 million human lives in just one war, in order to defeat Nazism. Or great chunk of economic output of the USSR, “just” in order to defeat Western imperialism and colonialism.

Syria managed to shock the world by refusing to surrender, by fighting with unimaginable heroism against all odds. Half of its people are on the move, millions of refugees are flooding all shores, but the country is standing tall, injured and bleeding but standing, nevertheless.

And so is Latin America, despite all those vicious attacks from the West. Standing, damn it, standing towering and proud!

And those ignorant, selfish, brutal hordes in the West see nothing. They repeat propaganda injected to their heads, providing slight variations to it, calling it freedom of expression!

After the “Paris attacks”, Western propaganda is in top gear once again. Its apparatchiks were clearly “prepared and ready”. Future direct attacks against Syria are already “justified” well in advance. Not against ISIS (although that would be the official pretext), but against President al-Assad and his government which is, despite everything, supported by the majority of Syrian people. Attacks against Syria will not be called “Western terrorism”, but something like a “heroic revenge”.

Can this planet be entrusted to those who watch crap on their television screens, day after day – both Hollywood propaganda production, and news propaganda briefings?

Can anything that comes from the West be taken seriously, after centuries of lies and murder?

Who is killing whom, lately? Who is behind what?

I will stick to what I know. And what I know is who is actually killing millions in the Middle East, Africa and Asia.

I will not speculate about some “insider job” of the Empire, although I have some strong suspicions; of course I do! For now I will only stick to facts that I can prove.

And the facts are simple and horrendous: the Empire has been murdering tens of millions of people on our planet. The Empire, and that self-perpetuated ignorance, fundamentalism and blindness of its indoctrinated citizens!