The Arepa is the fundamental base of the Venezuelan diet, but certainly, it is also present in other countries of the region like Colombia. Between these two nations exists a silent fight about who invented it. 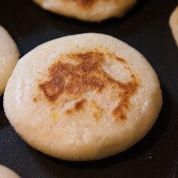 But the truth is that it is hard to determine the origin of the Arepa, because at one point in the history of the continent, both countries shared territory, so, the indigenous, who are those responsible for its creation, were spread all over the land.

It is important for those who do not know the Arepa outside its precooked corn flour version, to explain a bit about how this Latin American bread originated. Turns out it comes from the basic diet of the indigenous, that consisted in yucca, hunted elements such as fish, collected vegetables and corn.

The first stage of the Arepa was a process where the indigenous women chewed the corn and put it onto a plate or base until forming a paste or dough that was later cooked in ceramic in circled forms. The second phase, consisted in the corn being processed or crushed with two stones. This variation of  Arepa making has many types, but they all have in common the incorporation of an object to process the corn to a more malleable form. Last but not least, the invention of the Pilón comes along, which is a wooden appliance that is basically cut from a tree with a carved cavity where the corn is placed and crushed with a mallet from the same wood. The corn is processed in this sort of big mortar.

What's particular about this way to make Arepas, is the fact that it is still being made this way in some Venezuelan kitchens. But because of how laborious it is, it has become a special variation called Arepa de maíz pilao (or Arepas of crushed/malleted corn), for that use of the mallet to process it. This is an Arepa that not only has a less refined texture, but is also cooked in a fireplace exclusively or on barbecues. It is a whole experience.

This Arepa of Maiz pilao or Arepa pelada, stayed as a method through many years, until the 1950s, with the vertiginous industrialization process that brought us here, the precooked corn flour or meal was invented, just needing water and salt to create an homogeneous dough that can be cooked and eaten in many different ways. Heres where the Arepa got diversified and internationalized, because it became easy to make, at least in its basic form.

Throughout the Venezuelan territory, you can find and infinity of types of Arepas, not only made out of corn, but also of yucca or plantain or a mixture of these two with corn. Also there are versions with cheese, little pieces of chopped pork rinds and many more, that are possible thanks to the neutrality of the flavor of the basic dough.

Bringing back the Colombia-Venezuela discussion, when the separation of territories happened, the way of consuming Arepa also split. The Colombian Arepa has different uses and is consumed differently, there's even a difference in the recipe for the dough, which is similar to the maíz pilao version, but its taste, even when delicious, is different, and became popular in other ways like the famous Arepa de huevo or egg Arepa, which is a fried Arepa, opened, with an egg on the inside and fried again.

On the contrary, the Venezuelan Arepa is internationally famous for its colorful fillings and historic names, Reina Pepeada, or Beauty Queen (chicken with avocado, mayonnaise and peas), Sifrina, or Upper Class Girl (Ham and cheese), Pelúa or Hairy (Shredded beef and chicken), Domino (White cheese and black beans), Llanera or Country (Grilled meat with tomato and cheese), among many others.

The versatility of the Arepa underlies the fact that it is a dish with no time to eat: it can be breakfast, lunch or dinner, and is the favorite of Venezuelans after a party night and it is never missing at the end of a wedding or graduation.

Mauricio Izquierdo
Venezuelan from Caracas above all. My professional studies have been focused in the Audiovisual Production and Integral Journalism, trying to combine images and sounds with a strong impact and coherent message. My social sensibility has allowed me to be in touch with diverse cultures and social levels, also my personal and academic experience in cities like Caracas, Buenos Aires, New York and Philadelphia has given me perspective on cultural and artistic expressions and how they can be a social reflection of it's people, also how culture can communicate and transcend borders and languages. Here's a bit on how I see Latin American culture and art for the world.
Loading...
Comment
0