How fast can a country deteriorate? How promptly can it lose its culture, its soul? 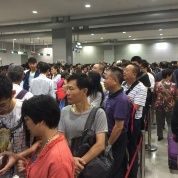 Japan was my home for many years. I was running there from countless war zones, to get some rest, to enjoy beautiful nature and its ancient, deep culture.

I learned all about its legends and fairytales, I knew its creeks and peaks, villages lost in time.

I came here to think and to write, on board those marvelous high-speed trains, Shinkansens.

But in just a few years, things have gone to the dogs: first slowly, gradually, and then more and more rapidly.

Several “care-free” generations, obsessed with pleasure, entertainment, individualism –  generations fully influenced by the West – have finally broken the Japanese spirit, turning it into a bizarre hybrid.

The surface still remains intact, but there is hardly any depth underneath: A train conductor bows humbly to the passengers when leaving the car, but an old lady with heavy shopping bags will not get her seat from an aggressive-looking high school girl, yelling “kuso” (shit!) after every second word.

Japan of the right wing Prime Minister Shinzo Abe is bellicose, racist, discriminative but also confused and full of complexes.

It is suddenly not such a great place to be, particularly if you are looking for harmony and social justice.

Only recently, Japan had the most equal distribution of wealth on earth, much better than Europe or Australia. It was easy to spot an MP eating in the same ramen noodle shop as a cleaning lady, if the ramen was good.

There are tens of thousand of homeless people in all major cities – something unthinkable in mainland China or Vietnam.

Of course, Abe’s so-called “nationalism” has nothing to do with the aristocratic patriotism of people like Yukio Mishima (one of the greatest modern writers, who publicly committed hara-kiri as a protest against the shameful Japanese collaboration with the United States).

The nationalism of Abe is nothing less than collaboration: a betrayal of both his own nation and his own continent – Asia.

Japan is now firmly on the side of oppressors.

It is openly antagonistic to both Russia and China, and it is tightening cooperation with all right wing, oppressive regimes in Asia, from Indonesia to the Philippines and Thailand.

A legendary Australian historian, Geoffrey Gunn, told me recently in Nagasaki: “Well, the fact of the matter is that China is indignant at its encirclement. China is indignant that Washington backs Japan, that Washington is ready to support Japan’s non-negotiation policy over the Senkaku/Diaoyu Islands. So we see, in this situation, a clearly indignant China, and Japan that is taking a basically aggressive position in relation to so-called territorial integrity. So Pacific Asia is increasingly becoming more belligerent, more conflict-prone East Asia.”

Japan has gone mad. It has sacrificed its pride; and it has thrown its might behind the Western aggressors. In the past, its Western handlers allowed it to get rich through the blood spilled by Korean, Vietnamese, Laotian and Cambodian people –  during the U.S. beastly invasions and carpet-bombing campaigns. Japan supported all of these genocides, and it was making huge amount of money.

All this selling itself to the Westerners did not pay off.

And so comes hate! So came wounded pride.

“Most Japanese people now feel antagonistic towards both Chinese and Korean people,” my film editor in Osaka told me.

Instead of changing course, Japan is plunging deeper and deeper, in fact all the way, into unsavory annals of collaboration.

It discriminates. It treats foreigners like shit. It does not even pretend to be polite, anymore.

Come to Abe’s Japan! Land at Kansai Airport and if you are a foreigner, you will be humiliated. Yesterday, I stood 63 minutes in line and observed how some deranged senior citizens armed with bit of power were yelling and bossing shocked passengers. From landing to collecting my luggage it took a full 90 minutes. Including time to be fingerprinted and photographed. It used to take 20 minutes before bloody Abe.

Today I went to Travelex, to pick up some cash sent to me by a magazine in Moscow. Again, humiliation, tons of papers, refusal, by some rude, little aggressive individual called Maki Sekiguchi ... I wrote to Russia and received a prompt reply from the Chief Editor: “I have the impression that they have some secret instruction in place to make all transfers from Russia to be as painful as they could possibly be, authors are complaining about that.”

Instead of turning its back on the West, Japan is now subverting young Asian intellectuals, through grants it is giving, and through the brainwashing it calls “education”.

Japan does not have any independent media. I worked for their newspapers, and I know, precisely, that everything that is printed has to be approved. Quality of the Japanese media outlets is disgusting.

As one of the leading mainstream Western journalists based in Tokyo recently confirmed: “The NHK or any other Japanese channel would never dare to air any idea that was not previously broadcasted by the CNN, BBC or FOX TV.”

But Japan “educates” tens of thousands of Southeast Asians, and “communications” is one of the most popular subjects.

“Japan does not have its own foreign policy”, David McNeill, Professor at prestigious Sofia University in Tokyo, told me.

But it feels fit to educate Southeast Asian students in such fields as political science! One wonders, what exactly would those students learn? How to collaborate, how to bend forward, and how to kiss backsides of the West?

It is all truly shameful, pathetic end of Japan’s “glory”.

Ruling elites and their nationalism ... Not Japanese nationalism, but Western!

But could any country survive, stand for decades on such disgraceful foundations!