A few weeks ago I announced a new project, a partnership with Tom Morello (Rage Against the Machine/The Nightwatchman) called Firebrand Records, an artist-friendly record label for revolutionary musicians of all stripes, from all corners of the globe. Since Firebrand recently took center stage for me, I thought we deserved at least a brief history of the project that preceded it that could shine light on some the methodology we experimented with and our positions within the music-world. There is much to learn from the trials and errors of the Riot-Folk Collective. 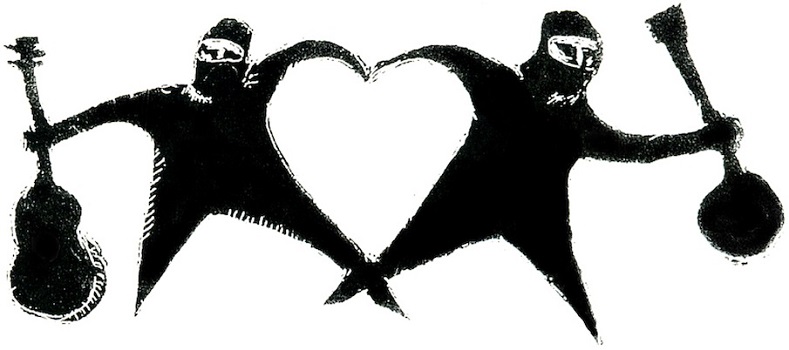 Born from the “anti-globalization” movement, Riot-Folk created, and for almost a decade experimented with, an alternative model of organization for radical musicians. The collective was born in 2004 after I put out a call to a large group of political folk musicians I had met at protests, conferences, and in my travels. These musicians were activist-artists like me, singing and writing about situations they were often part of or about topics they were deeply attached to. I wanted to organize a group of such musicians, based on the principles of mutual-aid, to popularize our songs as a means of helping influence political ideas and opinions.

Soon, this group had whittled itself down to eight of us, and we became the Riot-Folk Collective. Myself, Mark Gunnery, Brenna Sahatjian, Adhamh Roland, Evan Greer, Kate Boverman, Tom Frampton, and Ethan Miller (Shannon Murray joined two years later, bringing our number to nine) set out to "make folk a threat again."

Bad 60's references and tired cliche comparisons flourished around us as we tried to define our own type of folk music, linked to its own complicated history but also linked to our present. More Viglietti than Dylan, we saw our songs as essential parts of our fight against injustice. We could give a shit about how many albums we sold or if anyone wanted to interview us (though we did have a few nice interviews such as the one with our friend Jen Angel). Such things just weren't really part of our world.

Together, we rode the political and emotional roller coaster of the Bush years, and all of us were part of the political movements and radical cultural practices that accompanied them; the anti-war movement, the Palestine solidarity movement, queer liberation, the world of herbal medicine and healing, prison abolition and prisoner solidarity, anarcha-feminism, labor organizing, the environmental and eco-defense movement, and so much more.

From these places, and many others, we wrote and recorded, trying to reflect the way we and our friends understood the world around us.

Inspired by our model, we saw other folk-punk collectives arise from Salt Lake City to Long Island, and we emailed with similar artists in Indonesia and South Africa. Still, our relevance was greatest in the U.S. and Europe, specifically amongst people in the anarchist, socialist, and otherwise radical punk scenes and activist networks.

For most people, Riot-Folk existed in basement shows, burned mix-CDs and random computer playlists. Sometimes we would find that our music was streaming on a Russian web-radio station or being played in a squat in Argentina. We had little control over the mechanisms of distribution, and we felt fine about it.

In the music world, everything was changing rapidly; CD’s were on the way out and MP3s were in. Streaming was still really slow and vinyl was just too expensive for us. So we just put all of our music online for free, at a time when that was fairly unheard of. Our webhosts, the activist collective Riseup.net, had to really struggle to keep up with the bandwidth we needed. We were their most memory-demanding project.

Though Ethan was the real economist of the collective, having written a great zine on solidarity economics and helping us think about the money in real ways, our stance from day one was "anti-profit." So as individuals we hustled hard, working jobs and quitting them or taking breaks to tour, and often relying on a small number of hundred-dollar liberal arts college shows to fund our travels. We defined profit pretty much as any amount of money, which in hindsight was economically false.

Touring was a major part of all of our musical lives, though often our trips were limited to a few weeks here and there, scattered throughout the years. Though tours usually involve more peanut-butter sandwiches in the back of a hot car, they are peppered with memorable moments, like the time that Kate, Adhamh, Brenna, and Mark were kicked out of their own performance at the Oregon Country Fair for desecrating an American flag hanging on the stage, which apparently belonged to the Grateful Dead’s cook. Or when Tom performed at an underground punk venue Changsha, China. Or when Evan, Mark, and myself somehow performed *after* Oi PollOi at the G8 protests in Scotland.

A few times we got together as an entire group and performed, recorded, and held long meetings about our collective. These meetings went through large and small debates about our structure, our relationship with money and culture, how we sold music, and what, if anything, we should try to do as a group.

Out of the recording sessions we released an album called Rise Like Lions, which I have re-uploaded and arranged for this article.

These tours and gatherings were always self-organized and relied on an underground network of activists, punks, and folk music fans that let us stay in their homes, and who organized shows for us and promoted them to their friends and communities. Rarely did we play at any official venues, and even more rarely (if ever) did we pay for a hotel room.

When we made CDs, they were usually self-produced, burned at home and marked with a sharpie and wrapped in photocopied paper. The sheer nature of these packages showed that we were not trying to create products for consumption. Our CDs were a reflection and a living example of our political ideals.

As the first decade of the 21st century ended, we gradually stopped our collective activity. Some of us had kids, started political organizations, dedicated ourselves more fully to farming or becoming a nurse or a carpenter, or a radical lawyer – but we are all doing good! And rest assured we are all doing, as we always have, things centered around making the world a less fucked up place to live in.

A number of us have continued touring as solo artists, under the same names and doing really the same things. Some of us collaborated with other artists, while others started projects outside of the folk-genre or dedicated themselves more fully to their non-musical activism.

Though we reached our goal of impacting that community with informed, involved acoustic music, we never reached our economic goal: being a source for funding of radical projects and organizations. But we did help define a method of how musician-activist can band together and mutually-support each other.

Some time last year, our web domain expired and was apparently bought up by a Japanese dating service. I don't know who in Japan is going to www.riotfolk.org to find a date, but good luck to you!

Ryan Harvey
Ryan Harvey is a musician, writer, and activist from Baltimore, MD. Since co-founding the Riot-Folk Collective in 2004, he has shared his songs and stories of social movements in over twenty countries in North America, Europe, and Africa. His writings have been featured in The Nation, Truth-Out, and other digital publications.
Loading...
Comment
0