Some 150 people have been reported missing after a vessel sunk in lake Kivu in northeastern Democratic Republic of Congo (DRC), President Felix Tshisekedi stated Tuesday. 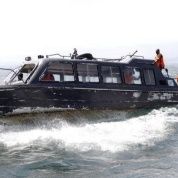 "I am very sad about the sinking of a canoe on April 15 on Lake Kivu, the provisional missing is 150," Tshisekedi posted on his office's Twitter account, also adding that there will be consequences for those who are responsible for the shipwreck.

Vice governor of Tshuapa province, Richard Mboyo Iluka, told Radio Top Congo that the whaleboat had indeed sunk with all of its passengers.

Meanwhile, President Tshisekedi confirmed that three bodies had been recovered, 33 others were rescued but 150 passengers remain missing.

"I express my sincere compassion to the affected families, I follow the situation closely to identify and punish the perpetrator," Tshisekedi stated.

Local activist Delphin Mbirimbi also told Reuters that the boat, which had departed from neighboring North Kivu province, met its demise on the lake near Kalehe territory.

Deadly boat accidents are frequent in the Democratic Republic of Congo, where boats are frequently overloaded beyond capacity. In 2011, then-President Joseph Kabila fired the country’s transport minister after a series of boat accidents resulted in the deaths of over 100 people.

In 2015, a two-boat collision on the Congo River left more than 100 people missing, the World Health Organization reported at the time.