​The Vietnam war claimed the lives of millions of Vietnamese as a result of the United States aggression against the country. 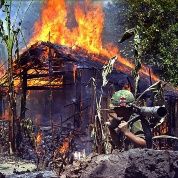 The war lasted from 1955 to 1975 and in Vietnam it’s known as the “War Against the Americans to Save the Nation.”

The United States, having at its disposal the most advanced technological and chemical weapons at the time, committed horrific atrocities that continue to affect Vietnam and its people to the present day. ​