In Central America, women have been working in garment factories for years, making the clothes that warm and clothe people around the world, particularly the West. However, these workers have also faced extreme violence and human rights abuses within their jobs and their societies, in countries that had been undergoing civil wars and internal conflicts for decades. 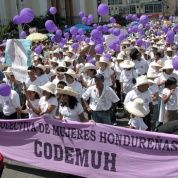 Over the years, unions and other forms of organization have sprung up to help women in their fight for dignity and equality within the workplace in typically dangerous societies such as Guatemala, Honduras and El Salvador. Many women are leading the front lines in this fight for gender equality, challenging the state, corporate businesses and societal norms.

In recent years, tens of thousands of single mothers and children fled Central America and tried to enter the United States, looking for opportunities and a better quality of life. The vast majority of these migrants and refugees were from Guatemala, El Salvador and Honduras —  also referred to as the Northern Triangle — fleeing situations of violence and high unemployment.

According to figures from the United Nations, in 2013 Honduras was the most dangerous country in the world with 90 murders per every 100,000 people. However, it should be noted that violence in the country spiked after a U.S.-backed coup in 2009 toppled the democratically-elected government of former President Manuel Zelaya. Since then the country has been ruled by right-wing presidents who have sought to remilitarize society, while criminalizing social movements.

Neighboring El Salvador and Guatemala were the fourth and fifth most violent nations in the world for the same year. But like Honduras, the structural violence that afflicts these countries can be partly attributed to U.S. interventionism, as well as economic neocolonialism by way of free trade and development schemes pushed by international financial institutions such as the World Bank and International Monetary Fund.

For example, one recent cause of the region’s precarious and exploitative labor situation has been the implementation of the Central American Free Trade Agreement with the United States, also known as CAFTA, which makes it easier for foreign companies to establish in Central America exactly where labor and production costs are cheaper, and where there is a lack of oversight and enforcement of labor laws.

In an attempt to address the problem of violence in the region that is pushing people out of their home countries, President Barack Obama, along with leaders of El Salvador, Honduras and Guatemala, developed the Alliance for Prosperity Plan for “systemic change” in the region. The plan’s aim is to increase prosperity in the three countries by spending more on infrastructure to facilitate foreign investment, develop more corporate tax breaks, and create more free trade zones.

However, this focus on combating violence by building corporate prosperity is akin to throwing gasoline on a fire in order to put it out: Obama’s neoliberal policy push coupled with the militarization of these countries in order to allegedly fight drug war violence, which is deemed a barrier to increased corporate investment, will likely exacerbate the political and economic violence which displaces many Central Americans.

According to the group, garment manufacturers in places like Central America fear that if they raise workers’ wages, or if production drops, this will increase the price of the product and foreign retailers will simply go someplace with cheaper workers who can offer cheaper prices. If textile companies raise wages or enforce its workers’ rights, which could lead to lower production, they risk “pricing itself out of the market.”

Salvadoran law, for example, obliges companies to offer their employees a contract and provide labor security. However, Estela Ramirez, secretary-general of the women-led textile union Sitrasacosi in El Salvador, told teleSUR that “not one company in the garment sector has complied with this law in our country … there have been attempts and fights by garment workers (to change this), but up until now, nothing has changed.”

In these three countries, women have for years been working under oppressive conditions, particularly in the region’s textile industry, otherwise known as maquiladoras. Some of the more typical problems they encounter are: working long hours; pressured to meet large quotas; being paid well below minimum wage; having no access to health care or other social services; and facing discrimination because of their gender, often having to prove that they are single and not pregnant to eliminate the possibility of maternity leave.

Over the years, unions and other forms of labor organizing have tried to tackle this discrimination and empower women in the work place. Several of these movements have been led by strong women.

“We must strive to create conditions for women to be organized,” said Ramirez. “That's important, because without organization we can not achieve the women’s demands. And without being organized, we will not have strength.” 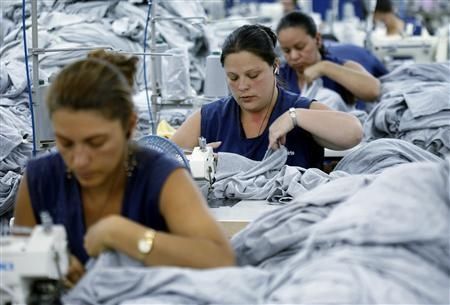 Ramirez and other labor leaders pointed out that many women who work in maquiladoras do want change in their workplace, but are often completely unaware of their rights. These include: signing labor contracts for increased job security, limiting working days to eight hours, earning at least a minimum wage, having proper work breaks and time off, having access to social services, and having autonomy over their own bodies and not being exposed to employer enforced pregnancy tests.

In Honduras for example, women in textile factories are often forced to work days longer than 11 hours, and are expected to produce up to 600 clothing items a day, causing serious health problems, according to Maria Luisa Regalado, general coordinator of Codemuh, a women’s rights group in Honduras fighting for better living and working conditions for women in the textile industry

Rosa Escobar, executive director of AMES, an autonomous women's organization in Guatemala, told teleSUR that the majority of women who she encounters lack any knowledge of their rights as citizens or as workers.

“The training we give them is for them to get to know themselves first, as women, as citizens, and their rights as human rights,” she said.

This is not an easy task in countries where generally women’s rights and gender equality have not been a top priority, and men have been the sole authoritative voice. This has led to many roadblocks in trying to get women to demand their rights and organize against oppressive working conditions.

“(Women are) hard to organize because they are women who have been typically suppressed,” said Ramirez, who has also been a seamstress for over 20 years. “Not just because of their situation at home but they’re also suppressed at work, at school, in their families, in the church – they all contribute to maintaining suppression in society. For example, women are always prohibited from talking.”

In her experience trying to organize women textile workers in El Salvador, Ramirez said she must approach the women carefully, and develop a trusting relationship with them before she can introduce the concept of workers rights and personal autonomy. This is partly because of the patriarchal nature of society and the prevalence of machismo.

“We must strive to create conditions for women to be organized … because without organization we can not achieve the women’s demands. And without being organized, we will not have strength.”

In all three countries, unions in and of themselves face a high level of violence, where often members and organizers have received death threats or have been assassinated -- specifically for their involvement in a union. Often the best case scenario is that they are fired from their jobs, though for many women they depend on these jobs for their survival. This is the violence of transnational capitalism carried out by foreign companies that view labor rights and unions as threats to their profits.

In Guatemala, Escobar works with women to educate them about sexual and reproductive rights. She also helps them demand access to social services from their employers to address these gender-specific health needs. One example is the common occurrence of vaginal infections caused by sitting in the same position on uncomfortable surfaces for extended periods of time with no breaks, which could be up to 12 hours a day, she said.

“These are women who do not have knowledge about their bodies in a holistic manner,” said Escobar, saying these women need to “demand that the company provide social security.”

According to union leaders in all three countries, the profile for women who work in maquiladoras is the same across the board. They are single women, or single mothers who are the sole breadwinners of the family, women with little education, and are between the ages of 18 to 25 (35 in the case of Guatemala). However, according to Ramirez, many companies in El Salvador continue to illegally employ minors.

In most cases, women often do not have the luxury of looking for other jobs. In places like El Salvador, forced prostitution and human trafficking is a major issue, so maquiladoras are often seen as the safest option to earn a living for women who have had no formal training or access to education, according to Ramirez. In Guatemala, working in agriculture or in the informal economy are the two most common alternatives to maquiladora work for women, however they are seen as being even more physically exhausting and less stable.

However, for many women this is starting to change. Luisa Regalado said women in Honduras are fighting back by getting involved and organizing themselves.

“They do it to fight for respect and to expand their rights relating to their gender and labor conditions, and their right to exercise their political participation in private and public spaces that helps them gain autonomy,” Luisa Regalo told teleSUR.

Other leaders in the labor movement try to remain optimistic. Fighting for women's rights has led to some positive policy developments in the three countries. In Honduras, illnesses or injuries that arose at work are now eligible for social security benefits, with the Supreme Court actually holding companies responsible. In two separate worker injury cases, the court ruled in favor of the workers.

In Guatemala, the level of physical violence against women has decreased in textile factories, which is considered a major advancement for worker's rights. But the fight goes on.

"It is important that women demand now,” said Ramirez. “We have to go through the motions, the process is long and very slow … but if we never begin to do things, we will never advance. We must keep going.”