Venezuela’s electoral authority has suspended the referendum to recall President Nicolas Maduro, citing an order from the country's Supreme Court regarding allegations of fraud on the part of the right-wing opposition during the initial signature drive. 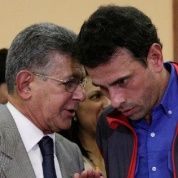 The National Electoral Council, known by the Spanish acronym CNE, specified that the lengthy recall process cannot continue and the next phase in the referendum process — the collection of 4 million signatures to trigger the vote—is canceled.

Several states have now annulled the results of the first phase after the opposition submitted a large quantity of invalid signatures.

Of the 1,957,779 signatures submitted during the first phase, over thirty percent—or 605,727—had irregularities, including signatures from over 10,000 deceased persons.

The submission of false signatures is a major offense and allowing the recall to proceed under those circumstances would have undermined the credibility of the entire Venezuelan electoral system.

The country's right-wing opposition responded to the suspension of the recall referendum process with indirect calls for a military coup.

However, government officials warned as early as June that the massive amount of irregularities could spell doom for the recall process.

“It is very serious that these right-wing politicians have again submitted to the electoral authority a package with 600,000 fake, fraudulent, signatures. The proponents of the referendum said they conducted an audit and declared that all the signatures presented were spotless,” said President Maduro in June.

Nonetheless, the opposition is crying foul and has called for street protests, claiming the constitution has been violated.

In a press conference Friday, the opposition announced that a delegation from the assembly will travel to the Organization of American States, or OAS, to denounce the suspension of the referendum and demand the OAS apply the Democratic Charter against his country.

The opposition is striving to portray themselves as helpless victims who have been thwarted by the socialist government.

However, the opposition's narrative is at odds with the facts on the ground.

The opposition was well aware that there would be intense scrutiny at every stage of the recall referendum.

The MUD, as the opposition is known, submitted its initial petition for the recall referendum on May 2, many months after they took their seats in the National Assembly after winning parliamentary elections in December 2015.

That delay is now widely attributed to the arrogance of the right-wing leadership of the National Assembly, who overplayed their hand thinking that their parliamentary victory meant they were now the dominant political force.

In January, the opposition boasted that they would oust Maduro within six months and tried several, ultimately unconstitutional, efforts to achieve that aim, such as trying to retroactively shorten Maduro's term.

Henry Ramos Allup, head of the National Assembly, himself admitted in an interview in February with Colombia's El Tiempo newspaper that the constitution sets a high bar to hold a recall.

“(The recall) itself is cumbersome. It is enough to just read the Constitution to see that. It is a deceptive proposal that looks very nice, but when you start to look at the details, you see it is very difficult to implement,” said Ramos Allup.

RELATED:
Venezuela's Right-Wing Assembly a Return to the Past

It was only after exhausting other efforts that the opposition finally sorted out its differences and settled on initiating a recall referendum.

That delay proved to be costly for the opposition as it meant it was all but impossible that a recall vote will occur this year.

That is significant, because under the Venezuelan constitution if Maduro is in office on the fourth anniversary of his four-year term—Jan. 10, 2017—his vice president would serve the remainder of his five-year term in office in the event that voters did recall him.

This was a fact that the opposition was perfectly aware of, since the recall they launched against the late Hugo Chavez in 2004 took approximately eight months.

Had the process been initiated by the opposition in January of 2016, it would have most likely ensured the recall vote occur in 2016.

When examining the presidential recall vote in 2004, a span of eight months took place between the opposition submitting the signatures at the end of November 2003 and the vote being held in mid-August of 2004. Chavez ultimately remained in power after the recall was rejected by a wide margin.

Knowing full well that the timelines were tight, the opposition then rushed to collect signatures during the first phase.

That hurry is believed to be partially responsible for the high number of fraudulent signatures, the very same that have now led to the suspension of the entire process.

Ultimately, the inability to meet all the requirements of the recall process is a failure that rests on the shoulders of the right-wing opposition.