With Brazil's presidential election just over two weeks away, candidates are firing up their campaigns to make their points and win votes. 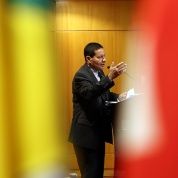 The new leading candidate, Jair Bolsonaro of the Social Liberty Party, has been hospitalized after being stabbed at a rally in Juiz de Fora, Minas Gerais. The Rio de Janeiro congressman was, by default, propelled to the lead after top-runner, former Brazilian President Luiz Inacio Lula da Silva, was forced to transfer his candidacy to Fernando Haddad last week, due to judicial decree.

Until his retirement on Feb. 28 this year, Mourao held the highest military post in Brazil. But who is this military strongman? Here is a look into his story to get a better understanding of Bolsonaro's vice-presidential running-mate.

Born to division general Antonio Hamilton Mourao and Wanda Martins, Hamilton Mourao joined the military in 1972. He attended, along with Bolsonaro, the Black Needles Military Academy in Resende, Rio de Janeiro and would become an instructor at the same academy.

Hamilton Mourao served in Angola as part of a peace mission and as Brazil's military attache in Venezuela. He was also commander of the military's Sixth Division and the Southern Military Command.

In 2017, during his final speech as general, Mourao referred to Carlos Brilhante Ustra, the former chief of the Department of Information Operations - Center for Internal Defense Operations, (DOI-Codi) Brazil's intelligence and repression division during the military dictatorship, as a "hero." According to the National Truth Commission, the DOI-Codi was responsible for 45 deaths, as well as the disappearance of political prisoners.

Also last year, Hamilton Mourao suggested that a military coup was possible in Brazil. Speaking at an event in Brasilia, he said, in reference to Lula, that either the judicial system removes from politics "those elements involved in all those illicit acts" or the army would "impose" its will. He added that "very well elaborated plans" for a military intervention had already been developed.

Bolsonaro chose Mourao as his vice presidential running mate in August. Responding to remarks the general made of a possible military takeover, Bolsonaro said, "It was just a warning. Nobody wants to seize power that way. ... Maybe we could have a military man winning in 2018, but through elections."

Earlier this week, during a speech at the Housing Union (Secovi) in Sao Paulo, Mourao referred to Africans as "dirt-bag scum" as he criticized foreign policy initiatives towards the African continent during the presidencies of Lula and Dilma Rousseff, both members of the Workers' Party (PT).

Mourao said the South American giant had adopted a "diplomacy called South-South. From that point on we were involved with all that 'dirt-bag scum', please excuse the term ... which resulted in nothing except debt incurred. We're in default because of this."

Later in the speech, he called single mother and grandmother households a "factory of maladjusted elements," in reference to youth criminality.

"Family has always been the nucleus. You end up with the social problems we are experiencing once the concept of family is severed. It mostly attacks poor areas where fathers and grandfathers are absent. The end result is an absolute factory of maladjusted elements who are inclined to seek membership in narco-gangs that infect our country."

In response, Rousseff tweeted, "According to the IBGE (Brazilian Institute of Geography and Statistics) there are 11.6 million households in Brazil maintained by women and their children, without the presence of male partners. My solidarity goes to the mothers and grandmothers who heroically raise their sons and daughters and granddaughters alone."

She went on to note that she "respects and admires" these women and that society should "denounce those who demonstrate prejudice or indifference to the true love of millions of women, mothers, and grandmothers."

The election on Oct. 7 is one of the most uncertain since Brazil returned to democracy in the 1980s, and sees a heated race between the country's left and its emerging far-right politics led by Bolsonaro and Mourao. Haddad has been coming up in opinion polls and holds the second place now with 17 to 19 percent of voter intent.

Polls suggest that the race will go to a second round choice between Haddad of the Workers' Party and Bolsonaro, in which Haddad could pull off a narrow victory, capitalizing on the massive popularity of his ally and former president Lula.