While most of the United States celebrated Thanksgiving and then went on to spend over a billion dollars on “Black Friday,” a group of indigenous people have quietly been marking the day for the last 45-years as one of mourning and calling for truth and reconciliation. As a result, annual events have been organized since 1970 in Plymouth Rock on the North-East coast, the same place where the pilgrims first landed. 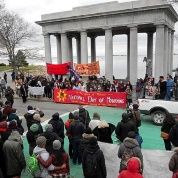 The difference could not be starker between the day of festivities and watching American football and that of an annual tradition of protest and consciousness raising. But that is precisely the kind of contrast which organizers from the United American Indians of New England (UAINE) have long been aiming to achieve with their Plymouth Rock-based events.

The Myth of Thanksgiving

Over 96 percent of U.S. citizens celebrate and recognize the holiday in the traditional manner, commemorating an oft-told and infamous meal sharing between the Pilgrims and Wampanoag people in 1621, by eating turkey. However, most of those celebrating the holiday are unaware of the manner in which the first Thanksgiving was actually declared.

“Until we tell the true history of ourselves, and start telling each other the truth, we are not going to get anywhere in this world,” Moonanum James, the event organizer and native of the Wampanoag people, the same tribe that first encountered the Pilgrims, told teleSUR.

Governor John Winthrop, of the Massachusetts Bay Colony, decided to give “thanks” for a successful four-year war that was waged to ethnically cleanse indigenous people from 1634 to 1637. According to notes from Winthrop's journal itself, the bloody affair mostly occurred in Mystic, Connecticut, and resulted in the enslavement and massacre of some 700 native Pequot men, women and children.

Captured male Pequots were traded for “cotton, tobacco and Negroes” and several hundred other remaining survivors offered themselves for enslavement in exchange for not being killed, with the first official Thanksgiving holiday declared at the war's end in 1637.

But debunking the racist myths surrounding the holiday is exactly what the organizers of UAINE want to do, and many scholars agree with this view.

“Holidays like Thanksgiving continue to perpetuate the myth of ‘The Indians welcomed us and fed us, so we have a justification for being here on stolen land,’ ” Jennifer Nez Denetdale, a University of New Mexico, said to Al Jazeera.

Mahtowin Munro, the co-leader of UAINE and a Lakota native, could not hold back a couple of chuckles when talking about the differences between the events she organized and more common ways of celebrating.

“It's pretty clear that we're not Black Friday shoppers,” she told teleSUR.

James was incredulous when he spoke of the same topic. “Look at Black Friday, for God's sake. There are people sitting there, waiting for a 95-inch big screen, beating each other up. What does that tell people about who you are?” he said.

Not long after teleSUR interviewed James, a number of arrests were made during a brawl that broke out in a Kohl's department store in Tustin, California. The brawl also resulted in several injuries, with some requiring hospitalization.

Past “Black Fridays” have seen all of the following: Target shoppers stepping over a 61-year-old man killed by their stampede in West Virginia (2011); bargain shoppers, who in their fervor, hospitalizing an 11-year old in Ohio (2013); a man stabbed over a parking space argument at a Virginia-based Walmart (2013); and a fatal stampede in Long Island, NY, which killed a Walmart worker (2008).

This year, record-breaking online sales were registered even before Black Friday. Sales rose by almost 15 percent, according to figures released by an IBM database analysis.

In Plymouth Rock, however, matters were different. While people were brawling in department stores, indigenous people in Plymouth were organizing, speaking and socializing together in what UAINE has long dubbed a National Day of Mourning.

Some five hundred people gathered from around the New England-area and many other far-flung areas from across the country to mark the day's events. Speakers spoke against what they called the “Thanksgiving myth,” demanding the release of long-time American Indian Movement leader and political prisoner Leonard Peltier and participating in a large sit-down social gathering to close the busy day of events in Plymouth. 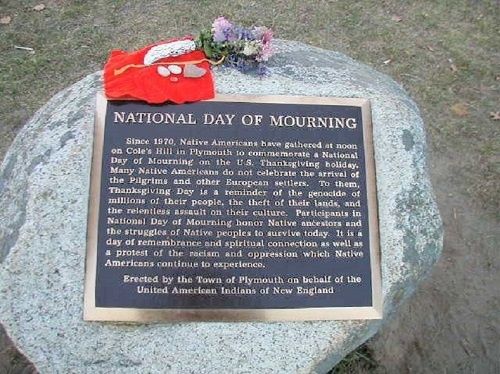 The Day of Mourning first started when James's father, Wamsutta Frank James, was censored in advance of a 1970 ceremony commemorating the 350th anniversary arrival of the pilgrims to the United States. When organizers received a draft of his statement in advance, they said a couple days later that he could not give the speech.

“The organizers said it was too inflammatory and would be out of place and offered to send a couple people down to help him write a speech. My father said sure, come on down. But it wasn't a few days into that that he said that it simply was not going to work,” the younger James said.

When word got out that the speech was censored, the elder James then got together with his indigenous comrades and said, “let's go to Plymouth,” his son explained to teleSUR. James described it as a, “a beautiful thing to do,” and a number of other native allies and the older James have continued to orgnize what has become an annual event since 1970.

And so began the annual tradition, as well as the founding of UAINE.

James' father passed away in 2001. He and others “didn't realize that we'd still there. But that was how it got started … and here we are, still doing it almost a half century later,” James proudly declared.

“Indigenous nations and its people remain under assault by the U.S. government,” said Denetdale, an academic who is also a native Navajo and expert on indigenous culture. Denetdale also said that the oppression of indigenous peoples “has not ended, [but] so too has our resistance continued.”

But matters since 1970 have not always been easy, as Munro explained to teleSUR.

“Back in 1997, after we had a speak out, we marched through the streets of Plymouth ... and the city and the state police sent in at least a hundred police to attack our demonstration,” said Muro. “They arrested 25 of us, peppered sprayed us and knocked all sorts of people down and what not.”

The conflict immediately went to the courts and the outcome solidified what James and Munro said should have been their constitutionally guaranteed free speech-rights in the first place. Munro was actually among the 25 who were detained but charges were dropped and UAINE, Munro said, “has not had a problem and everybody would happy to keep it that way.”

James carped about previous interviews about the annual event, including one on FOX where he said he was told “that my people from 500 years ago are a bunch of ignoramus.” 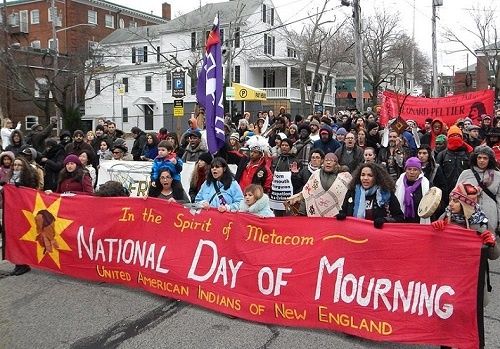 ﻿A demonstration through the streets of Plymouth, Massachussetts is organized annually by the United American Indians of New England, including last week's march, pictured here. (Photo: Liza Green)

James pointed out that he is always asked if he is anti-Thanksgiving, but both Munro and him emphasized that they were not. “I can give thanks 365 days a year that I might be able to get up and make myself a cup of coffee. Wow, that is something to be thankful for. I can afford a cup of coffee. Many people, cannot. We are anti-mythology, not anti-Thanksgiving,” he explained.

“We're not just a single-issue group, you know,” Munro further glibly remarked, while railing off a half-dozen different solidarity causes, ranging from the Ayotzinapa struggle against narco-state violence in Mexico to the anti-police brutality protests in Missouri and beyond.

“We certainly expressed our solidarity not only with the families of the normalistas, but also with the thousands of vanished people in Mexico. And we spoke about how much of that violence is due to the U.S. economic and drug policies on the National Day of Mourning,” Munro said.

A replay of the scene between James' father and local organizers may yet still play out. 2020 will mark the 400th anniversary of the Pilgrims landing and already, official ceremonies and historical recreations are being planned. Some $350 million USD is generated in annual tourism revenues, official local parades are held every Thanksgiving and the tourism revenue growth rate has been at a steady 3 percent. As a result, local organizers are gearing up for the 2020 celebration. 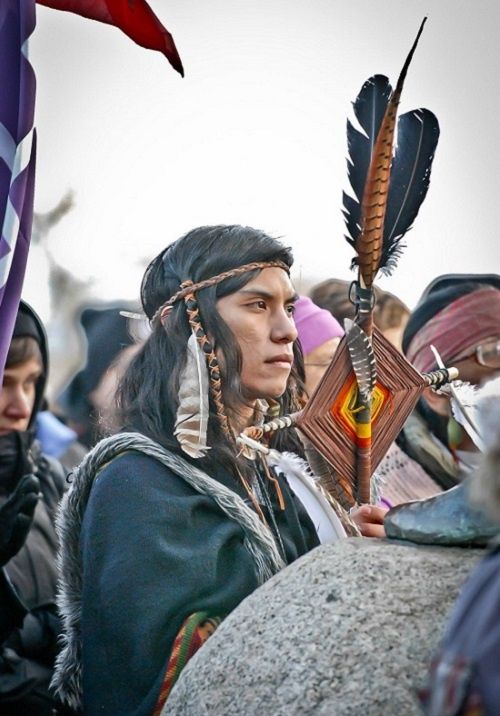 A participant in the National Day of Mourning listens to speakers during the events organized on Thanksgiving last week. (Photo: Ricardo Murillo)

Some local indigenous people have been invited and may participate, but not Munro and James.

“I haven't gotten any invitations and don't expect any,” James explained. Their interest has long been focused on debunking myths, not on propagating them for local tourism profits.