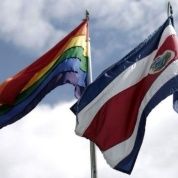 It will be anything but the typical “fiesta electoral” Costa Ricans are accustomed to. Pressing political matters like the “cementazo” corruption case, which saw members of all three branches of government implicated this year, including President Luis Guillermo Solis, have made voters of this small, army-less country, more critical, if not disillusioned, with the person entrusted with leading their country.

Last November, polls revealed that a whopping four out of 10 Costa Rican voters were undecided about which presidential candidate they preferred. The Investigation and Political Studies Center at the University of Costa Rica, UCR, undertaken between Dec. 4-13, then showed that 34 percent of voters had not picked a presidential candidate. A Jan. 9-11 study conducted by OPol for the internet news site Elmundo.cr revealed that the number of undecided voters continued to dwindle down to 28.2. percent. A total of 2,875 people were surveyed with a margin of error at 1.8 points.

However, it's the latest University of Costa Rica survey, with a margin of 3.1 points given to error, that has garnered the most surprise. It shows Fabricio Alvarado, a representative of the Evangelical National Restoration party, making significant headway. In just a month, he's ascended in the polls from a mere three percent to 17, emerging in first place.

His public appeal is being attributed to his conservative and homophobic views. Researchers dub it a “religious shock” in a predominantly Roman Catholic country, where devotees and voters oppose the Inter American Court of Human Rights' recent decision to legalize same-sex marriage.

“These are people who are not happy with the way the Inter-American Court has violated our sovereignty,” said Alvarado, adding that he's the candidate “most vehemently opposed to that position, therefore, the people identify with us.”

Alvarado's sudden rise has been substantiated by other surveys, including OPol Consultores, Demoscopia, and CID-Gallup.

Trailing at a close second was former Security and Justice Minister Juan Diego Castro, a member of the National Integration Party, PIN. He's renowned for his promise to stamp out corruption and crime in the Central American country.

While Costa Rica's Supreme Electoral Tribunal has urged electors to cast a “well-informed vote,” second-guessing fake news to deliberate wholesomely on the issues at hand, Diego Castro lashed out at the tabloid newspaper La Nacion, describing it as being “diabolic.” He said that if he's elected president the paper “will not last a year of my government, that printed newspaper will stop circulating” not as a result of being closed by his government, but having been “so poisonous that they will end up poisoning themselves,” according to Q Costa Rica.

Still, roughly 27 percent of voters remained undecided in the survey conducted by the university's Investigation and Political Studies Center. Also, all 13 presidential hopefuls didn't even come close to the 40 percent minimum required to win the election in the first round of voting. Alberto Cortes, a political scientist from the University of Costa Rica, said the surveys reflect “an electoral behavior pattern with a high degree of volatility.”

Pressing social and political issues await the newly elected president, including the need to create more jobs, improve public health, reduce crime and boost the economy. Two vice-presidents and 57 new Legislative Assembly members will also be determined during next year's general election, according to The Tico Times.

While a second round is likely needed to determine who wins the election, the percentage of undecided voters may very well alter the panorama, as it did in 2014, days before the election takes place.

Though recognized by Western countries as a democracy, Costa Rican law forbids its president from using her or his position to influence elections, requiring the head of state to renounce the party that secured their seat in the government. Hence, an electoral blackout is imposed on the executive branch, as well as all public institutions to prevent the party in power from self-promotion. Only urgent, public service news transmissions are allowed, according to The Tico Times.

Legislators, on the other hand, are permitted to rally behind their preferred candidates, bearing that public funds are not used to do so.