Papal visits to Latin America are usually celebrated by faithful, enthusiastic Catholics: the pope is the head of the Catholic Church, the most popular religion in the region. Crowds welcome him in public squares in emotional meetings and masses. People wait for hours for a chance to see the pontiff close up or even shake his hand. Posters and key-holders with his pictures and quotes are sold everywhere. But Chile might be a different case. 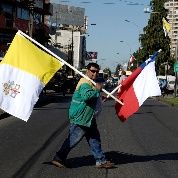 Pope Francis is coming to Chile on Monday for a three-day visit. At first sight, his program seems ordinary: he will conduct massive public masses and meet with all sorts of people, including high-level politicians, a Mapuche community and victims of Pinochet's dictatorship. However, protests have already been sparked and will likely increase as the visit gets underway.

The pope's presence in Chile already faces challenges regarding sexual abuse by members of the Catholic Church, the Mapuche struggle for land and respect, and the large amount of money the government will spend on security, even though Catholics are expected to welcome him with open arms.

Considering how people are reacting even before Pope Francis has set foot on Chilean soil, what developments can we expect during his tour?

Once of the most notorious victories of the Spanish and Portuguese conquests of what we now know as Latin America is the implementation of Catholicism through its mixing with Indigenous local belief systems. Since then, the sub-continent has remained highly Catholic, except maybe for Chile.

This South American country has the highest atheists/agnostic rate in Latin America, with 38 percent of its population declaring themselves devoid of any religious beliefs, according to a poll by Latinobarometro in 2017. Just 45 percent of Chile's population identify as Catholic. In this Vatican-dominated region, only Uruguay is less religious than Chile, with just 31 percent of the population describing themselves as atheist or agnostic.

Has Chile always been like this? Well, not really. In 1995, 74 percent of its population called themselves Catholic, with eight percent declaring themselves atheist/agnostic. What has caused this change in Chilean spiritual beliefs?

The causes are many. The decline in Catholicism is related to the increase in evangelical Christian movements, but that represents just a fraction of the numbers. Besides, that doesn't explain the rise of agnosticism. According to Latinobarometro, one factor that explains a lot is the Karadima case.

Reverend Fernando Karadima was the head of the El Bosque parish in Santiago de Chile. There, he preached to Santiago's right-wing and upper-class society. In other words, he was Santiago's elite priest. In 2011 the Vatican found him guilty of sexual abuse crimes he had committed since the 1980s, condemning him to a life of prayer and confinement. Even though the case drew much attention in Chilean society and multiple people testified against him, a court declared him innocent the same year.

According to the organization BishopAccountability.org, the Chilean government allows Catholic Church leaders to act with "impunity" and the church even openly reinstates "priests who have have multiple allegations of abuse." Karadime might have been saved by his connections with Chilean high society and politicians, but the Vatican still found him guilty. Barro's case, on the other hand, is a little different.

Juan Barros Madrid was a long-time student of Karadime, who acted as his spiritual guide. Some of the victims who testified against Karadime also pointed at Barros for witnessing the sexual abuse crimes and subsequently covering them up. In 2015, Pope Francis named Barros as Bishop of Osorno, a southern town in Chile.

Pope Francis' decision regarding Barros was seen as a continuation of the Catholic Church's policy of covering up sexual offenders and ignoring claims by their victims, the number of which is overwhelming.

In a confidential letter written by the Pope and published on Friday, Francis claims that he planned to suspend Barros and two other bishops for a year before allowing them to assume any other position within the Catholic Church. He says his plans were frustrated when they were revealed by the Vatican's representative in Chile, but he also said the allegations against Barros are "unfounded."

All this may have cause a dramatic loss of confidence among Chileans towards the Catholic Church. With just 5.3 out of 10 points, Chile has the lowest approval rate of the church in Latin America. Even within the Catholic community, only 42 percent have a positive opinion of Pope Francis.

How Chile is Reacting

Numerous organizations have expressed concern about the pope's lack of interest in meeting victims of sexual abuse. Jesuit Priest Felipe Berrios has said the pontiff should make an effort to meet them, as has been requested. He's also demanding an explanation for the pope's 2015 comments saying the people of Osorno "suffer because they're dumb" for protesting Barros' appointment as bishop.

The Vatican spokesman said in a recent interview that a meeting between Pope Francis and the sexual abuse victims in Osorno, although not planned, wasn't impossible. However, Francis' tight schedule published in November seems to leave little space for any such meeting.

Given all this, the protests that have broken out across Chile start to make sense. On Friday, four Catholic churches in Santiago were attacked with bombs and molotov cocktails. No one was injured, but three of the churches' facades were heavily damaged.

The attacks happened at about 3am and the perpetrators, who remain at large, left notes at the scenes: "Liberty to all political prisoners in the world. Free Wallmapu (Mapuche territory). Autonomy and resistance. Pope Francis, the next bombs will be in your robe."

Some media have claimed the people responsible were members of the Mapuche commuity, but such assumptions are dangerous, given the discriminatory comments and opinions they can ignite against an already brow-beaten community.

On the subject of the Mapuche, Pope Francis is due to fly into Maquehue military airport to offer a mass for "the Progress of the Peoples" in the Araucania region of Temuco, in which 300 priests, 20 seminarians, a 122-musician chorus and a commission of 23 Mapuches will take part.

Bishop of Temuco Hector Vargas has said that the pope's visit will address three main issues, including raising awareness of Indigenous communities among the public and government; addressing the Mapuche conflict in which hundreds have been persecuted, tortured and killed; and highlighting the country's most impoverished region, the Araucania.

Temuco is at the heart of the Mapuche conflict, home to the largest population of this Indigenous group. Even though Mapuche leaders have stated they aren't against Pope Francis' visit in principle, Mapuche communities from Maqueuhe and Padre Las Casas have cautioned that the pontiff's presence may actually distract attention from issues such as demands for land restitution and sustainable development projects.

Aucan Huilcaman, a well-known Mapuche leader, said: "The Pope is likely to ask for forgiveness, but we don't want him to repeat John Paul II's request, nor [President] Michelle Bachelet's usless request, but one aimed to compensate the victims of the Mapuche territories occupation."

RELATED:
In Pictures: The Faithful of Chile and Peru Get Ready for the Pope's Arrival

On a separate but related note, the perpetrators of the recent church attacks had something else to say in their notes: "10,000 million to the Pope, and the poor die in the communities." The pope's visit will cost the Chilean state 7,000 million Chilean pesos (about US$11.6million) in security and the transportation of 4,000 state officers, since the event is considered an official state visit.

Initially, a total of 8,800 million pesos ($14.6million) was requested by the government, but the amount was ultimately deemed excessive. Besides the amount the Chilean government will spend, the Vatican will also contribute 4,000 million Chilean pesos ($6.6million).

Numerous parties have expressed their concern regarding such expense. The Atheist Society of Chile agreed it was "excessive," especially considering "the context of a country with much more urgent economic necessities than the Catholic evangelization of society, as it should be an investment of that particular church and not the state's."

The organization also criticized the decision to declare the pope's arrival date as a day off, arguing that Chile, a secular state, already had one too many religious holidays. While the group denied being against the visit of any religious leader, it said it would prefer to promote a respectful society.

On Friday, Andha Chile, a group of housing-debt activists, occupied the apostolic nunciature residence, in the Providencia commune, where the pope is due to stay. "Faith is not the problem, but the millions they spend," posted the group's leader, Roxana Miranda, on Twitter.

In a scenario such as this, one can expect the papal visit to be slightly more complicated than elsewhere in Latin America, but Pope Francis is known for his progressive views. The Chilean people may yet get a pleasant surprise, but they are definitely not waiting in supplication.