Andy Warhol was one of the most influential U.S. artists of the 20th century and important figures of Pop Art in the 1960s. While the rise of this movement has its bases a decade earlier in the United Kingdom, it developed more influence and success in the United States, with Warhol being its most commercial benchmark that rapidly globalized the trend around the world, reaching Latin America as well. 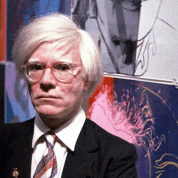 The popular art movement (Pop Art) in the U.S. emerged in the context of the Cold War, a time also marked by the rise of a new society inspired by consumerism and mass media, especially television, that stimulated new individual and collective behaviors. In the face of this, the movement was nothing more than a reflection of the zeitgeist of a decade inspired by everyday life and consumer culture.

"The themes, forms, and means of Pop Art are only a reflection of the essential features of the sixties. These include, as an example, the cult of Hollywood stars, (where the viewer becomes an anonymous and insignificant being), money (representing that everything has a price, universal remedy against frustrations), nationalism, consumerism in general: Soda bottles, cigarette packets or bubble gum wrappers are some of the objects often represented,” according to journalist Cintia Bourlot.

In that context, Warhol worked on the concept of Pop Art as a new form of artistic expression with a focus on mass-produced commercial goods. He started painting "iconic products" of all kinds, from the 32 Campbell’s Soup Cans paintings, Coca-Cola bottles to portraits of celebrities like Elizabeth Taylor, Marilyn Monroe, Elvis Presley, Mick Jagger, among others.

These small canvas works of everyday consumer products created a major stir in the art world, bringing both Warhol and Pop Art into the national and international spotlight quickly.

The artist captured through his art a critique of mass culture that bombarded by the mass media was fascinated by unlimited consumption. For him, everything becomes a consumer product at this time, even politicians or celebrities.

The portraits were not just the register of individuals but were part of a cultural taste, the social imaginaries, the constant representation in the media and the political values of the time, ergo his representations of Richard Nixon and Mao Zedong.

His art reflected the irony about what Warhol observed as U.S. culture obsessed with superficiality. Images of public figures created by marketing companies to generate money but that actually said little about the people behind those invented characters.

The eccentric Warhol became a somewhat symbol of the U.S. counterculture movement and also became a master in cultivating his own celebrity profile by entering that world so criticized. In his book ‘The Philosophy of Andy Warhol’, he wrote that "making money is art and working is art, and good business is the best art."

While Pop Art was booming in the U.S. during the 1960s, with personalities such as Warhol, Latin America was experiencing the hegemonic presence of the U.S., which through political and economic strategies, had started the expansion of its influence in the region. This scenario marked a different path for Pop Art.

In the mid-1960s, American imperialist intentions behind the impositions of power in Latin America were evident and threatening. Countries like Brazil, Argentina, among others, had assumed forms of authoritarian governments, the anti-imperialist struggles in the region that took shape since the Cuban Revolution of 1959 posed a risk to the imperialist order, so cultural war was carried out as well.

One of the strategies carried out by the imperialist agents to dismantle the movements was the murder of Ernesto "Che" Guevara, commander of the Cuban revolution who later ends up becoming an icon for the representation of Latin American Pop Art in works such as those of the Brazilian Claudio Tozzi, "Guevara Vivo ou Morto" (Guevara Live or Dead) or those of the Cuban Raul Martinez, the "Fénix."

Amid a complex political and social context due to the fragility of democratic regimes, dictatorships or the U.S. interference that led to long periods of repression, Pop Art contrasts with a more subversive spirit, becoming a vital instrument of political and social denunciation.

According to Brazilian journalist Melissa Mota, one of the works that reflect the Latin American feeling of the time is that of the Chilean Hugo Rivera-Scott with the collage “Pop América” in 1968.

“Pop is represented as an explosion, as an onomatopoeia, while the name of the continent is written with tilde in the E a gesture that is opposed to the appropriation of the word by the United States and that opens the debate on the identity and definition of the American,” Mota explained.

In Brazil, one of the countries that mostly housed Pop Art during this time, the assimilation of this trend was strengthened holistically in painting, cinema, music, and other expressions.

During the Brazilian dictatorship, several artists, intellectuals, journalists, musicians,  and others were persecuted, imprisoned, tortured, exiled or killed. Brazilian art itself underwent several transformations that forged the need to host new alternatives for expression.

The rebellious spirit of Brazilian artists succeeded in creating connections with the public and stirring the minds of spectators both through art and through music. One of the most relevant groups, for example, was the Tropicalia movement that inspired by the avant-garde of the time, gave rise to a new musical genre that, among other issues, stood out for its lyrics that –with a certain irony– criticized the system of censorship and the reality of a society immersed in a dictatorship.

Argentina’s art also flourished during this period, as new expressive forms that were developed in the mythical Di Tella Institute, one of the most prominent cultural and artistic spaces in the country, where Marta Minujin was one of the most outstanding references.

The importance of Minujin lies in the fact that her presence questioned the idea of Pop Art as an exclusively masculine space, the imperialist men of art, knowledge or creativity. Minujin transgressed that myth and became one of the most recognized artists in her country and used her works to question censorship during the dictatorship.

However, the authoritarianism of the de facto government of Juan Carlos Ongania put a brake on the social and cultural effervescence that involved the mass exile of intellectuals, scientists and artists, many of whom no longer returned to the country. The Di Tella Institute was closed in 1970.

In Cuba, after the triumph of the Revolution in 1959, artists are also submerged by Pop Art trends. One of the most outstanding faces was Raul Martinez, who, inspired by the historical process that the country went through, stood out for his originality with which he portrayed the main heroes of the revolution such as Jose Marti, Ernesto Guevara, Camilo Cienfuegos, and Fidel Castro.

Cuban Pop Art stood out for its creativity and innovation, being one of the greatest legacies of the 60s. According to some critics, it was precisely this revolutionary spirit that catapulted it as the "golden period" of popular art in the Caribbean country.

The influence of Pop Art in Latin America developed in multiple ways and although each one with its own conception and representation sought to build a unique seal during its trajectory, the articulation of the entire Pop Art movement is summed up in its political character and the effervescence of consolidating a Latin American identity that is opposed to the U.S. or Europe.