In February 1989, thousands of Venezuelans took the streets in a wave of protests that highlighted the right-wing misrule in the country. The protests came to be known as the Caracazo — an uprising that began in the capital Caracas — and ultimately shaped the country's future. 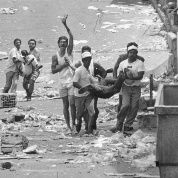 On Feb. 27, the poorest Venezuelans living in the barrios, many in the mountains surrounding Caracas filled with shanty towns, took over the streets in what began as a protest against a new hike on public transportation prices. It became a nationwide movement.

As the police began repressing the demonstrations, a growing number of people joined the protests. Events soon turned violent; the police opened fire after some of the protesters began targeting shops and supermarkets in a desperate attempt to get food.

The day became popularly known as the “Caracazo,” but violence continued throughout the following week. Official figures place the death toll at just under 300, but other estimates indicate up to 3,000 were gunned down in the wave of protest.

A Social Explosion Sparked by Neoliberalism

A hike in public transport prices may have sparked the Caracazo, but the underlying crisis had begun much earlier.

Economic decline meant that from 1977, Venezuelans' incomes began to continually fall over a 25-year period, in total falling by a third. It was only reversed after the government of late President Hugo Chavez defeated a coup in 2002, which led to a period of restored growth.

Declining oil prices in the early 1980s provoked a series of crises. With the falling prices, Venezuela began accumulating an increasingly-unbearable foreign debt.

President Jaime Lusinchi began his 1984-1989 government following an adjustment plan agreed with the International Monetary Fund. This plan led to a disastrous situation; by 1986 Venezuela's currency had devalued almost 100 percent that year alone.

The poorest people bore the brunt of the economic freefall. The situation was so critical that people in Caracas' slums would eat dog food — Perrina — to sustain themselves. Salaries deteriorated and poverty increased.

During this period, Venezuela was forced to allocate 50 percent of all its export earnings to the IMF in order to pay its debt, with the majority of people losing out.

Venezuela's old oligarchical order became so discredited that by the 1980s it began to disintegrate. Political crises broke out as various governments were elected, each promising alternatives to the free-market policies that were creating such deep suffering among the people. As each government reneged these promises, demand for a meaningful change grew.

Carlos Andres Perez was elected president in 1989 on campaign promises to oppose further economic liberalization. But within weeks as head of state, “CAP” had done an about-turn and called in the IMF for a reform package.

On Feb. 15, Perez announced a new set of measures — capitulating to IMF demands — which directly punished the population. Perez liberalized all prices except for the basic staples, increased oil prices, privatized state-owned companies, eliminated import taxes and introduced a free-market in interest rates.

It was the straw that broke the camel's back. The people could take no more, exploding with the Caracazo and becoming a mass uprising of tens of thousands of people across the country.

As waves of protest swept Venezuela, a presidential decree declared a state of emergency, suspending many basic human and civil rights. The government then sent the army to large cities to take control of the situation.

The official narrative presented the Caracazo as an anomaly, a problem that the government was able to swiftly control. The killings were justified by blaming the victims as thugs, criminals or politically-motivated troublemakers.

However, eyewitnesses to the events that day rejected this official version of events.

Henry Gamboa, a community leader who survived the Caracazo, explained in the book “Venezuela Speaks,” “The people took to the streets, and what the political police — the DISIP — did was repress social groups all over Caracas. They locked us up for 16 days in jail cells.”

Torture was also used indiscriminately. Father Matias Comuñas, a priest in the Petare neighbourhood, one of Caracas' poorest, said in the same book: “A young man was tied to a window with handcuffs by one of the Metropolitan policemen … and with a lighter the police man began setting the young man's arm on fire. The kid fainted in pain.”

It is now known that, contrary to official claims at the time, the DISIP — Venezuela's intelligence organization at the time — launched a full-scale offensive to halt the protests and the looting to quash protests and popular revolt.

The scale was breathtaking. Gidilfredo Solzano, a resident at the 23 de Enero neighborhood — one of Caracas' biggest barrios — said in “Venezuela Speaks,” “I remember that the police went up there above Apartment Block 22, and shoved the bodies in plastic bags, threw them below, picked them up with a truck and bam, that was that. And the same thing happened with the bodies on the road. They put them in plastic bags and threw them in a truck."

In later remarks, President Perez backed down from the official claims and blamed the IMF for the crisis and sidestepped responsibility for the killings.

It wasn't until 2006 that then-President Hugo Chavez publicly recognized the government's role in the massacre and provided compensation to the victims.

The Death of the Old Order

Despite the role played by the IMF, the architecture of the Venezuelan economy was an ideological project crafted by two parties: The Christian Democratic Party or Copei and Democratic Action or AD.

Both Copei and AD signed the so-called “Punto Fijo” pact in 1958, after the fall of dictator Marco Perez Jimenez, in which they, along with the Democratic Republican Union or URD, agreed to build coalition governments to preserve democracy and stability.

By co-governing throughout the modern history of Venezuela, both AD and Copei crystallized and deepened an economic model that was highly dependent on oil revenues and foreign debt. Politically, the alliance governed through authoritarianism and exclusion.

Left-wing parties were systematically excluded from the pact, including the Communist Party of Venezuela or PCV, which had led the battle against Perez Jimenez.

The Caracazo represented the end for this system. Modern Venezuelan history can be traced to this moment. Jose Vicente Rangel, a prominent journalist and later vice president under Hugo Chavez, described it as the moment "Venezuelan history split into two."

In his biography of Hugo Chavez, author Richard Gott highlights how deeply the Caracazo burrowed into various sectors of society as people rejected the government and its treatment of the people. In one telling anecdote, an ally of Chavez stopped his troops shooting at protesters asking each person where they came from, if any were from areas where there are country clubs. When people answered “no,” troops were instructed that the people protesting were their brothers and sisters from the same barrios, and they should hold fire.

As many analysts have suggested, the Caracazo was the moment that Venezuela's poor — after years of inequality and exclusion — represented a serious political force which, with the appropriate leadership, could threaten the established order.

It was against this backdrop of crisis, a questioning of state legitimacy, and with the Caracazo massacres still sharply in mind, that a popular rebellion, led by Chavez, erupted in 1992. Largely popular among Venezuela's poor, he was seen as a brave soldier fighting a corrupt, failed, decades-old system.

Social movements continued to gain prominence as the crisis continued to bite. By the mid 1990s, a culmination of the very policies the people had rejected during the Caracazo saw poverty peak at over 60 percent, with one in three Venezuelans living on less than US$2 per day.

This eventually culminated in Hugo Chavez, who came from outside the corrupt, stagnant established parties, sweeping into office in 1998 with 57 percent of the vote with a mission to transform the country.

Media Coverage of the Caracazo

A year after the Caracazo, several communication experts analyzed the media coverage on the crisis in Issue 70 of “Comunicacion” magazine. The scholars found interesting patterns in the way the media depicted the violence and death.

Using constant references to “the poor” as the key protagonists of the incidents and labeling the IMF conditions as the catalysts, some media outlets avoided blaming the government. Others pointed to the private owners of the public transport system.

Not one of the news outlets considered what happened to be a result of the political system as a whole, or as a symptom of years of failed policies that had culminated in the Caracazo.

This stands in stark contrast with today's coverage of Venezuela, where every problem seems to be blamed on socialism and the policies implemented since Chavez came to power.

Most of the media focused on presenting the riots and violence as spontaneous outbursts, which reinforced the apparent irrationality and class-oriented character of the protests.

The disappearances, killings, and other events that followed the Caracazo were largely under-reported.

Opposition then and now

Some of the current figures heading the opposition in Venezuela have ties to the traditional parties, dominant during the Caracazo — a fact often downplayed by national and international media.

Perhaps more importantly, the policies put forward by Venezuela's right wing today draw on those those that caused the Caracazo.

In 2015, key figures of the Venezuelan opposition signed and distributed a communique encouraging a coup plot that was thwarted by the government of Chavez's successor, Nicolas Maduro. A coup that, in all likelihood, would have involved a widespread crackdown on civil liberties and violence to maintain itself just as the Caracazo and the April 2002 coup d'etat did.

This so-called “National Accord for the Transition” aimed to return Venezuela's oil industry to its pre-Chavez state, when it served international oil companies rather than Venezuelans. It also called for a “review” of the state ownership of companies nationalized under the Revolution, and to remove “controls that stifle the economy,” taking the country back to its free-market past that caused so much suffering — of which the Caracazo is but one example.