​Since the ousting of President Victor Yanukovych, the new Ukrainian government has launched major transformations that are shaping the future of the country. But one year on, it appears they are not improving the living standards of the people. 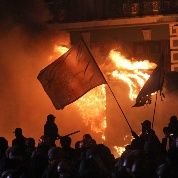 On 22 Feb. 2014, democratically elected President Victor Yanukovych fled Ukraine, after months of social unrest and demonstrations sparked by his government's decision not to join the European Union.

Just three days earlier, events had taken an unexpected turn, when police and anti-government protesters clashed and over 100 protesters were killed. The majority of the victims were gunned down by unidentified snipers that started shooting on both sides of Independence (Maidan) Square and the adjacent Instituskaya Street.

The mainstream media and the anti-government leaders blamed Yanukovych's government, which denied any responsibility.

Deal Sabotage Aided by the U.S.?

Before his ousting, President Yanukovych and government officials met with European foreign ministers and brokered a deal by which the president agreed to call for early presidential elections and the return to the 2004 Constitution, with a new coalition government to be formed within 10 days.

He also announced a third round of amnesty for all involved in violent rioting and agreed to refrain from imposing a state of emergency which could lead to further clashes.

Meanwhile, the Ukrainian Rada (parliament) banned the use of firearms by police and law enforcers, a measure that had been taken previously due to the growing violent nature of the protests, and voted to order a pull back of troops from Kiev, in absence of most of the ruling party's lawmakers.

Despite the agreement brokered by the European foreign ministers, the protesters continued and took advantage of the lack of security forces to roam the city. President Yanukovych fled shortly after, fearing for his life.

The infamous bugged phone conversation in which a senior U.S. diplomat discusses the ousting of the president, his replacement and dismisses the European point of view, saying "f*ck the EU," is believed by some analysts to indicate how powerful forces did not want a deal to succeed.

In fact, one of the most important features in the evolution of events was the role played by the United States. Both Republican Senator John McCain, U.S. Assistant Secretary of State Victoria Nuland and U.S. Ambassador to Ukraine Geoffrey Payette actively participated in the Independence Square protest in Kiev.

Furthermore, McCain himself met with opposition leaders and spoke on stage in a massive rally held at the square on December 2014, together with Oleh Tyahnybok – leader of the Neo-nazi Svoboda party – where he urged protesters to continue struggling, promising U.S. support.

That role was effectively confirmed during a televised interview in February 2015, when President Barack Obama admitted the U.S. was responsible for brokering a deal to oust Yanukovych.

“He (Putin) was caught off balance by the protests in the Maidan and Yanukovych then fleeing after we had brokered a deal to transition power in Ukraine (…)” he said in one of his responses to CNN. His remarks coincide with the content of Nuland's leaked call, which showed the U.S. was working to undermine the peace agreement reached by the EU foreign ministers.

McCain continues lobbying in favor of Kiev, urging the White House to provide the Ukrainian government with more weapons. He has also publicly spoken against the U.S. government's policy, which he considers too soft on Russia.

These dramatic events marked the rise to power of the so-called Euro Maidan, the political movement leading the protests that later became the backbone of the Ukrainian government.

Shortly after the rise to power of the Euro Maidan government, rebel forces took weapons and began to fight what they considered an illegal coup d'etat.

Many were motivated by the threats made by the new government to restrict national rights, such as language rights, of the Russian speaking population in the east of the county.

Whatever the causes, that struggle has left over 5,000 on both sides with 12,000 wounded. Almost one million people have been internally displaced and another 600,000 have fled to neighboring countries.

By March 2014, the rebels had control over the Donetsk and Luhansk provinces.

Victory in Alliance with the Far-right

Soon after the president's removal, Ukraine received a US$17 billion bailout from the International Monetary Fund, which in turn demanded Ukraine implement a sharp currency devaluation, increasing the cost of all imported goods, a government-funded bailout for domestic banks, government spending cuts and a sharp increase in energy prices.

Presidential elections were held May 25 with the rich businessman Petro Poroshenko winning the polls. Although Poroshenko did not win the majority of seats for his party, he entered an alliance with several far-right parties which had led the Euro Maidan violent protests.

The economic situation continued worsening, as Poroshenko's government began a full-scale military offensive against rebel forces in the provinces of Donetsk and Luhansk.

By the end of 2014, the Ukrainian Hryvnia had lost 40 percent of its value.

As part of the deal with the IMF, the government increased gas prices, now 280 percent higher than in 2014.

As prices continue increasing, the country's economy shrank by more than 8 percent in 2014, putting it at the brink of an economic crisis. The IMF announced it would continue its loan but demanded Kiev to cut even further government expenditures.

Despite the little success derived so far, the Economy Minister Aivaras Abromavicius has vowed to continue the current set of policies, deepening austerity, privatization and de-regulation.

Corruption, a distinctive feature of Ukrainian politics, has not improved since the rise of the new government. Once Arseniy Yatseniuk assumed power, he gave control of most ministries to insiders and veteran politicians.

Poroshenko's cabinet was built in alliance with Yatseniuk who remains Prime Minister, but it also featured a Lithuanian, a Georgian and a U.S. national, in a bid to implement the neoliberal reforms requested by the West.

Several of the oligarchs — which the Euro Maidan movement criticized — continue to be key players, and are supporting Kiev's war efforts decisively.

For example, Igor Kolomoisky, an energy tycoon and politician funds and runs the far-right Dnipro, Dnepr 1, Dnepr 2, Donbas, Aidar and Azov Batallions paramilitary groups — the so-called volunteer battalions — that are linked to the Interior Ministry but in practice receive orders from him.

The businessman was one of the biggest donors for the Arseniy Yatseniuk's People’s Front coalition, which in turn has sought to benefit Kolomoisky's businesses. Soon after the Euro Maidan movement took over, he was appointed Governor of Dnipropetrovsk Oblast province by the government, bordering the rebel-held province of Donetsk.

Furthermore, the tycoon offered in April last year US$10,000 for the capture of any Russian in Ukrainian territory and rewards for up to US$2,000 for rebel weaponry captured.

He has also help finance the Ukrainian military, spending “several million dollars” in buying car batteries for military vehicles and other supplies.

In February, 2015 Prosecutor Vitaliy Yarema resigned amid pressure from several oligarchs — including Kolomoisky which whom he had clashed — after investigating several corruption cases involving them.

“We are forced to ask for money from the very people who we are watching and are supposed to investigate,” said Yarema in an interview with Wall Street Journal before he resigned.

On the military front, the Poroshenko administration has insisted in confronting the rebel forces through continuing the armed conflict. In addition to contributing to the more than 5,000 deaths and huge humanitarian suffering, this war has led to Ukraine deepening its ties and its dependency on NATO.

The constant accusations made by Kiev of Russian involvement have helped NATO's goal of extending its presence further East, surrounding Russia.

On September 2014, the military alliance announced the creation of a rapid deployment force, destined to operate mainly in the Baltic States, claiming the move was justified by fears of a Russian invasion.

Originally set to gather 10,000 troops, in February 2015 the military bloc increased the number to 30,000, NATO's biggest mobilization since the Cold War ended.

Kiev has vowed to join the alliance and has taken all the steps necessary to enter the military bloc, but it is unlikely that NATO would approve Ukraine's entry request. Nevertheless, NATO is taking advantage of the situation to penetrate further Moscow's sphere of influence.

Whatever views are held over the ousting of former President Victor Yanukovych, one year after his toppling, Ukraine seems to be worse than before.