teleSUR English spoke with progressives on their views of the Democratic candidates, and which, if any, could uphold progressive ideals. 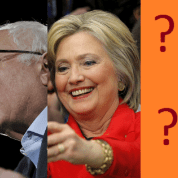 This presidential race has been the most difficult choice for me in almost 35 years of being a voter. Both major Democratic front-runners have significant flaws in my opinion. I would never consider any of the Republican candidates fit for the presidency.

This year, I have to choose between an avowed socialist who has good ideas (but whom I don’t think can be successful in the general election) and a centrist who I think is aligned with big-money interests (but who is the most intellectually and experienced person to actually lead the ENTIRE country.) This is a classic case of "damned if you do, damned if you don't." The third candidate (whom I happened to have known while we were both in high school, ironically) is not experienced enough this time around to be a world leader, although he’d make a great vice-president. I believe that I will choose Hillary Clinton not because I am really excited about her candidacy, but because she is the most capable leader of the three. We need someone who can truly lead and inspire renewed confidence in America, from both inside the country and outside, after this awful, racially- and socially divisive campaign season.

I believe that climate change is the most important issue of the 2016 election, and it will probably be the dominant issue for the next generation.  All three Democrat candidates, Clinton, Sanders and O'Malley, have strong positions, so voters will have to base their decision on who can best implement their policies.  While I like the carbon tax approach from Senator Sanders, I tend to think that the more pragmatic, incremental approach of Senator Clinton is most likely to actually achieve something.  A key issue here in West Virginia is which candidate can bring the economic transition away from fossil fuels that our state needs.  Again, from the standpoint of actually implementing economic policy, I think Clinton has some advantages.

3. John Carico, a journalist for the Fifth Column and a delegate for the Industrial Workers of the World radical labor union.

I am promoting Bernie Sanders, not because I believe any president can provide the change we need, but as a tactical effort to move the conversation of alternatives to capitalism to the forefront of the dialogue. I believe Bernie Sanders' record speaks for itself, and as long as we must engage in representative democracy as opposed to direct idea based democracy, he's the best, most promising shot we have. Clinton will simply maintain the corrupt corporate establishment.

4. Joe Gray, radio show host of 7 Generations which is broadcast from the Campus of Shepherd University, Shepherdstown, West Virginia activist

There are several issues of utmost importance at stake in the current U.S. presidential elections: global warming, the influence of money on elections, income inequality, and the reduction of world militarism. Based on his track record and avowed positions Senator Bernie Sanders offers the best hope of navigating successfully. Even if a Republican lead congress blocked his agenda, at least he would be able to exercise the veto to ward off the worst excesses of corporations and right wing extremists. Hillary Clinton would be a better alternative to any Republican candidate but has many negatives due to her close ties to big money and the corporate world. If Donald Trump were to win the elections we would be in for a wild and dangerous ride based on his alliance with corporate power, his expressed xenophobia, elitism, paranoia and militarism and denial of global warming.

As an organization, BAJI (Black Alliance for Just Immigration) does not support political candidates. Personally, I am undecided. None of the candidates have laid out a broad, visionary platform that addresses our country's harsh immigration enforcement policies, the mass criminalization of Black Americans and Black immigrants, or the undeniable economic inequality faced by Black people across the board. I know that I may be criticized for not articulating the concrete policy change that I want to see - I do have ideas. But we shouldn't have to do their job for them! I will support the first candidate with a platform to bring about justice, equality, and liberation!

There is no candidate at this time that I can endorse, because I don’t see any who are willing to address structural racism in the U.S, even as popular movements have brought these issues to the forefront for several years now. While I am not surprised by the outright demagoguery of the GOP candidates, I am dismayed by the dearth of progressive candidates willing to champion and detail plans for a true shift and transformation to create a multiracial democracy that works for everyone. I remain hopeful that the grassroots can influence those who claim to represent the people to be broad and ambitious in their platforms as the race continues.