It's been over a decade since a U.S. sponsored coup temporarily overthrew Venezuela's democracy, and Washington is still plotting. 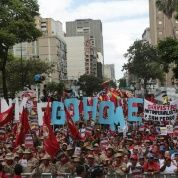 Shortly after being returned to power by popular force in April 2002, then president Hugo Chavez quickly warned the United States was already planning its next move. Chavez had been ousted from office for just under two days in early April, in a coup carefully choreographed by Venezuela's business elite, renegade military elements and the United States.

Then, as U.S. president George W. Bush entered his second term in 2005, Washington appeared to redouble its efforts to remove Chavez. A month after Bush was sworn in for a second time, Chavez said his government had uncovered another assassination plot. The plot was uncovered just weeks after then U.S. secretary of state Condoleezza Rice described the Venezuelan leader as a “destabilizing force.” In September that year, Bush again lashed out at Venezuela, accusing the country of failing in its fight against the narcotics trade.

Another major coup plot was foiled in 2006, when Venezuelan authorities said they found evidence the U.S. embassy in Caracas had been secretly collecting military information. That same year, the Department of State began barring certain arms sales to Venezuela. This was the beginning of what would later become a key pillar of U.S. policy towards Caracas – sanctions.

In 2011, state oil company PDVSA was hit with U.S. sanctions, while in 2013 state arms manufacturer CAVIM was also sanctioned. More sanctions were imposed in late 2014 against Venezuelan government officials. Then in March 2015, U.S President Barack Obama issued an executive order imposing another round of sanctions, and describing Venezuela as an “unusual and extraordinary threat” to the United States. This was the most controversial round of sanctions, and sparked widespread condemnation in the region. The Obama administration was eventually pressured into admitting Venezuela doesn't pose a threat to the United States, though the sanctions remained in place.

The evolution of economic pressure on Venezuela is perhaps the most striking example of the continuity of Venezuela policy between the Bush and Obama administrations. However, this overt aggression against Venezuela has likewise been accompanied by a continuous campaign of subversion, largely in the vein of U.S. activities in the lead-up to the 2002 coup.

Much of this took place through groups like USAID, the U.S. National Endowment for Democracy (NED) and the Office of Transition Initiatives (OTI).

In a 2006 diplomatic cable made public by WikiLeaks, then U.S. ambassador William Brownfield said both USAID and OTI were playing central roles in a strategy to oust Chavez.

“This strategic objective represents the majority of USAID/OTI work in Venezuela,” Brownfield wrote at the time.

According to investigations by the U.S.-Venezuelan lawyer Eva Golinger, Between 2004 and the time of the cable's initial, secret publication in 2006, USAID spent close to US$15 million on operations in Venezuela. Much of this involved supporting around 300 so-called civil society groups – largely a collection of far right, anti-government groups. One prominent recipient of U.S. funding was Sumate, an anti-Chavez political group founded by right-wing firebrand Maria Machado. Machado was a signatory of the Carmona Decree – the political manifesto of the short-lived 2002 coup government. The fact that one of the key recipients of U.S. aid was a coup plotter has led many in Venezuela to accuse USAID of being opposed to democracy.

The key factor making such a move even more rational in Venezuela is the fact that unlike the United States, Caracas is still facing coup attempts backed by a foreign belligerent. In early 2015, the Venezuelan government uncovered yet another brewing coup attempt. This time, plotters being paid in U.S. dollars were planning to incite street violence, then carry out a series of coordinated bombings targeting key government sites. President Nicolas Maduro accused opposition leaders of mostly being aware of the plot well in advance, and said the plan was aimed at culminating in the collapse of his government.

As new elections approach on Dec. 6, concern is again mounting that Venezuela's opposition could be planning more destabilization. However, it's unclear which route the United States will take. Will Washington continue its simmering campaign of underhand destabilization, or will it opt for another open coup attempt like in 2002?