Secretary of State Rex Tillerson's agenda purportedly aimed to address bilateral relations between different nations and the United States, but instead it became a campaign of repeated interference in the internal affairs of Venezuela. 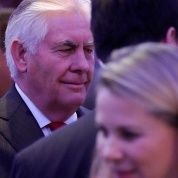 Tillerson toured Latin America, maintaining the situation in Venezuela as the main agenda item in his visits to Mexico, Argentina, Peru, Colombia and finally, Jamaica.

Though the agenda in each nation referred to bilateral issues, one of the points reiterated during the visits was actions against Venezuela.

During his stay in Mexico, Tillerson said that "the United States will use all its political, diplomatic and economic tools to confront the situation in Venezuela."

"In the history of Venezuela and in other countries of Latin America and South America the army has often been tha agent of change when things are bad, and the leadership can not longer serve the people," said Tillerson just before embarking on his tour.

Given these statements, the Venezuelan National Armed Forces expressed their support for the Venezuelan president. At the same time, they criticized that the U.S. official of having "no moral authority to issue any kind of judgments on the internal politics of the South American country."

Tillerson said that "it would be easier if President Nicolas Maduro decides to leave power on his own."

"If the kitchen gets too hot for him, I am sure he has some friends in Cuba who can give him a nice farm on the beach and he can have a nice life there," said the Secretary of State.

Even Brazil's Minister of Foreign Affairs, Aloysio Nunes - hardly a friend of Venezuela - responded by saying that the change in Venezuela will be made by the people and not by the outsiders.

"The situation is becoming quite dire in Venezuela, so one of the aspects of considering sanctioning oil is what effect would it have on the Venezuelan people, and is it a step that might bring this to an end, to a more rapid end," said Tillerson while in Argentina.

President Maduro said he was prepared to defend freedom and sovereignty, after learning that Argentina and the United States of America were looking into imposing oil sanctions against Venezuela.

"Argentina has just threatened us with an oil embargo. We are prepared," said the Venezuelan head of state. "Venezuela, workers of the oil industry, imperialism threatens us. We are ready to be free and nothing and nobody is going to stop us."

Interference in the Venezuelan elections

In his visit to Jamaica - which was the last stop during his tour - the U.S. Secretary pointed out that the United States' intention was "to act with all possible effort to persuade the Venezuelan Government."

Tillerson also warned of possible measures towards neighboring countries as part of the pressure on the Maduro government.

The top U.S. diplomat's visit to five countries of Latin America and the Caribbean that was supposed to be about strengthening bilateral relations with each nation and evaluate issues of interest, was marked by persistent interference in the affairs of Venezuela.