By 2002, it had become clear to policymakers in the United States that Latin America, considered by U.S. political elites to be their own backyard, was slipping away. They needed to act if they wanted to maintain their control over the region. 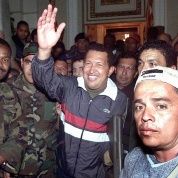 The wave of progressive and revolutionary governments in Latin America began in 1998, with the election of Hugo Chavez as president of Venezuela. That marked the beginning of the Bolivarian revolution. Ecuador, Bolivia and Argentina would soon follow.

A man committed to the people, first and foremost the poor and the working class of Latin America, Chavez’s government would rapidly move to the left, a move that provoked a clash with both the domestic ruling class and the interests of U.S. imperialism.

The desire of U.S. to send a message to the region, namely those who saw Venezuela under Chavez as source of inspiration, would lead them to play an active role in the April 11, 2002 coup that saw President Chavez briefly ousted from power. The history of Latin America over the last decade would be radically different had a popular uprising against the coup not returned Chavez to power two days later.

That the United States would be involved in an effort to put an end to a leader who posed problems for its corporate and political interests, and squash the example of the Bolivarian revolution before those problems grew, is not surprising. Fortunately, as with the failed Bay of Pigs invasion against Cuba’s Fidel Castro, the attempted coup would only serve to consolidate Venezuela as the leader of a continental anti-imperialist project.

The U.S. maintains it was not directly involved in the attempted overthrow of a democratically elected government but, as the old saying goes, never believe anything until it has been officially denied.

There is ample evidence the U.S. not only knew about the coup plot but actively supported it.

That Wilson, now deputy national editor at the Washington Post — an outlet that has hardly been friendly toward South America’s leftist governments — would go on the record about his suspicions should indicate how clear the signs were that the U.S. was involved.

Among those who traveled to the United States before the coup was Pedro Carmona, the would-be unelected “president” during the short lived coup regime.

IN DEPTH: Anniversary of Venezuela’s 2002 Coup

Who the coup-plotters met with in the United States is also of importance, as several have sordid pasts with respect to Latin America.

Then-U.S. President George W. Bush appointed Otto Reich as his point man on Latin America. According to the Observer newspaper, Reich, a fervently anti-Castro right-wing Cuban-American, met with the coup plotters just months before the events of April 2002. The plotters would also meet with Elliot Abrams, a senior figure during the presidency of Ronald Reagan and a senior director at the National Security Council in Bush’s administration.

Abrams made a name for himself as a staunch anti-communist, helping implement the U.S.'s Cold War strategies, including the 1973 coup against Salvador Allende in Chile and the sponsorship of brutal dictatorships and right-wing paramilitaries throughout the hemisphere.

Abrams would also be convicted for withholding information from the U.S. Congress regarding his efforts to illegally fund the Contras in Nicaragua.

The coup-plotters also allegedly met with John Negroponte, then-U.S. ambassador to the United Nations. Negroponte is best known in Latin America for his tenure as ambassador to Honduras in the 1980s when U.S. military aid to the country’s right-wing government dramatically increased as part of an effort to use the country as a base to suppress national liberation struggles in Nicaragua, El Salvador and elsewhere.

U.S. Department of State documents show that Negroponte knew about human rights abuses being committed by the Honduran regime at the time but willfully played them down -- and actively worked to undermine any efforts to achieve peace that allowed for the existence of a politically active left.

U.S. Knew of the Plot in Advance

Through a Freedom of Information request, journalist Eva Golinger found, in startling detail, that the U.S. Central Intelligence Agency at the very least knew of the plot to oust Chavez.

An intelligence brief entitled, “Venezuela: Conditions Ripening for Coup Attempt,” dated April 6, 2002 — a mere five days before the coup plot would be carried out — explicitly states that a coup was set to take place.

“Dissident military factions, including some disgruntled senior officers and a group of radical junior officers, are stepping up efforts to organize a coup against President Chavez, possible as early as this month, [CENSORED]. The level of detail in the reported plans – [CENSORED] targets Chavez and 10 other senior officers for arrest.”

The brief pinpointed precisely how the coup plotters intended to set off the president’s overthrow, saying, “To provoke military action, the plotters may try to exploit unrest stemming from opposition demonstrations slated for later this month.”

ANALYSIS: The 47-Hour Coup That Changed Everything

U.S. intelligence knew of the intimate details of the plot well in advance without informing the Venezuelan government; the coup proceeded exactly as predicted; and the coup-plotters had recently met with senior U.S. officials. At a minimum, the U.S. was an accessory.

On April 11, 2002, the opposition in Venezuela staged a large rally in the capital of Caracas. The organizers deliberately redirected the march toward the presidential palace, where government supporters had assembled.

As the opposition march approached the palace, shots rang out and people on both sides were killed.

It would later be revealed that many of those killed were shot in head, purportedly by snipers, lending credence to the argument that the events of that day followed a premeditated plot.

Venezuelan private media would deliberately manipulate the days events to make it seem as if Chavez supporters had fired upon the opposition rally, blaming the government for the violence.

With the coup plan in motion, dissident military officers then kidnapped President Chavez, falsely claiming he had resigned.

Pedro Carmona, then the head of Venezuela's chamber of commerce, was subsequently, and illegitimately, installed as the head of the de facto regime. The regime would announce the dissolution of the National Assembly, the Supreme Court, and the electoral authority, as well as the dismissal of all high-level officials. It also announced it would revert the official name of the country to the Republic of Venezuela, eliminating the word “Bolivarian,” which had been added as part of the 1999 constitution.

IN DEPTH: The War on Venezuela’s Democracy

An investigation by the Venezuelan government found that two high-ranking U.S. military officers, Lt. Col. James Rodgers and Army Col. Ronald MacCammon, met with the Venezuelan military officers who supported the coup, telling them that they had the support of the U.S. government. Rodgers allegedly stayed with the officers for the entire length of the de facto regime of Carmona.

The U.S. government denies these allegations, claiming the two officers only briefly visited the headquarters of the coup plotters.

Wayne Madsen, a former intelligence officer with the U.S. Navy, told the Guardian that Navy vessels aided the coup plotters, jamming signals of the Venezuelan military

Meanwhile, in Washington, Bush adviser Otto Reich would summon the ambassadors from Latin America and the Caribbean and allegedly state that the U.S. government did not view the events as a coup and that it would support the Carmona government.

Reich would claim in 2009 that he actually told them the opposite.

"I instructed Ambassador Charles Shapiro to find Mr. Carmona and tell him that if he swore himself in, violating Chavez's own constitution, that he could not count on the support of the United States government, and we would have to impose economic sanctions,” said Reich in response to questioning by a U.S. lawmaker.

Carmona would also confess to having met with Shapiro on April 12, 2002, the day after the coup. Carmona did indeed violate the constitution by swearing himself in as president, yet there were no sanctions. Instead, Washington recognized the regime.

The same day as the coup, White House spokesperson Ari Fleischer told the press that President Chavez had repressed a peaceful demonstration, ordered the armed forces to fire on protesters, had dismissed the vice-president and cabinet, and that he had resigned. Each statement was categorically false.

The U.S. government was quick to recognize the de facto government of Carmona, calling it a “transitional civilian government” while failing to mention that Chavez had in fact been kidnapped and that subsequent government was in power only as the result of a military intervention.

What neither the coup plotters nor U.S. intelligence anticipated was the dramatic response of the Venezuelan people and their determination to defend their duly-elected president.

Tens of thousands of people took to the streets, demanding the return of Chavez, which inspired the loyal sections of the Venezuelan military to act and rescue Chavez.

On April 13, the coup collapsed.

Only after the coup collapsed did the U.S. government, in a desperate effort to save face, acknowledge that the events of April 11-12 were coup.

U.S. interference in Venezuelan affairs would not end with its support for the 2002 coup, however. The opposition would seek the oust Chavez later in 2002 through an oil-sector strike that nearly destroyed the Venezuelan economy and again through a recall referendum in 2004, both of which failed.

Despite commitments from U.S. President Barack Obama early in his presidency that the era of U.S. interference in Latin America was over, the policy of his government remains the same as it was during the Bush years. To this day the U.S. continues to finance the political opposition in Venezuela to the tune of millions of U.S. dollars a year, with a high-ranking official from the National Endowment for Democracy traveling to Venezuela in March 2015 to meet with politicians from the right-wing opposition.

ANALYSIS: US Interference in Venezuela Since 2002

On March 9, 2015 Obama issued an Executive Order that declared Venezuela a threat to U.S. national security, language his administration justified as a formality required to impose sanctions.

But Latin America in 2015 is not the same as it was in 2002, when only a few countries spoke out against the coup. Every Latin American country -- and even member of the right-wing opposition aware of the unpopularity of U.S. intervention on their behalf -- has condemned Obama's stance on Venezuela.