International Day for the Abolition of Slavery comes with a caveat in Brazil. South America's giant — a “sleeping giant,” some reckon — was last in the Western Hemisphere to subscribe the practice illegal by passing its self-acclaimed Golden Law in 1888. 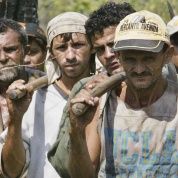 Just over 129 years on, slavery's more apt than ever, evidenced by other names: forced labor; child labor; domestic servitude; human trafficking; Brazil's decrepit yet sprawling prison complex, the third largest in the world, according to the International Centre for Prison Studies; and last, but not least, attempts at passing a recent labor decree which puts at risk the very definition of slave labor.

Hence, does International Day for the Abolition of Slavery hold any moral weight when speaking about Brazil?

“Since the invasion of the country” by Portuguese sailors and their lot, land that would become known as Brazil claims a drastically reduced history of 517 years. Of that period “We've experienced, officially, 388 years of slavery.” Of the remaining 129 years “free of slavery,” Belchior deduced, Brazil fell victim to “two dictatorships” lasting 61 years.

Belchior concludes his thesis by simple subtraction. Hence, Brazilian society as a whole, more importantly taking into account its majority Black population, has only known 68 years of freedom. Of this total, those who experienced firsthand the harsh realities of slavery and dictatorships “haven't been able to distinguish” between that and their so-called freedom.

And the numbers couldn't be further from Belchior's claim. The latest report issued by the Brazilian Institute of Geography and Statistics, IBGE, reveals that 1.8 million infants and adolescents between five and 17 were involved in some form of labor in 2016. Closer observation shows that of this total, some 30,000 kids between five and nine, and roughly 160,000 between five and 13, worked last year, according to O Popular.

“All work ranging from five to 13 years of age is deemed infant labor which must be eradicated.” said IBGE analyst Flavia Vinhaes Santos. Meanwhile, the administrator of the research, Maria Lucia Vieira, stressed that people in the 14 to 17 years age group “are still considered children, hence, labor restrictions apply.”

The latest “dirty list” of companies incorporating slave practices includes two of Brazil's largest agribusinesses, JBS Aves, a meat-packing and exporting giant, and Cutrale, one of the largest orange juice exporters in the world.

Prepared by the Ministry of Labor, though unpublished by the Federal Government, the list cites workers who accrue company debt even before receiving their first paycheck, exhaustive work hours without remunerated weekend rest, and, in some cases, workplaces without a bathroom as proof of current slave driving.

The majority of the businesses listed on the report (31 percent) comprise the agricultural sector.

Just this week, 19 people were rescued from slave labor by authorities in the state of Bahia. Located in the municipality of Ribeirao do Largo, the farm hands had no access to clean drinking water, electricity or bathrooms. According to Seu Jornal, they handled agricultural pesticides without protective gloves or masks and were required to sleep in the same depot where the toxic chemicals were stored.

To give a better idea, 5,223 people were rescued from slavery in 2003. The number of rescues topped the charts in 2007, when 5,999 people were liberated. However, the number of operations to rescue people and inspections have gradually decreased over the past three years.

Over the past two years, human trafficking has increased from 740 in 2015 to 797 to 2016, an increase of eight percent, according to Globo. However, like other proclivities comprising the full slave practice dossier, the human trafficking index, so often shrouded in silence, may be gravely underreported.

Brazil's exhaustive ethos of "racial democracy," heralded into the public imagination around the turn of the 19th Century, was a cliché remark intended to smooth the wrinkles of history and brush away centuries of grave human rights violations, slavery no doubt. Conceptually, it was part and parcel of keeping the throngs charmed with a term alluding to equality while, in effect, maintaining a hyper-stratified society steered by institutional racism and motored by one's toil with no pay. The results, a country marked by an ongoing penchant for slave driving.

Though a preliminary decision issued by Supreme Court Judge Rosa Weber suspended Brazil's recent labor decree, the resolution was temporarily adopted by the government and published on Oct. 16 in the country's official gazette, altering the terms by which people who are exploited under conditions analogous to slavery could benefit from legal proceedings.

One of the measures outlined in the decree redefines slavery as being confined to "restrictions on the freedom of movement" of workers. However, experts note that such a reformulation pushes the country back to May 13, 1888, when the Golden Law was to supposedly have abolished slavery in Brazil.

Another sticking point that provoked outrage among critics of the decree was the newfound discretion of the labor ministry to divulge or disclose the names of those companies involved in slave labor practices.

Attempting to defend its decision, Brazil's de-facto president Michel Temer and his administration argued that “serious deviations” can result from going overboard with appeals made to the position of workers, citing an alleged case where an employer was intimidated, insulted and beaten by employees for not having put a soap dish in staff bathrooms.

While the decree's fate carries on in court, Ricardo Rezende, a preacher and professor, reminded that despite its suspension, the Interamerican Court of Human Rights found Brazil guilty for failing to prevent the practice of slavery and human trafficking last year.