After a year of Trumpism, the 45th president of the United States will deliver the "State of the Union" on Jan. 30 addressing the country. 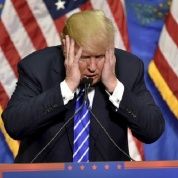 RELATED:
How U.S. Electoral College System Is Based on Slavocracy

As mandated by the U.S. Constitution's Article II, Section 3, the serving presidents "from time to time give to the Congress information of the state of the union, and recommend to their consideration such measures as he shall judge necessary and expedient."

But how will Trump defend his nebulous, self-aggrandizing mannerisms to the rallying cries of the country from the immigrants, women, people of color, low- and middle-income earners and members of the LGBTQI community, which are throbbing with pain and despair in just one year of his presidency?

Trump has little to say to the above-mentioned communities. He does, however, have a lot to say to the white and the wealthy inhabitants of the United States, whom he has largely represented and defended over the course of his presidency.

Critics have indicated that through his address, he will possibly bask in the glory of his partisan and nationalistic policies which have deepened the chasm in the country, dividing it along the lines of race and class.

For instance, Trump's signature myopic "America First" policy, which negates the achievements of immigrants and low-income people of color living in the country's periphery.

Trump has categorically failed to recognize and acknowledge the contributions of immigrants as he continues with his spree of deporting thousands of people of color, many of them to conflict-ridden regions. He has repeatedly used dissident remarks to describe them, including the recently-made racist "shithole" countries remark in reference to the African nations, Haiti and El Salvador.

Just five days before the State of the Union address, the White House released "a framework on Immigration Reform & Border Security," which outlined Trump's plan of action, such as, "25 billion trust fund for the border wall system, ports of entry/exit, and northern border improvements and enhancements, appropriating additional funds to hire new DHS personnel, ICE attorneys, immigration judges, prosecutors and other law enforcement professionals, hiring and pay reforms to ensure the recruitment and retention of critically-needed personnel, ensure the prompt removal of illegal border-crossers regardless of country of origin," among other stipulations.

Roughly ten days before the address, reports indicated that at least some part of his empire, such as his golf courses, were funded by the Russian mafia. In the first week of January, a new report showed how Trump's administration has decided to waive punishment for megabanks Citigroup, JPMorgan, Barclays, UBS and Deutsche Bank, which were convicted of manipulating global interest rates and other fraudulent activities.

Trump also owes Deutsche Bank at least US$130 million. The waivers were quietly announced online over the federal register during the Christmas holiday week.

During his time in office, he has consistently attacked low- and middle-income immigrant taxpayers while stealthily granting copious concessions in the form of tax breaks to the uppermost echelons of the United States, including himself.

According to the Center on Budget and Policy Priorities, CBPP, a D.C.-based policy and research institute, Trump's 2018 budget which has a vision of rolling back an estimated US$2.5 trillion over the next decade, will derive it by cutting about two-thirds (66 percent) of the budget.

Nearly 3.2 million people did not have health insurance in the country in 2017, per the polling company Gallup, while Trump tried to repeal Obama's Affordable Care Act. Thanks to Trump's ineffective healthcare policy, regular insurance premiums have risen substantially, owing to irregularities in the president's fluctuating narrative.

According to a Kaiser Family Foundation analysis, premiums for average-priced policies, offered on and off the health insurance exchanges which were created under the Affordable Care Act, rose by over a third of its original price compared with 2017.

"It all added up to chaos and uncertainty in the insurance market," Sabrina Corlette, a Georgetown University research professor and insurance expert, told KTOO News. "And uncertainty always leads to higher premiums."

Washington's warped priorities were made even more apparent when the United States chose to withdraw from the Paris Climate Agreement while making a case for increasing military expenditure for its failing "war on terror" in Asia and the Middle East.

Meanwhile, the Environmental Protection Agency, EPA, suffered significantly as reports suggest the White House took down several important climate-change documents during a revamp of the EPA's website last year, some of which are yet to be reposted.

Trump signed 58 executive orders in one year's time, 17 more than his predecessor, and the highest number during the first presidential year in this century.

At 39 percent, Trump's approval rating is at an all-time low, which makes him the most unpopular U.S. president in modern history. According to a new NBC News/Wall Street Journal poll, only 39 percent of U.S. voters approve of Trump's performance in office.

His Race and Words

The U.S. president's jingoist fervor has stoked the egos of racists, Republicans and those on the far-right alike.

From his "shit hole" comments to his nuclear trigger comparisons with the North Korean leader, the former TV personality's limited vocabulary can be equated to that of a child.

A new survey which scrutinized the last 15 presidents' vocabulary based on the first 30,000 words each president spoke in office, Trump scored the lowest of all the presidents, with his vocabulary being that of a mid-fourth grader. The survey used several techniques, including a popular one known as the Flesch-Kincaid scale, which was developed in 1975 for the U.S. Navy to assess the relative difficulty of training manuals.

Usually, high profile speeches are "built with input from an array of White House advisers and administrators, and depending on the topic other high-ranking officials within the administration may take the lead," wrote columnist Manuel Roig-Franzia for Washington Post.

Trump has used the services of Stephen Miller, a close ally and a known far-right proponent, also known to be the president's wordsmith.

“He (Trump) trusts Stephen almost like he’s a catalogue of his phrases," Roig-Franzia wrote.

Miller is most known for his anti-immigrant stance as he wants "a policy that favors skills-based recruitment for extended families, and he wants a lower immigration rate overall," New York Times reported.

Roger Stone, a longtime Trump advocate who advised the billionaire in the early stages of his presidential campaign, shed light on Trump's success as an orator despite his limited vocabulary.

"His speaking style is effective because he speaks colloquial English," Stone told the Washington Post. "It’s direct and it’s not polished. Therefore, it’s not phony. This is a guy, who, although he is a billionaire, has never lost his Queens roots."

Although mocked for his "rhetorical tangents, his oversimplifications, his non sequiturs and his factual errors," he has the ability to strike a chord with "the millions of voters (who) heard someone who talked like them," Roig-Franzia wrote.

The overwhelming "millions of voters" who sided with Trump to bring him to power are essentially white. As Ta-Nehisi pointed out in an essay he penned soon after Trump's election, that this was essentially a "white lash."

According to a book, titled, "Encyclopedia of White Power: A Sourcebook on the Radical Racist Right," it is the kind of white supremacy which stems from a fear of miscegenation or mixing bloods that may endanger their kind.

Some have even gone as far as promoting the idea of forced birth control among non-whites while weaning it from whites.

Trump once retweeted someone with the handle “WhiteGenocide,” which refers to this theory. The president's active support for white supremacist ideology can also be found in the close political company he keeps, ranging from his former White House chief strategist Steve Bannon, along with his word whisperer, Stephen Miller, who is known to believe that non-white immigrant groups are a physical, cultural, political and moral danger to “white” countries.

In a March 2016 Sirius XM show, Bannon told Miller, “When you look and there’s got 61 million, 20 percent of the country, is immigrants — is that not a massive problem?" to which Miller agreed.