The street bearing the name of Dolores Cacuango, found in a working-class neighborhood in northern Quito, is a modest three-block-long reminder of a woman who dedicated her life to the indigenous struggle for land, respect and education in Ecuador. In turn, the Cristobal Colon Avenue, named after the Genovesi colonist, extends across the city. 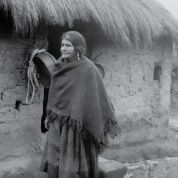 As it is common with national narratives, those personalities that are too problematic to the status-quo, but the State feels compelled to pay a symbolic tribute, get a marginal spot in history books. Such is the case of Dolores Cacuango.

Cacuango, also known as Mama Doloreyuki, was born on October 26, 1881, to a humble family in the middle of the military confrontation between conservatives and liberals in Ecuador. Her family was part of the ‘concierto indians,’ those at the bottom of the economic scale working for haciendas in exchange for a small piece of land known as ‘huasipungo.’ There, Dolores and her family endured the injustices of the racist system that oppressed the working class for life.

She escaped to Quito from her life at the Hacienda before they forced her to marry. There, she found a job as a maid at the house of a military officer, learned how to speak, read, and write in Spanish, and deepened her consciousness on the situation of indigenous peoples and campesinos in urban and rural environments. Her experience made her come back to her home town in San Pablo Urco and fight for the rights of the working class.

Once back she married Luis Catacuamba. Only one of the children they had together, Rafael, survived childhood.

By 1916 the liberal revolution led by Eloy Alfaro had succeeded, promising to give back to the indigenous peoples the land seized by the Church and large landowners. But the people soon realized that laws alone weren’t enough. Landowners retained the same old practices and many campesinos were still landless. Things worsened with the Juliana Revolution of 1925, contributing to the polarization of the economic conditions that led to the Cayambe uprising.

"We're still committed with the struggle of Mama Dolores Cacuango. Today, one more anniversary of her passing away."

In 1926, the people of Cayambe stood up against the selling of their community lands to a rich landowner, shaping future indigenous movements. Dolores played a key role in the rebellion and became known for her fierce speeches, both in Kichwa and Spanish, and included calls for fair education in their mother language and respect for women and their work.

She was well aware of the difficult situation of indigenous women in the Haciendas, often being raped, beaten and forced to work without any remuneration, but appealed to the whole of society with her words.

“We want the indigenous to know who they are giving birth to, so they are never again raped by their devil boss, so no more children are born without a father and be despised children,” she used to say.

Socialist groups in rural and urban areas soon supported the movement, seeing in it a sign of the contradictions of capitalism and a movement aiming for a more just society, and Dolores became a prominent leader in the Communist Party of Ecuador (PCE).

Since then Dolores was active in the struggle for land and education for the rest of her life. She helped forming unions and organizing workers, in and outside of Cayambe, and took part in different uprisings, demanding an end to violence against women and better working conditions.

Along with two other leading figures of the indigenous movement, Transito Amaguaña and Jesus Gualavisi, and the help of the PCE, Dolores founded the Indigenous Ecuadorean Federation (FEI) in 1944, the first of its kind in the country.

One of Dolores biggest concerns was education, as she witnessed how her people were often fooled and tricked due to their ignorance of the writing system. It’s rumored she memorized the Labor Law and once told a high level officer, “You minister are lying! you change the contents of the Labor Law because you’re on the side of the owners!”

Out of her concern and the experience helping her own community, and under the auspice of the PCE, she founded the first autonomous indigenous school in 1945, where lessons were taught in both Kichwa and Spanish. The project was never recognized by the education ministry, as the government saw in it a breeding ground for communists. Her partners from the party, and also members of the communities helped finance the project, while her only surviving son took followed in her footsteps, and started teaching.

The first school was founded in Yanahuayco at the ‘Tierra Libre’ union building. The project then extended to Chimba, Pesillo and Moyurco, where the indigenous movement had a strong presence.

The dictatorship of General Ramon Castro Jijon brought difficult times for Dolores and everyone involved in liberation movements. In 1963, the government shut down the schools, prohibited Kichwa from being a teachable language and raided Dolores’s house, forcing her to go into hiding. She continued her activities against all odds, visiting partners in struggle during the night and supporting movements in disguise, as the government looked for her.

After a year of underground activities and a strong pressure from the people, the regime of Castro Jijon decided to implement an agrarian reform. Despite being far from perfect, Dolores decided to support it and marched with more than 10,000 indigenous people from Cayambe all the way to Quito, to show the strength of the indigenous movement at the time and gave a historical speech at the University Theater.

Her Kichwa words were not understood by everybody at the time, but fragments of the translation remain in the collective memory of Ecuadoreans, indigenous or not, and even beyond the border, bearing a stronger significance than the name of a street.

“We’re like the grass of the mountain that grows back again after being cut, and as mountain grass we will cover the world.”