As did Mabel and Robert Williams, Amilcar Cabral, Francis Ona, Nelson Mandela, even Robert Mugabe, Martin Luther King Jr. began his protest in earnest. Peaceful demonstrations, moral appeals, sit-ins, not to mention biblical text, were all employed against the meat and muscle of U.S. racism. 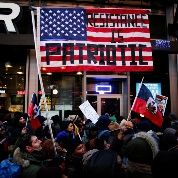 These were times of sunder and muck, where little, if any, was spared in the way of Jim Crow, mounting attitudes left in the wake of colonialism and chattel slavery.

'The Most Dangerous Negro': The Radical Legacy of Martin Luther King

Though King's social upbringing, educational and religious training left him ill-prepared to take up the armed struggle - unlike Roman Catholic Priest, Camilo Torres Restrepo, who joined guerrilla forces in Colombia – he did hire the Deacons for Self Defense and Justice, a Black armed guard, to accompany him on marches. In fact, historian Annelieke Dirks reminds that the icon for peace and integration maintained so many guns at home that one observer commented his “place is an arsenal.”

However, King's message evolved, matured, finding its way to napalm scorched bodies of little boys and girls in Southeast Asia. “We are merely marking time in the civil rights movement if we do not take a stand against the (U.S.) war” of aggression in Vietnam, King told a reporter.

New York City's Riverside Church would be the ground in which King's evolution was made public, declaring that his responsibility towards humanity placed him among those who are “bound by allegiances and loyalties which are broader and deeper than nationalism.” It was April 4th, 1967, amid the dawn of the Black Panther Party, one year before the Republic of New Africa, networking between African independence movements and African freedom struggles in the diaspora – in all, a sundry of resistance.

From the pulpit, King took two firm steps away from a personal void that, according to confidants and close friends, had left him in a state of deep depression. Why? The bandwidth of the civil rights movement had reached its peak.

“These niggers will be voting Democrat for the next 200 years,” former U.S. President and political hero of the Civil Rights and Voting Rights Act, Lyndon B. Johnson, is alleged to have said in 1964. However, as the push for integration and civil rights legislation – something Johnson often referred to among friends as “the nigger bill,” gave way to self-determination and Black power, King's moral compass gravitated in a way that would put him in the lethal crosshairs of the U.S. government.

“My conscience leaves me no other choice” than to “break the betrayal of my own silences” on the issue of Vietnam, King preached. Calling out the United States as “the greatest purveyor of violence in the world,” he claimed that the government was testing its latest arsenal on the people of Vietnam “just as the Germans tested out new medicines and new tortures in the concentration camps of Europe.”

Four years had passed since his “I Have a Dream” speech, a dream that he said, “had turned into a nightmare.” Now, leaflets were being dropped by the Vietcong on wet rice fields: 'Black man go home! This is not your war!' They could have been distributed by King himself.

“Facile” and “slander” was how the New York Times described his words. The editorial went on to note that any attempt “to divert the energies of the civil rights movement to the Vietnam issue is both wasteful and self-defeating.” Instead, the paper advised that he focus his efforts on Black issues confined to the United States, considering “the intractability of slum mores and habits.”

The Washington Post, for its part, theorized that a maladjusted King wailed “sheer inventions of unsupported fantasy,” lamenting that “many who have listened to him with respect will never again accord him the same confidence.”

Untold numbers of local Black newspapers in the United States ripped into his words similarly. The Pittsburgh Courier mused that King was “tragically misleading” African-Americans on matters that were “too complex for simple debate.”

Such condemnations echo recent remarks by U.S. President Donald Trump, for if Haiti and African nations are home to immigrants not welcomed by the land of the free, what can be said of the long-lost descendants of those “shithole” countries living in the United States today?

Indeed, a younger generation had dawned before King's very eyes. They had read “Negroes with Guns” by Robert Williams, a family man who established an armed guard for the Black community in Monroe, North Carolina, eventually having to flee the United States for a life of political asylum in Cuba and China. They learned about African nations struggling against European colonialism and the assassination of Malcolm X. They heard Fannie Lou Hamer say that she was “sick of the racist war in Vietnam when we don't have justice in the United States.”

Now people like Huey P. Newton, co-founder of the Black Panther Party, was on the scene, promising to send rebels to Vietnam to “fight the cowardly American aggressor.”

Faced with relentlessness state repression, it was the young generation who managed their own mill, ready to churn the grist of U.S. Imperialism within. Though he never joined their ranks, King commented that young people are in “the revolutionary spirit and they're concerned about revolutionzing certain values that have been existing in our society that need to be revolutionized.”

At Riverside Church, King admonished that the United States had been “wrong from the beginning” in its war against Vietnam. It wasn't just a mistake but “a symptom of a far deeper malady” shrouded in “profit motives and property rights (that) are considered more important than people.” He decried the triple threats so fundamental to the U.S. ethos, “racism, materialism, and militarism,” encouraged young men to declare themselves conscientious objectors when faced with the military draft and called for the Uncle Sam to enact a unilateral cease-fire.

He was now squarely aligned with oppressed peoples of Africa, Asia and other parts of the world calling for an end to the Vietnam War. Not only that, King, whether he was aware of it or not, was showing real solidarity with none other than Ho Chi Minh, leader of Vietnam's National Liberation Front, which routed both French and U.S. Invaders. Having spent time in the United States, living in Harlem for a period, Minh would publish a report of his observations, noting that “it is well-known that the Black race is the most oppressed and the most exploited of the human family...What everyone does not perhaps know is that after sixty-five years of so-called emancipation, American Negroes still endure atrocious moral and material sufferings, of which the most cruel and horrible is the custom of lynching.” However, the Vietnamese military leader did conclude that they, “having learned” during World War I that “they are a force if united, are no longer allowing their kinsmen to be beaten or murdered with impunity,” citing several cases of Black veterans uniting in defense of their communities against attacks by white mobs.

The United States would give up its bellicose misadventure in Vietnam in 1975, seven years after the murder of King in Memphis, Tennessee. Guinea Bissau and Zimbabwe would gain independence five and 12 years, respectively, after his death.

By now, the civil rights movement and its seminal leader had been turned into an intractable matinee of sorts, all of which contradicted a 1978 U.S. Congressional Committee investigation which concluded that “there was a likelihood of conspiracy in the assassination of Dr. King.” In March 1997, Dexter Scott King, one of King's two sons, visited James Earl Ray, the convicted lone assassin of his father, to tell him that his family believed in his innocence.

To whom and what unlikely place shall we venture on this 50th anniversary of King's murder than back to Hanoi? It was here that General Vo Nguyen Giap, a history teacher standing 152 cm tall, would go on to lead Vietnam's People Army against the bellicose fervor of the United States, a country that, as of today, has waged war 93% of the time – 222 out of 239 Years – since its independence in 1776.

His comments marked just below their classroom grade: “The imperialists – allow me to use that word – are bad students.”