José Gabriel Condorcanqui or Tupac Amaru II, and his wife, Micaela Bastidas, led the largest uprising in colonial Spanish America. From 1780-1783, the uprising roared across the Andes, stretching from the rebel base just south of Cuzco through Charcas (Bolivia) and into what became northern Argentina and Chile. Rebels ransacked haciendas, razed the hated textile mills or obrajes, and targeted Europeans, those who were deemed pukakunkas or red necks in Quechua, the language of the Incas. 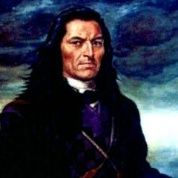 Tupac Amaru, Micaela Bastidas, and much of their inner circle were captured in April 1781 and, as described below, executed in a grisly public spectacle on May 18, 1781. But the rebellion was far from over. New leaders emerged, including Tupac Amaru's cousin and their older son, and led an even more violent rebellion to the south, around Lake Titicaca. The Spanish believed the insurgency effectively ended the uprising. They were wrong.

The following is an excerpt from the book The Tupac Amaru Rebellion (Harvard University Press, 2014).

On Friday May 18, executioners led Tupac Amaru and the other prisoners out of their cells adjoining the Plaza Mayor, guarded by heavily armed members of the mulatto and Huamanga militias. One observer noted that the large crowd in the Plaza remained quiet and included no Indians, “at least in their typical dress; if there were any they were disguised in capes and ponchos.” Perhaps Indians found the ceremony too excruciating to watch or worried that the crowd could become violent and attack them. Workers had erected gallows, at this point guarded by armed mulattoes. Dressed in canvas sacks used to bring yerba mate from Paraguay, their hands and feet tied tight, the prisoners were dragged behind horses, their skin scraping on the cobblestone streets. A town crier declared, “This is the justice that in the name of the King, our Lord, don José Antonio de Areche imposes…. He who does it, pays for it (quien tal hace; que tal pague).” Diego Verdejo, Antonio Oblitas (the black servant who had participated in the hanging of Areche and possibly drew a portrait of Tupac Amaru), Micaela’s brother Antonio Bastidas, and Antonio Castelo were the first victims. They were hanged, their bodies dumped below the gallows. Francisco Tupac Amaru (José Gabriel’s uncle) and Hipólito (Tupac Amaru and Micaela Bastidas’s elder son) had their tongues severed before they were hanged. Soldiers forced Micaela and José Gabriel to watch. Tomasa Tito Condemayta, at one point called Tupac Amaru’s “favorite,” was taken to a low chair in front of the gallows. The executioner attached an iron band to her neck, a garrote, and tightened it with a crank until she asphyxiated in excruciating fashion. The metal garrote was a novelty in Cuzco: “it was made for the occasion and we had never seen one here.” She was then hanged, to confirm her death.

Micaela was then led to the gallows. Executioners slashed her tongue—some claim that she would not open her mouth and only after her death was it cut. They then strapped her into the garrote. According to one account, her neck was too thin for the garrote to work so the executioners instead strangled her with a rope and kicked her until her death. While historians disagree about the execution technique, everyone agrees that it was agony. José Gabriel was forced to watch. Executioners then led him to the gallows and cut his tongue. They tied his limbs to four horses in order for him to be quartered, “a spectacle never seen before in this city.” The horses pushed towards the plaza’s four corners but Tupac Amaru’s arms and legs did not separate from his torso. Frustrated, Areche ordered him beheaded. His youngest son, Fernando, screamed as his witnessed his father’s agony. In the words of the English geographer and traveler Clements Markham, who visited Peru numerous times in the mid-nineteenth century, Fernando “uttered a heart rending shriek, the knell of which continued to ring in the ears of those who heard it to their dying day. It was the death knell of Spanish rule in South America.” Even the most hardened royalist must have shuddered at this scene. The boy was made to pass by the gallows and gaze at the bloody, severed cadaver. His age saved him from the death sentence—he was ten. One witness described a sudden gust of wind and a downpour that made people take cover when Tupac Amaru expired. The observer continued, “this is why Indians say that heaven and the elements felt the death of the Inca who the inhuman and impious Spaniards were killing with such cruelty.”

The executioners detached the heads and limbs from all of the dead. They burned José Gabriel and Micaela’s torsos in a bonfire on the Picchu hill and dumped the ashes into the Huatanay River. Areche had precise plans how to distribute the body parts, using them as grisly warning about the danger of sedition. Tungasuca received an arm from Tupac Amaru and one from Micaela as well as Hipólito Tupac Amaru’s head, Tinta Tupac Amaru’s head, Pampamarca an arm from Antonio Bastidas, Surimana an arm from Castelo, while the other one was sent to Pampamarca.

Charles Walker is Professor of History and Director of the Hemispheric Institute on the Americas. His previous books include Smoldering Ashes: Cuzco and the Creation of Republican Peru and Shaky Colonialism: The 1746 Earthquake-Tsunami in Lima, Peru and its Long Aftermath. Harvard University Press published The Tupac Amaru Rebellion in 2014. It is available here. For more information about Tupac Amaru, Peru, and much else, you can visit charlesfwalker.com