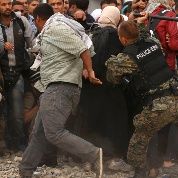 In August, Venezuela began a crackdown on criminal activities on its border with Colombia, where paramilitaries and goods smugglers have long undermined the country's domestic security and economy. The crackdown was widely condemned in the international media and numerous government organizations. While private media outlets depicted the Venezuelan crackdown as anti-Colombian, the European Union issued a statement claiming Venezuela's actions put “at risk the overall humanitarian situation, security and stability in the bordering region.”

“Further escalation must be avoided. Mutually acceptable solutions should be found in full respect of human rights and to ensure the well being of the local population,” said the EU External Action Service in a statement.

Europe is loathe to even accept refugees from its own wars, yet it is held up as a model for human rights.

Ironically, the statement was issued as EU member states were undertaking their own border crackdowns, but not against criminals like paramilitaries and smugglers. Instead, countries like the U.K., Hungary and others were busy shutting their borders to an influx of migrants and refugees, including thousands of people displaced by Western-sponsored wars in countries like Iraq, Afghanistan and Syria.

The contrast couldn't be more stark: Venezuela, a country that has long welcomed Colombian refugees was condemned for cracking down on criminals, while it continued to welcome refugees in the thousands. Europe, by comparison, is loathe to even accept refugees from its own wars. Yet Venezuela is depicted as the villain, while the EU is held up as a model for human rights. So much so, that in 2012 the EU as an entity received the Nobel Peace Prize.

Meanwhile, Venezuela's decades-old tradition of welcoming Colombian migrants continues to go noticed. Colombians displaced by their country's civil war have long viewed Venezuela as a safe haven, and Venezuelans have always viewed Colombians as sisters and brothers. So much so, that in 2004 then president Hugo Chavez offered Colombian migrants the right to vote, and a clear path to residency. Colombians in Venezuela freely enjoy the benefits of the government's social missions, which offer free education and healthcare, along with heavily subsidized food and housing. Refugees in many parts of Europe all too often face extended periods of detention, and on the streets encounter anti-migrant sentiment from a resurgent far-right.

Perhaps it's time for us to reassess who deserves that Nobel Peace Prize.

RELATED: How Europe Created Its Own Refugee Crisis