Parliament Street in New Delhi, the capital city of India, erupted in jubilant celebrations after the country's supreme court legalized homosexuality in the country, and struck down a colonial-era law that has for years been condemned by LGBTQ activists and organizations. 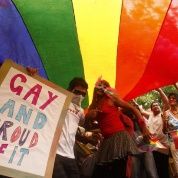 This Victorian-era law brought untold sufferings to many in the LGBTQ community in India. “Section 377 was always a peripheral threat to me," Mahika Banerjee, a media and communications person and an activist told teleSUR in comments about the judgment.

"In a few cases where I have been sexually harassed and stated that I would take action against it, my harasser(s) would threaten to press charges against me filed under Section 377. While that is not legally applicable, I did not want the police knowing that I was interested in women. Consequently, I would be frequently deterred from pressing charges against my attackers.”

Hence, the 493 page judgment was welcomed with open arms by the community along with the U.N. secretary-general and various international rights groups.

For Jitender Bharadwaj, a student and activist from New Delhi, India, “the judgement is something which had been long awaited, from (the organization) AIDS Bhedbhav Virodhi Andolan in 1994 to Ramchandra Siras’, a professor in Aligarh Muslim University of India, suicide in 2010, after getting suspended from his job for engaging in same-sex encounter, to transwoman Tara's murder at the hands of police officials, the judgment is a relief to many who have been harassed in the name of this law.

“Apart from the jargon of natural vs unnatural and culture vs modern, the IPC section has been a weapon to harass people who don't conform with the traditional binary of sexuality and gender. Therefore, the judgment is a step to remove inequality. Though now the question is hovering around civil partnership, sexual harassment at work and domestic space, sexual assaults in public spaces, discrimination etc., it is a step towards a larger issue.”

Aditya Raj, an artist, and activist from India, said the decision in fact came as a surprise as activists had started becoming less hopeful about changing the law after a 2013 judgment dismissing a review and a revision of the law.

“The judges have gone above and beyond to talk about mental health, privacy, dignity, the right to self-determination, transgender rights. Justice Indu Malhotra even goes to the extent (of saying) that they owe an apology to queer people for all the struggles we have had to go through. So all in all, a great judgment”

While it's a great moment in their struggle for equality and civil rights, the fight is far from over. For Mahika Banerjee, legalizing 377 is “the mere tip of the iceberg and the queer and non-binary community in India has a much larger struggle ahead of them. That being said, I am celebrating this judgment as it is a much-needed start.”

But Mahika does not consider this judgment to be a '"historic judgment’ as there has been a back and forth process of criminalization and decriminalization in the past decade. 377 is not just based on our right to have sex; it's also a basis for our identities. It also entails our right to privacy and dignity. These fundamental aspects as to what shapes us as individuals and our relationship with a very violent state should not be subject to this incessant legal tug of war.”

History of the Movement in India:

The legal tug of war mentioned by Banerjee can be traced back to the early 1990s. In the post-independence era, the LGBTQ community has faced numerous setbacks in their struggle to have the same rights as heterosexual couples.

If one traces the trajectory of the movement, the first known protest for gay rights was held on Aug. 11, 1992, 45 years after India gained independence from British colonialism. An organization called AIDS Bhedbhav Virodhi Andolan (ABVA) organized the gathering in front of Delhi police headquarters to protest against the rounding up of men from Connaught Place's Central Park on charges of homosexuality. The protest didn’t see any desired outcome.

Two years later in 1994, ABVA activists filed a public interest litigation (PIL) in Delhi High Court challenging the constitutionality of Section 377. This PIL was the first legal protest and the first attempt to legalize homosexuality in India. In 1991, ABVA published a report titled ‘Less than Gay’, a citizen´s report on the discrimination faced by the community in India.

The PIL provided India with its first champion of gay rights, Siddhartha Gautam, a co-founder of ABVA. However, post-Gautam’s early and sudden demise, ABVA failed to follow through on the petition and the case was dismissed in 2001.

In 1999, Kolkata, a city in West Bengal, held India’s first ever Gay Pride Parade. The parade, with only 15 attendees, was called Calcutta Rainbow Pride and sent an overdue message to the whole country i.e., being queer and being proud. The same year, a Delhi-based organization called CALERI (Campaign for Lesbian Rights) released a manifesto titled ‘Lesbian Emergence’ which sought to break the silence around the lives of queer women, who according to CALERI, were much more invisible than queer men.

In July 2001, enthusiastic about enforcing Section 377, Lucknow police raided a park and arrested a few men on grounds of suspected homosexuality, reigniting debate about the issue again. The police also raided Bharosa, an NGO working on health issues, seized their documents, and arrested nine more people. They were charged with sex racketing and denied bail. Finally, after a month, the Lawyers Collective, a legal aid organization fighting for gay rights, established that the NGO was not involved in a sex racket and bailed out the arrested members.

After the Lucknow incident, the NGO Naz Foundation and the Lawyers Collective filed another petition to the Delhi High Court in 2001 against the law which then brought a desired, overdue but short-lived verdict on July 2, 2009, decriminalizing homosexuality.

The community, after a long battle, was only just letting out a sigh of relief when the Supreme Court of India decided to overturn the judgment within the short span of two years. In what came to be known as Suresh Kumar Koushal vs Naz Foundation, a bench of Justice GS Singhvi and Justice SJ Mukhopadhaya scrapped the Delhi High Court verdict.

Eight years of hard battle by the Naz Foundation and the Lawyers Collective were finally dismissed by the apex court on Dec. 11, 2013, citing that Section 377 did not suffer from the vice of unconstitutionality and that the declaration made by the Delhi High court was legally unsustainable.

Homosexuals were considered criminals after the 2013 Supreme Court judgement and witnessed an upsurge of activism in India. Many of the present Indian activists consider the post-2013 period as an important phase in the history of the LGBTQ movement in India.

“I have not been quite active in the radical movement pre-2013 year (the era of Kaushal Judgement) but since 2014 I have been active in queer issues, that's the post-traumatic syndrome of horrible Kaushal Judgement when we were declared criminal. I started engaging more with the activists,” said Bharadwaj.

In 2015, Shashi Tharoor, a parliamentarian and opposition party lawmaker prepared a private bill to amend Section 377 but it was clamped down before it could be presented in Lok Sabha, the lower house of Indian Parliament.

Since the overturning of the 2009 judgment, several petitions have been filed challenging the order. As India witnessed increasing protests against Section 377, several high-profile names including Ritu Dalmia and hotelier Keshav Suri, also filed petitions against the draconian law which a few years later brought about today's ruling: “The right to live with dignity has been recognized. Sexual orientation is a natural phenomenon determined by biology and science. Any discrimination on this basis is unconstitutional.”

However, speculation remains about whether the judgment would indeed bring any desired changes in society.

Raj is hopeful that things might change saying, “at least people don’t have to be scared of legal consequences, but of course, the mentality of people would take more than a judgment to change. But yes, homosexuality being illegal was always in people's head. When I came out to my dad, the first thing he said was that people go to jail for it. So hopefully this will at least help us counter that. This is just the first step and of course a welcome step but there is so much more to do.”

Bharadwaj thinks that social change has very little to do with law as “law and social both are in different silos.” The judgment has made a way to raise awareness and people are encouraged to engage with the issue more openly but overall change will take time.

Similar sentiments were expressed by Banerjee for whom the struggles are, “enmeshed with sexual harassment, how we shape our identities, freedom of speech and expression, right to assertion and dissent and, of course, inevitable discrimination. Our struggles need to be intersectional and battle communal violence as well. The queer community needs to look inward and reflect on our own privileges and how they can affect those who do not share the same privileges. We need to acknowledge and accommodate positionalities based on class, caste, gender, sex, sexual orientation, education, region, language, religion, tribe, race, and ability.”

Bharadwaj also mentioned that the whole movement needs to be intersectional and that sexual politics in India has ignored the role of caste system for long.

The right-wing opposition in India's government against the LGBTQ community is also a matter of concern for them, and rightly so. While most of India’s leading politicians, actors, and public figures accepted and applauded the judgement, BJP, the ruling party of India and its affiliated organizations openly opposed it after maintaining silence for two days.

However, the LGTBQ community is not dialing down their celebration despite the opposition. They are preparing themselves for the larger struggle ahead since the road to complete acceptance and living with dignity is long and byzantine.