March 8 is International Women’s day, dedicated to celebrating the progress that has been made around the world for women. 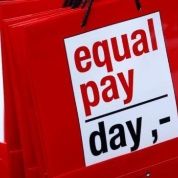 While many of the barriers for women in the United States were overcome in the 1960s, since when women have held many high-level positions typically held by men, such as Supreme Court justices, generals of the armed forces or even astronauts, this progress may be regressing.

A recent analysis from the Institute for Women’s Policy Research shows that the wage gap actually widened in 2015. The study found that women’s weekly earnings for full time work were US$726 compared to US$895 for men.

teleSUR spoke with Jessica Milli, study director at IWPR, about the gap.

“In terms of the wage gap actually widening, the main reason behind that was that while both men and women’s weekly earnings for full time work increased over the past year,” she said, adding, “men’s earnings actually increased more, which contributed to that widening of the gap.”

A lot of progress was made during the 1980s and 1990s in terms of narrowing the gap; according to weekly earnings data, the weekly gender earnings rose from 64 percent to 81 percent.

Milli told teleSUR that if the pace of change in annual weekly earning were to remain the same it would take until 2059 to completely close the wage gap and attain equal pay for women.

Beyond this there are a number of factors that contribute to a widening of the gap, one the main ones being occupational segregation.

Occupational segregation refers to occupations that have not fully integrated and are typically dominated by either males or females. Much of the pay difference that is seen today occurs because there are still male-dominated fields that are seen as inhospitable to women or unfriendly to women’s needs.

The reality is that although much progress has been in fairer distribution of household responsibilities, women still carry out a larger portion of these responsibilities and some workplace standards hinder the woman’s ability to maintain certain positions.

The United States continues to be the only industrialized nation that does not offer paid family leave for its employees, a factor which promotes the widening of the gap.

“One thing is family friendly workplace policies and particularly policies that are more gender neutral and promote men taking more responsibility with the household so things like paid parental leave for example could be a huge help,” Milli said.

“The U.S. is the only industrialized country in the world that does not have required paid leave for new mothers and fathers and so what happens is that someone has to stay home and it’s pretty much always the woman,” she added.

Within the gender wage gap there are also variables that affect how wide or narrow the gap is, among these the type of jobs or the salary range in question.

Race is another factor that affects how wide or narrow the gap is, women of color earn less than men in the same group and also less than white men.

Numbers however cannot explain variables such as gender discrimination which research shows is also a playing factor. Often biases are held against women and their abilities to perform job duties which leads to a “justification” for lower wages.

As part of the 2016 presidential campaign, Democratic candidates have brought up the topic of equal pay for women making it one of the main issues in their campaigns but with the current estimates.

Milli told teleSUR it would be difficult for the next administration to actually reach this goal. She did add that with more legislative action the prospects could change the dynamics.