The New York Times published an editorial Monday gloating about the alleged demise of the “left” in Latin America. 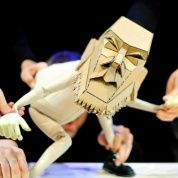 The editorial lamented the loss of influence of Washington over the region but expressed hope that with the recent electoral setback in a few countries, U.S. elites could reclaim their dominance over the hemisphere.

“The shifting political landscape has opened the door for a new generation of leaders to chart a different course for Latin America. That offers the United States an opportunity to jump-start its relationship with several neighbors that have historically regarded Washington as neglectful, imperial — or both.,” read the Times editorial.

But in order to sink their claws back into Latin America, U.S. elites need the help of domestic leaders to do their bidding.

Here are the five biggest puppets of the United States in Latin America.

Mexican President Enrique Peña Nieto has faithfully and dutifully fulfilled the wishes of the United States elites, implanting a series of neoliberal reforms, such as opening up the country's oil sector to transnational companies.

RELATED:
Pemex No Longer to Be Main Producer of Oil in Mexico

Peña Nieto's government has not been afraid to resort to repression and disappearances in order to implement its agenda.

The Mexican security forces has been implicated in a number of human rights violations, including the forced disappearance of 43 students from the Ayotzinapa teachers' training school, which drew widespread condemnation.

The situation seems to be only worsening, recent reforms passed by the Mexican Senate allowing the military to spy on and raid the homes of private citizens, a move that has been called serious step backwards for human rights.

Peña Nieto's stained record did not stop the Obama White House from inviting the Mexican president to Washington in early 2015, showing once again that U.S. economic interests trump human rights.

A man holds up an image depicting Argentina's President Mauricio Macri, with the U.S. national flag painted on his forehead. | Photo: Reuters

After over a decade of leftist rule, Argentines voted in a right-wing administration led by Mauricio Macri that has presided over a massive rollback in social gains.

It is no coincidence that the Macri government is one of those praised by the New York Times editorial board.

More than 154,000 workers have been fired or suspended since President Mauricio Macri took office in December 2015 and unemployment is now seen as the number one worry for Argentines.

The Macri government announced its intention to re-establish bilateral defense relations between the two countries after a freeze in military ties in recent years.

Military cooperation with the U.S. is a sensitive topic in Argentina, as the military dictatorship there was shown to have initiated links with U.S. intelligence and security.

In many ways, Macri is the battering ram for U.S. interests in the region. One of Macri's first moves, before even taking the oath of office, was to call for sanctions against Venezuela.

The unelected government of Michel Temer in Brazil, imposed after the country's Congress ousted President Dilma Rousseff, was also praised by the New York Times for being “open to expanding cooperation with the United States.”

Temer may very well be forced to work more closely with the United States as his government has become increasingly isolated in South America, with only Macri openly expressing support for his government.

Washington is working diligently to create a right-wing bloc in the region, which is why the first trip by the coup government's foreign minister was to Argentina.

Together, Brazil and Argentina would like to restore South America's Mercosur bloc to its original purpose as a neoliberal bludgeon.

Colombian President Juan Manuel Santos has won praise for his efforts to negotiate an end to his country's five-decade-long armed conflict. The U.S. Department of State has been an active part of negotiations as a result of years of direct military interference in Colombia.

Whereas Colombia's South American neighbors are motivated to support to peace process out of an interest to see the region truly become a “zone of peace,” the United States wants to see peace for entirely different reasons.

Colombia is a resource-rich country, and transnational mining and hydrocarbon companies are eager to gain access, which wasn't possible as long as the armed conflict raged on.

Santos knows this and although land reform was a major part of peace negotiations, he made sure the promises made to the rebels did not go too far as to threaten U.S. interests.

Though it often is ignored by most media outlet, Paraguay occupies an important role in regional politics, a fact not lost on the United States government.

In 2008, Paraguay joined many of its neighbors in electing a leftist and anti-imperialist president in Fernando Lugo.

This of course did not sit well with elites who immediately began conspiring to secure his ouster. Sure enough, in June 2012 Lugo was ousted through a parliamentary coup not alike the one that just took place in Brazil.

RELATED:
Current US Ambassador to Brazil Served in Paraguay Prior to 2012 Coup

The coup in Paraguay is now seen as a test run for a similar plot against its much larger neighbor Brazil. In fact, the present U.S. Ambassador to Brazil Liliana Ayalde previously served as ambassador to Paraguay in the lead up to the 2012 coup.

Lugo was eventually replaced by President Horacio Cartes, a man who faithfully follows the edicts from Washington and has provoked the ire of the country's workers peasants, and students.