India is all set for its election on April 11. The country’s election is regarded as the world’s biggest one this year with 900 million citizens, an eighth of the world’s population registered to vote and choose the next prime minister who will hold office for the next five years. 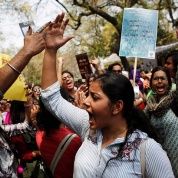 Key Things to Know About World’s Biggest Elections in India

After being ruled by the far-right Prime Minister Narendra Modi’s Bharatiya Janta Party (BJP), many sections of the Indian society are seeking a change. Even though Modi’s support base remains strong, if not escalated after Pulwama attack in Indian Occupied Kashmir which claimed lives of 40 Indian armed personnel, progressives are hoping and fighting for a change.

From authors to scientists to theatre artists to visual artists all coming together, penning open letters to their fellow countrypeople urging them to vote against Modi’s politics of hate and fear.

In a country-wide protest, Indian ciswomen, transwomen, and queer people took to the streets on April 4 demonstrating against the current administration.

But why such outrage?

Since the BJP came to power, hate crimes against Muslims are being carried out with impunity. One of the first cases that shook the nation was the murder of Mohammad Akhlaq near the capital city Delhi in 2015 on the suspicion of storing beef.

The meat was taken to the lab after Akhlaq’s death and proved to be goat meat. Shaukat Ali became the latest victims of a fanatic right-wing mob Sunday when he was hackled for selling beef in the north-eastern state of Assam and then allegedly made to consume pork which is considered haram (illegal) in Islam.

From Akhlaq to Shaukat Ali, countless Muslims gave were lynched, abused, threatened in a country they were supposed to call their own.

The perpetrators are often applauded by the local BJP leaders while the prime minister always maintained his silence.

For example, in 2017, Shambhu Lal Regar, a man in the northern state of Rajasthan, hacked a Muslim worker Mohammad Afrazul and later burnt him alive while his nephew recorded the whole incident and later uploaded on social media. He was later garlanded by a BJP leader in the state and currently, Regar is contesting for the 2019 elections from a constituency in north India.

The right-wing supporters are not afraid of murdering mainly because of Modi and his government’s anti-Muslim politics. They have always maintained that India is a land of Hindus and their politics are guided by Hindutva ideology i.e. Hindu nationalism.

Coupled with Hindutva ideology, the country’s justice system, controlled by the government, completely failed to provide any support or relief to the victim’s family which emboldened mob mentality against the Muslim minority.

Aditya Pandey, a Ph.D. scholar told teleSUR, “One argument which is true and significant is that tolerance and democratic values were hardly strong in our country. But the dissatisfaction or anger against the government is founded on the way those who don't believe in democracy or tolerance have received divine protection or free hand by the Indian state as their ideology has parity with the ruling party. So, we are actually witnessing the takeover of Constitutional State by the Ideological State of the ruling party.”

The BJP is a party that prides itself on its “nationalism” and very vocal anti-Pakistan rhetorics.

Historically, however, it’s parent organization Rashtriya Swayamsevak Sangh (RSS) which works as the ideological apparatus of BJP, was not so ultra-nationalistic in its approach.

RSS was formed in 1925 and since then “the RSS only tried to disrupt the great anti-imperialist struggle of the Indian people against the British colonial rulers,” Shamsul Islam wrote in the book “Religion, Power, and Violence: Expression of Politics in Contemporary Times” adding that the RSS was never a part of the anti-colonial struggle. In fact, two leaders that RSS were proud of, Veer Savarkar and K.B. Hedgewar were subservient to the British colonial rule.

When Gandhi started Quit India movement in 1940, RSS promised the colonial home government to send their cadres to join the colonial civic guards.

Currently, apart from Islamophobia, the RSS-BJP uses anti-Pakistani rhetoric to lure voters and a population reeling from the colonial hangover, who are attracted to this policy like honey attracts bees.

In February, an attack on the Indian central reserve police forces, killing 40 Indian personnel, has given way to an increase in nationalistic rhetorics where critics warn that anyone who speaks against war is labeled anti-national which has evolved into the narrative that anybody who speaks against Modi is unpatriotic under the current political scene.

Suppression has always been part of life for Kashmiris but 2018 was the bloodiest year in a decade as 250 militants, 144 civilians and 86 army personnel were killed.

After the 2019 attack, repression has increased along with regular abuse of Kashmiris.

“Till now whatever government has come to power did not make any difference to the politics of Kashmir. But this elections is different because the BJP, the right-wing Hindu majoritarian party in the center has made it clear that they would want to do away with Article 370 and Article 35A which blocks Indians from owning property and settling in Kashmir. So this has become an issue of settlement. Therefore these elections are different,” Qazi Zaid, editor of local media Free Press Kashmir told teleSUR.

According to Zaid, traditionally the local parties would have manifestos based on development or everyday governance. However, “right now the pitch of the local parties has changed. They are pitching that they will safeguard the special status. In other words, it translates as they will safeguard the disputed status of Kashmir since if the law is removed, it will lead to demographic changes which lead to change in a possible solution of plebiscite or referendum. Hence, the election has a different dynamics,” said Zaid.

From killing authors to rationalists to jailing activists, abusing lower caste and Indigenous people, the country has witnessed all in the past five years.

Ciswomen, trans people, queers all have come under attack from the government.

“The present ruling party representing the ultra-right wing which has brought together the most aggressive crony capitalism and exclusivist Hindutva which is aiming to replace the existing, democratic secular Indian republic with a fascistic Hindu Rashtra (country),” India’s biggest leftist party the Communist Party of India (Marxist), or CPI(M), said in an emailed statement to teleSUR.

It added that to the party and its leaders, the BJP has brought out, “extremely aggressive pursuit of the neo-liberal policies, communal and identity-based polarization of people, a major authoritarian onslaught on democratic rights and independent institutions and the subordination of the foreign policy to imperialist and Zionist forces.”

The “soul and idea of India” is at stake, the CPI(M) concluded.

Such sentiment is echoed by many progressive and leftists in India. Umar Khalid, a leftist student leader told teleSUR last October, that “even the assassinations of different progressive writers like Narendra Dabholkar, a rationalist from Maharashtra; the communist leader comrade Govind Pansare; Prof. Kalburgi in Karnataka; and a prominent journalist like Gauri Lankesh from Karnataka last year, the attempt to silence voices of dissent and rationality had the opposite effect. More voices have emerged.”

Khalid added that “at a time when there was no formal opposition inside the parliament because the opposition party did not have the required number of seats to be qualified as an opposition, it was the students and youth of the country that became the opposition on the streets.”

But the field of opposition has expanded with progressives from every walk of life fighting to restore the idea of a “socialist secular democratic republic” of India as enshrined in the constitution.