“We apologize but due to Ebola virus we are not accepting Africans at the moment,” said a sign in a South Korean pub that was photographed and went viral (image above). 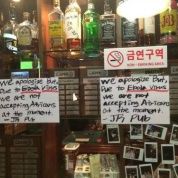 The sign is symptomatic of the fear (despite logic and science) and racism generated by much of the mainstream’s coverage on the most recent Ebola outbreak.

The symptoms – fear, misunderstanding, and devaluing

The fear began in April, when the Italian health ministry released a statement, following the confirmation of an official Ebola outbrake in Guinea in March. The Italian ministry declared "the activation of appropriate measures of surveillance at all international access points to Italy." Guinea is on the west coast of Africa, toward the center of the content, and no where near Libya, on the Mediterranean coast, where many of Italy’s undocumented migrants come from. Further, migrants coming from “at risk” countries would have left their countries before the declared outbreak.

Since then, for example, the Facebook page of the Italian rightwing group Catena Umana has called for “closing all borders.” The Daily Beast reported that some schools in Italy have sent out warnings that any students of African origin would be required to have additional health certificates prior to starting school, though no requests were made of white children who may have been to Africa on summer vacations.

There are also reports that when a black woman collapsed at a meeting in Berlin this week, German police dispatched 60 police and firefighters and locked down the building. The woman, it turned out, had not been to any of the African countries where Ebola has been reported.

Likewise, In Brussels, an African man with a nosebleed was reportedly whisked out of a shopping mall in late July, and the store he was in was sterilized, before he tested negative for the virus.

In the United States, Republican congressperson Phil Gingrey stated that “illegal migrants carrying deadly diseases such as swine flu, dengue fever, Ebola virus, and tuberculosis” are posing a threat to the United States. In Boston, an article headlined “What if there was an Ebola case in Boston” and health authorites have stated it is “better to be prepared.” Donald Trump has also weighed into the hysteria, Tweeting

So many people are agreeing with me on not creating a "highway" for Ebola to the U.S. Started in small area of Africa and now spreading fast

Our government now imports illegal immigrants and deadly diseases. Our leaders are inept.

When Kent Brantly, the U.S. citizen who contracted Ebola in Libera, returned to the United States for treatment, press helicopters followed his ride to the hospital from above, their riveting coverage ending in the anti-climax of the doctor simply walking into the backdoor of the hospital. Headlines such as “Ebola Patient Dr Kent Brantly Has Arrived in United States” have followed the minute details of the doctor’s every move.

The top U.S. media articles on Ebola are still about Brantly and Nancy Writebol — another U.S. missionary who also contracted Ebola — and how they are now “thrilled to be alive.” In multiple news stories today, the media tells us what cured them, that they have left the hospital, that they pose no public risk, that “God saved” Brantly’s life, and so on. The two are heroes, while those battling the illness (both directly, and the doctors and nurses fighting to save peoples lives) in Liberia, Guinea, and Nigeria, are not, apparently.

Though 1350 people have so far died from the virus, two lives are more important: 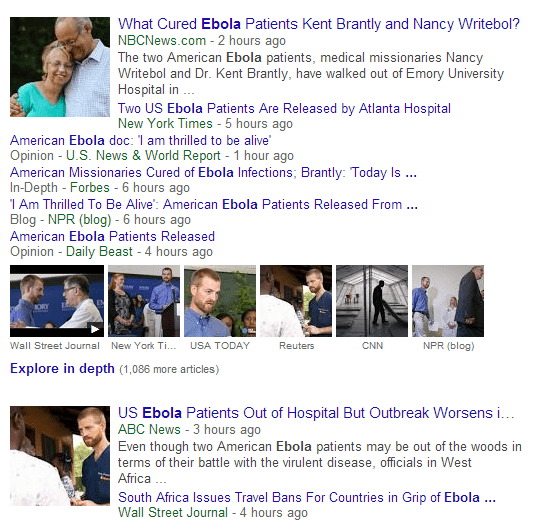 You have to click over to page 3 of Google’s compilation of news articles to find one piece about the situation in the African countries. On page 5, there are a few more. Even those articles, however, focus on “clashes,” “riots,” “fear,” “deterioration” and  “no end in sight.”

Coverage has been problematic in two key ways: It has suggested that some lives — U.S. lives, first world lives, white people’s lives — are worth more than others. It has also ignored all context and causal analysis of the increasing death toll and the slow spread of Ebola. By doing that, the media thereby reinforces the other generalized, racist myth, that problems in the continent of Africa are 1) general to the whole continent, rather than each country and region having its own dynamics and long history; 2) caused by the “victims” themselves, and not by other forces, such as imperialist legacy, an unequal economic system, policy pressure exerted by certain powerful first world countries, and so on.

Such discourse is part of upside-down health and medicine priorities, where global spending on developing basic medicines for curable diseases is not a priority  compared to plastic surgery, for example. As The New York Times noted, “Many drug companies have little interest in devising treatments or vaccines for Ebola because the potential for profit is small.”