Michelle Lee Shirley sped down the highway, whizzing past traffic, as the airbags in her damaged car inflated with her erratic driving. 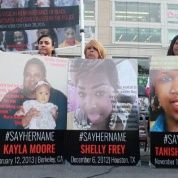 Passers-by looked on in bewilderment as several stopped to make calls to police authorities, citing a reckless driver on the streets of Torrance, California.

RELATED:
Black Women Killed by Police Violence Remembered in US​

As cops arrived on the scene, they chased Shirley for a short stretch, eventually knocking her sedan into a spin. As it came to a standstill, they surrounded the car, pointing guns straight at her, as she backed up into one occupied patrol car, then drove forward into another.

In response, several cops opened fire, blasting her car windows and killing her on the spot.

Shirley, a mother and law school graduate who suffered from bipolar disorder, would, on the first of Nov. 2016, become the latest Black woman killed at the hands of police, the 11th recorded incident just this year. In the litany of Black people murdered by law enforcement authorities, Shirley became yet another hashtag on social media, her death mourned in tweets adorned with her name.

Across the country, and a month earlier, a 5-year-old was riding his bicycle in the suburb of East Cleveland, Ohio. As he passed by a driveway in a neighborhood cul-de-sac, he was struck by what he saw: a woman, clad only in her underwear, her hands and feet wrapped curiously in white, plastic bags. She had a gunshot wound to her chest.

It was Brandi Bledsoe, the 23rd transgender woman killed in the United States this year, the deadliest year ever recorded for such violence. Of these, Brandi's was not the most brutal, or the most jarring. She wasn't famous, or powerful, and she certainly wasn't rich. But her death cast a dark and impenetrable cloud over those who loved her, and yet, cast a spotlight on the uniquely, horrific violence that menaces transgender women of color and especially Black transgender women.

“This is startling,” Elle Hearns, the Organizing Coordinator for the Black Lives Matter network and a former organizer at GetEQUAL, told teleSUR of the violence, “truly an epidemic.”

Indeed, it is this epidemic of violence against Black and brown women in the United States — both state-enacted and gender-specific — that spurred the #SayHerName movement, a call to highlight the populace that faces an apogee of tragedy for both their race and gender, an issue too often ignored.

What began as a way to spotlight gendered forms of police violence experienced disproportionately by Black women, has grown to also call attention to the staggering number of murders of transgender women.

The Beginnings of Undoing Erasure

The campaign was officially launched on May 20, 2015 when the African American Policy Forum, the Center for Intersectionality and Social Policy Studies at Columbia Law School, and over 20 other local organizations hosted #SayHerName: A Vigil in Memory of Black Women and Girls Killed by the Police at Union Square in New York City. That same month, the contingent released a brief titled, “Say Her Name: Resisting Police Brutality Against Black Women.”

RELATED:
Zumba-Thons and Other Non-Solutions to Violence Against Women

For Kimerble Crenshaw, famed feminist activist who most notably coined the term “intersectionality” in the 80s, she is still highlighting how racism and sexism both play out on Black women’s bodies decades later.

A vocal proponent of the #SayHerName movement, Crenshaw employs a telling strategy at her public events.

She probes everyone in the room to stand until they hear an unfamiliar name. She then lists off the names of unarmed Black men killed by police, such as Eric Garner, Michael Brown, Tamir Rice, Freddie Gray and Trayvon Martin.

“(At this point) virtually no one will sit down”, Crenshaw explained approvingly. “Then I say the names of Natasha McKenna, Tanisha Anderson, Michelle Cusseaux, Aura Rosser, Maya Hall. By the time I get to the third name, almost everyone has sat down. By the fifth, the only people standing are those working on our campaign.”

For educator and activist Taylor Nichole Johnson, the sentiment of erasure and invisibility is much the same.

“‘Black women are killed by the police, too.’ I can’t tell you how many times I’ve received a blank stare when I made this statement, even in activist spaces. Occasionally I’ll see a few affirmative nods, but overwhelmingly there is apathy. I leave with a sick feeling, wondering, ‘Where is the rage and protest for my sisters’ and ‘Who will fight for my life?’” she writes.

“Black women and girls, in all our complexities, have been erased from the broader narrative of police terrorism and modern-day lynching in this country,” she adds.

Indeed, a resurgent racial justice movement has sparked smoldering rage across the country as people continue to mobilize against police violence and anti-Black racism, most notably since the prolific killing of 18-year-old Michael Brown in August 2014, and under the banner of Black Lives Matter.

But the specific violence encountered by Black and brown women — transgender and otherwise — continues to be met with resounding silence.

“Black women have consistently played a leadership role in struggles against state violence — from the Underground Railroad to the anti-lynching movement to the Civil Rights and Black Power movements to the current Black Lives Matter movement — yet the forms of victimization they face at the hands of police are consistently left out of social movement demands,” it continues.

Watch Kimberle Crenshaw's TED Talk on #SayHerName and intersectionality above, and learn about the crisis facing... https://t.co/RgBMDixwdS

The All-Encompassing Enablement by Law Enforcement

And while this violence is often at the hands of police, even when it is not, “Black women are less likely to be protected by (law enforcement) when they are being murdered, beaten, or abused by their partners and community members,” the report stated.

This inaction especially applies to both victims of domestic violence, as well as transgender women.

In fact, the justice system itself is a massive barrier to curbing anti-transgender violence. Even if they are not engaged in survival behaviors that are criminalized, transgender people who report to police that they have been victimized by physical or sexual assault, face the risk of being harassed or intimidated by law enforcement.

The National Coalition of Anti-Violence Programs found that transgender people of color, including Latinos, were 6 times more likely to experience physical violence from the police than the rest of the population.

That’s why to Hearns, the solution to this epidemic is not a mere shift of resources, but a dismantling of the very systems that both ignore and perpetuate this constancy of violence.

“There needs to be a larger conversation about dismantling anti-Blackness, gendered racism and transphobia,” she explained to teleSUR. “And the systems that systematically and structurally don’t pay attention (to), or organize resources (against this violence).”