Farabundo Marti, little known outside of Latin America, but a highly regarded revolutionary leader from El Salvador, was born today 122 years ago. 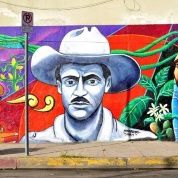 ​Almost 50 years after his death, the guerrilla-movement-turned-political-party from his home country later adopted his legacy in the name of their organization.

Marti dedicated his life to the cause of the peasants, indigenous peoples and workers of Central America. He was involved in movements in Guatemala, Nicaragua, and El Salvador, where the Marxist leader was killed by the military government for his role in a peasant uprising.

Agustin Farabundo Marti was born in Teotepeque, El Salvador on May 5, 1893. He was a student at the National University, but abandoned his studies in favor of participating directly in activities led by the nascent working class organizations in the country.

He was a member of a number leftist organizations throughout the region and a founder of the Central American Communist Party in 1925. As a result of his activities, he was regularly arrested and deported by the authoritarian regimes ruling throughout Central America.

In 1928 he found himself in Nicaragua alongside Augusto Sandino, fighting with his forces against the U.S. military occupation of the country. He returned to El Salvador two years later to launch the Salvadoran Communist Party, which would play a leading role in one of the country's most dramatic and tragic episodes.

In January of 1932, the Salvadoran people together with the Communist Party under Martis leadership rose up against the dictatorship of Maximiliano Hernandez Martinez . The regime responded with brutal repression , killing an estimated 10,000 and 40,000 people .

Marti was sentenced to death on Jan. 31, 1932 and was executed by firing squad the following day. It is reported that his cry of, “Long live socialism!” was interrupted by the impact of the bullets.

Marti's name and legacy was adopted by the Farabundo Marti National Liberation Front (FMLN), a guerrila movement that opposed the vicious U.S.-backed regimes in El Salvador throughout the 1980s and into the 90s.

Inspired by the victory of the Sandinista National Liberation Front in neighboring Nicaragua, the FMLN was founded on October 10, 1980, through the union of five existing guerrilla organizations, which had been fighting the authoritarian regime in El Salvador throughout the 1970s.

Members of the FMLN guerrilla army pose with the flag of the movement. | Photo: FMLN

The FMLN fought what they deemed a “Revolutionary People's War” against an enemy that received millions in military aid from the United States every day. In Novevmber 1989, the FMLN launched a military offensive against the capital of San Salvador and nearly succeeds in toppling the government.

The 1989 offensive served to compel the Salvadoran government to finally settle ongoing peace talks, with a peace agreement between the FMLN and the government ending the armed conflict on Jan. 16, 1992.

Later that year , the FMLN would formally covert itself into a political party . Although the party saw success at the local level , it did not win the presidency until 2009 with former journalist Mauricio Funes becoming the first candidate representing the FMLN to re ach the country's highest office .

A billboard shows the face of Mauricio Funes, presidential candidate of the FMLN, who would go on to win the election, San Salvador, El Salvador. | Photo: LGC

The election of Funes was followed by re-election of the FMLN to the presidency in 2014 with the victory of Salvador Sanchez Ceren, one of the guerrilla commanders during the armed conflict.

The triumph of Sanchez Ceren represented in many ways the culmination of Farabundo Marti's struggle for socialism and national liberation in El Salvador.