Western media might want us to believe that Russia is hardly a suitable host for the 2018 World Cup, one of the few events that bring most of the world together on the same stage. 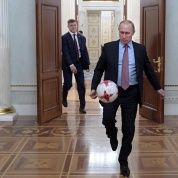 A scan of the editorial and op-ed sections of the Washington Post and New York Times reveals Cold War levels of heightened rhetoric. Just how bad have things become?

With days left before the games, U.S. Secretary of Defense Jim Mattis has been pushing the North Atlantic Defense Treaty (NATO) to implement a “30-30-30 Plan” that would see NATO's military presence in Eastern Europe bolstered several times over. The plan would require NATO to station 30 land battalions, 30 air fighter squadrons and 30 warships on alert for deployment in the areas bordering Russia. A NATO battalion is generally between 600 and 1,000 soldiers, and according to a senior NATO official is designed to deter Russia, which is specifically called an “adversary.”

Birthed in the height of the Cold War as a way of maintaining the boundaries of the Iron Curtain, military encirclement of Russia runs deep in NATO's blood. But with the former Soviet Union weakened by neoliberal “shock therapy,” NATO turned its guns to other targets, most notably the former Yugoslavia in 1999, Afghanistan from 2001 to 2014, and the destruction of Colonel Muammar Gaddafi's Libya in 2011.

Although tensions with Russia and the West began to ramp up after Russia asserted sovereignty over Crimea, resulting in the first round of sanctions, it wasn't until Russia's military entered Syria at Bashar Assad government's invitation in late 2015 that it became clear a major geopolitical shift had occurred.

With Syria's government gaining ground and scroing victories against various U.S.-backed proxies and the Islamic State Group, it was clear that the West's openly-declared goal to topple President Bashar Assad had failed.

While Russia has once again become “enemy #1” in U.S. media, military tensions between the world's two eminent nuclear powers have quietly escalated. While the danger of war has been largely absent from coverage, such a risk has become very real. Syrian President Assad recently told RT that direct conflict did nearly break out between U.S. and Russian forces, but said that “Russian wisdom” prevented this.

It's clear why Russia would be anxious to prevent such a conflict from breaking out. Although both are nuclear powers, such a conflict would not be between equals. Russia's military budget is dwarfed by that of the United States, with Washington spending roughly eight dollars on military expenditures for every dollar spent by the Kremlin. Add in NATO's additional might, and the fact that it is U.S. troops that surround Russia, and not the other way around.

What is today known as “Russiagate,” or the alleged “interference” in U.S. elections that has been used to justify heightened tensions, began in early 2016, when the private company Fusion GPS provided political opposition research for the Democratic National Convention (DNC) against Trump. Fusion GPS hired Christopher Steele, a former British intelligence agent, to dig up dirt. Steele produced 16 memos of unverified research claiming that Trump's campaign was orchestrated by top Russian officials, including claims that Vladimir Putin had orchestrated Trump's campaign. In July 2016, Steele began to work with the FBI, which opened an investigation into Trump.

RELATED:
Trump 'Did Not Like' Meeting Between Lavrov and Kim Jong Un

Another private firm associated with the Clinton campaign, Crowdstrike, claimed in July that the DNC had been hacked. When Wikileaks published documents exposing the unsavory activities of the Clinton Foundation, Russia was accused of having been behind it.

Although U.S. intelligence agencies have said they are “moderately confident” that Russia hacked the DNC, former FBI director James Comey made a stir when he said that he did not believe Russian interference had influenced the elections, and had reopened an investigation into Clinton's email servers.

With the hacking theory still unclear and unsubstantiated by concrete evidence, Facebook and U.S. Congress said in October that roughly US$100,000 in ads were purchased by a private Russian company in 2015, the majority of which were published after the election. This was widely circulated in media as proof that the Russians interfered, although the impact of US$100,000 in a campaign that spent US$81 million on social media ads is likely negligible.

Despite having little to show in the way of evidence, the theory that the Russian government conspired against the United States had a massive effect: the “scandal” dominated mainstream media in the United States; heightened tension and aggression with Russia was justified to the public, and media outlets affiliated with Russia that challenged Russiagate were deemed as “fake news,” and censored.

Journalists in the United States affiliated with Russian media network RT were ordered to register as foreign agents and stripped of their Capitol Hill media credentials in November. Sputnik was soon after banned from purchasing ads on Twitter.

The collapse of diplomatic relations between the West and Russia began with the Barack Obama administration. In the final weeks of his presidency, Obama decided to expel 25 Russian diplomatic staff from the United States, in addition to imposing sweeping sanctions. The move was justified by the unsubstantiated claims of U.S. intelligence services that Russia had hacked the DNC.

RELATED:
Bashar al Assad: 'US Is Losing In Syria, Must Get Out'

Although Putin said that Russia would consider retaliatory measures, he later decided not to respond. This was used by U.S. media to say that Putin was in cahoots with Trump.

After British spy Sergei Skripal – who had acted as a double agent in Russia's intelligence – and his daughter Yulia were poisoned in March 2018, the British government quickly accused Russia of being behind the attack before a formal investigation had been carried out.

The United Kingdom, along with the United States and several other Western allies, used the attack as justification to expel diplomats and further sour relations.

After the United Kingdom expelled 23 Russian diplomats, the United States expelled 60 Russians, including United Nations employees. The European Union expelled 35 diplomats. Russia proceeded to take retaliatory measures, expelling similar numbers of diplomats from those countries. The spat was an enormous blow to Russian-West diplomacy: some 342 diplomats were expelled in total, according to Al Jazeera.

Hitting a new low in Russia-West relations, even the World Cup's future was briefly thrown into question. “There is no indication that the tensions are going to ease; far from it,” Fifa President Gianni Infantino said in March. “They look like they'll get worse, and that puts the World Cup at risk.”