Following the Battle of Raqqa led by local Kurdish forces and Syrian Democratic Forces (SDF), heavily backed by the United States through a relentless air campaign, footage has circulated from an AP drone that shows the devastation of the once-flourishing metropolitan center. 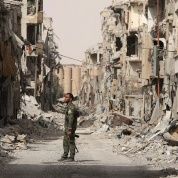 “More than 80 percent of the city (Raqqa) is estimated to be uninhabitable as a result of the fighting,” said Linda Tom, a Damascus-based official with the UN’s Office for the Coordination of Humanitarian Affairs (OCHA).

A majority of the damage to the city has come from U.S.-led coalition airstrikes that bombarded the city since the Raqqa offensive that began 4 months ago.

Hundreds of civilians died from U.S.-led coalition bombings during the operation under the leadership of U.S. President Donald Trump, who eased the rules of engagement and opened up the coalition’s targeting policy.

Attention to the bombings, which were not approved by either the Syrian government or the United Nations in accordance with customary international law, has been marginal.

While total war knows no restraint, and the destruction of property and civil infrastructure is to be expected, the scars left behind in Syria’s largest battles have been routinely politicized by analysts occupying the highest rungs of mainstream thought.

The military tactics of pro-Western military personnel are given quiet approval while the tactics of the Syrian and Russian armed forces are considered to be reprehensible war crimes, though tactics by both are essentially identical.

The Battle of Aleppo Makes Headlines

The most widely circulated instance of Syrian and Russian brutality is the Battle of Aleppo.

During the Battle of Aleppo, where the Syrian Arab Army (SAA) and Russian Air Force (RAF) battled an unpopular opposition overwhelmingly co-opted by radical elements, military intervention was called on daily by unvetted activists who found their way into primetime slots on the world’s largest television stations. Aleppo was described as a ‘hell-hole’, a ‘slaughterhouse’, the ‘Stalingrad of Syria’, and a ‘holocaust.’

Taking advantage of easy access to media spotlights, coupled with a media apparatus all too eager to give a platform to anything and everything that could undermine the ‘regime’ in Damascus, commentators who were often politically motivated activists seized headlines for weeks and trended on social media.

The administration of former U.S. President Barack Obama was chastised for not taking a hard stand in pushing back Syrian forces in Aleppo amid public outcry.

"Together with its Russian and Iranian allies, the Assad regime has relentlessly targeted women and children, doctors and rescue workers, hospitals and bakeries, aid warehouses and humanitarian convoys," wrote U.S. Senators John McCain and Lindsey Graham in a public statement.

"Aleppo will echo through history, like Srebrenica and Rwanda, as a testament to our moral failure and everlasting shame," the statement concluded.

While there can be no doubt that Aleppo was reduced to a mere fragment of itself, media outlets highlighted bombings and siege tactics as examples of the SAA and RAF’s brutality. Meanwhile, Aleppo was almost instantaneously wiped from popular consciousness following its reintegration into SAA control following a join Syrian-Russian victory, though an occasional piece will find its way into print.

Take, for example, an emotionally charged story that appeared in the New York Times Magazine that notes that “the regime of President Bashar al-Assad had just recaptured the city after years of bombing and urban warfare that had made Aleppo a global byword for savagery,” according to Robert F. Worth recounting the story of Syrians returning to Aleppo with his own contextual insertions.

“In the United States, the drawn-out siege of Aleppo — where the Syrian regime and its Russian allies repeatedly bombed hospitals and civilian areas — was widely deplored as a war crime comparable to the worst massacres of the Bosnian war during the 1990s,” Worth continues.

Historical, emotion-wrenching comparisons in Aleppo were not to spare while present-day comparisons were conveniently ignored.

Meanwhile, during the height of the Battle of Aleppo from October -December 2016, the Iraqi army, in conjunction with Kurdish Peshmerga forces and local militias, under the supervision of the U.S., launched an operation to retake Iraq’s second largest city, Mosul, from the Islamic State group.

The Battle of Mosul, titled Operation Inherent Resolve, concluded expeditiously compared to the long and drawn out Battle of Aleppo, but this victory came at tremendous cost.

With the onset of the Trump administration, the rules of military engagement changed and targeting procedures shifted. Human rights organizations documented that the coalition had removed requirements for Iraq-based military officials to recommend targets, implying that “the U.S. is now carrying out some strikes without the benefit of the strike cell’s information and targeting recommendations,” which increased the likelihood of civilian casualties.

In March, the U.S.-led coalition deployed a 500-pound bomb targeting two Islamic State group fighters on a rooftop that resulted in the collateral deaths of 200 civilians. This attack was universally condemned by human rights observers.

The U.S. timidly admitted to the airstrike in a Pentagon-issued statement that said that a coalition strike took place “at the location corresponding to allegations of civilian casualties.”

“The coalition respects human life, which is why we are assisting our Iraqi partner forces in their effort to liberate their lands from ISIS brutality,” the statement noted.

Civilian deaths were not exclusive to the Trump administration’s policies.

Veteran Irish reporter Patrick Cockburn pointed out in an op-ed published in The Independent at the beginning of the operation during the end of President Obama’s tenure that “in the case of Mosul, unlike Aleppo, the defenders are to blame for endangering civilians by using them as human shields and preventing them [from] leaving. In East Aleppo, fortunately, there are no human shields – though the UN says that half the civilian population wants to depart – but simply innocent victims of Russian savagery.”

“Destruction in Aleppo by Russian air strikes is compared to the destruction of Grozny in Chechnya sixteen years ago, but, curiously, no analogy is made with Ramadi, a city of 350,000 on the Euphrates in Iraq, that was 80 per cent destroyed by U.S.-led air strikes in 2015.”

Despite Aleppo and Mosul having been nearly identical situations, the primary difference between the two is the actors involved. In Aleppo, it was the Syrians and Russians pitted against a taxonomy of opposition groups, most of whom were (and still are) infiltrated by extremist groups, rebranded as “moderate rebels.” In Mosul, it was the uniquely benevolent U.S. and its allies leading the charge against the evil Islamic State group.

The U.S. and its allies eventually succeeded in retaking Mosul while the civilian population sustained heavily casualties. Human rights organizations noted that the coalition issued compensation to airstrike victims on only 2 occasions despite their being hundreds of victims.

The coalition set its sights on the de facto Islamic State group capital of Raqqa in June following the successful Mosul operation. Before long, observers noted the extensive cost to innocent lives that the operation was costing due its accelerated pace.

According to the New York Times, external pressure to quickly complete the Mosul and Raqqa operations led to frequent violations of international humanitarian law, citing statements by Iraqi Prime Minister Haider al-Abadi that a slow operation would help the Islamic State group recover its losses.

In August, the U.S.-led coalition launched a strike that killed 42 civilians, including 19 children and 12 women. The US Central Command (CENTCOM) responded to a request for comment by The Independent saying that "the Coalition takes all allegations of civilian casualties seriously and assesses all credible allegations of possible civilian casualties. Coalition forces work diligently and deliberately to be precise in our airstrikes.”

However, the accelerated operation continued with no changes to the coalition's rules of engagement.

Facing pressure from the Syrians and Russians in Deir Ezzor and having nowhere to go in Iraq, the Islamic State group was strained to defend its Syrian capital of Raqqa which was under siege by U.S.-backed forces and under heavy bombing by the coalition.

U.S.-backed Kurdish and SDF forces led the way in pushing the Islamic State group out of the city of Raqqa, the group’s de facto capital, in a ‘total liberation’, as was reported on Thursday.

“As we and our partners push toward the territorial defeat of ISIS, we will continue to seek to de-escalate violence across Syria. Reducing violence in Syria will allow the United States, our allies, and partners to focus even more on advancing UN-led diplomatic efforts, within the framework of UN Security Council Resolution 2254, aimed at reaching a genuine political transition that honors the will of the Syrian people,” said U.S. Secretary of State, Rex Tillerson, in a press release.

The press release did not note the UN appraisal that 80% of Raqqa had been left uninhabitable by the coalition’s airstrikes and sparring in the city. It is unclear how the U.S.-led coalition plans to provide humanitarian aid or help Syrians return to the area, though the administering of aid is in the works according to the State Department’s press release.

“The coalition's hypocrisy in Raqqa is remarkable. About 40% of Aleppo was destroyed or damaged after four and a half years of war. In Raqqa, the U.S. completely destroyed 80% of the city in four and a half months, to the point where the UN is saying that it is uninhabitable,” said Andrew Illingworth an Editor for Al-Masdar News to teleSUR, “how can you call this a liberation?”

The coalition’s activities have been marked by extraordinarily little accountability. The U.S.-led coalition has reported less than 15% of its minimum civilian casualty figures, according to projections by Airwars, a United Kingdom-based nongovernmental organization that monitors airstrikes. According to observers, the coalition has limited mechanisms for investigating civilian casualties because the coalition relies on its own members to investigate each other's actions.

As for the fate of Raqqa, the ruins of the city are now being left up to the hands of the recently assembled Raqqa civilian council as well as local forces who hope to rebuild the decimated city.

AP wrote a provocative report on the devastation that supplemented drone footage: “From Fallujah, Ramadi and Mosul in Iraq to Kobani, Manbij and Raqqa in Syria, protracted military campaigns that eventually succeeded in flushing out the militants have left behind a trail of destruction so vast that they appeared to have been undertaken with little regard for the day after.”

Syrian Democratic Forces spokesman Talal Silo called on the international community to support rebuilding efforts in a victory ceremony, which will take billions of dollars and many years to fully restore.