The Peoples' Democratic Party (HDP) made significant gains in Turkey's general election Sunday, surpassing the 10 percent threshold to enter parliament and securing 80 of 550 seats in the country’s legislature. 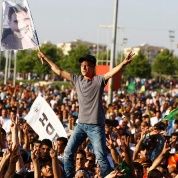 The HDP’s electoral success, which many see as a turning point in the country's political system, was partially the result of it’s new-found support from within Turkey's non-Kurdish liberal constituency. The party built on its traditional base, receiving votes from leftists and liberals, as well as tactical votes from broader bases of opponents to the ruling AKP party.

After the elections, HDP Chairman Selahattin Demirtas delivered a speech to his supporters describing the elections as a “victory of the oppressed.”

The HDP has represented the progressive Kurdish nationalist movement in Turkey, combining leftist-secularism with an alternative democratic political platform, known as democratic confederalism. The doctrine, which was elaborated by Kurdish Workers Party leader Abdullah Ocalan, calls for the installation of locally-based participatory structures, including popular people’s councils that function as micro-autonomous governments.

“We will establish democratic models of decentralization to involve all ethnic identities and to ensure their self-administration. Through regional assemblies, we will switch into a decentralized system,” the HDP’s electoral manifesto reads.

The party’s program also promises to include the creation of women and youth ministries, the lowering of the voting age to 16, the end of compulsory religious education, raising the minimum wage, and an abolishing of special courts and the National Security Council.

RELATED: Justin Podur – The Rojava Revolution and the Liberation of Kobani

The governance model espoused by HDP, which has already been applied to regions governed by the Kurdish left-wing groups in Syria’s north, successfully appealed to voters beyond the party’s traditional Kurdish constituency. The HDP’s electoral success – in spite of a bombing campaign against the leftists – marks a positive step for the integration of their proposals into national political debate, which is precisely what the party is looking to do.

Following the parliamentary gains, the HDP will have the opportunity to influence domestic policy, while also having the chance to act as voice for Turkey’s most under-represented sectors.

RELATED: Interviews from Quito - The Struggle in Kurdistan

RELATED: Does NATO's Outgoing Head Have Kurdish Skeletons in His Closet?