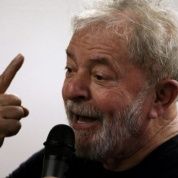 Many legal experts, both national and international, attribute his detention to insidious corporate media and lawfare. Even Pope Francis has weighed in on the matter, sending spiritual support messages to the former head of state for his accomplishments.

Lula's two terms in office were marked by a slew of social programs, lifting millions of Brazilians out of poverty and removing the country from the United Nations World Hunger Map. He left office with a record approval rating of 83 percent in 2011, according to Datafolha.

Despite the absence of Brazil's most popular politician from the campaign trail and presidential debates, the first round of voting, which begins on October 7, is on schedule. With that in mind, here are the main candidates:

Coming in at second place behind Lula is far-right congressman Jair Bolsonaro of the Social Liberal Party. He has tapped as his vice-president Antonio Hamilton Mourao, a retired military general who said last year that a military coup was possible in Brazil.

As of late, Bolsonaro has suggested that if he becomes president he will encourage distance educational programs and home-schooling in order to "combat Marxism."

But it's hard to divorce Bolsonaro's position from statements he's made since the 2016 impeachment of former President Dilma Rousseff of the Workers' Party (PT). On the occasion of that fractious vote, he used his congressional speaking time not only to rally in favor of her ouster, but also to praise Carlos Brilhante Ustra, the colonel who headed the dictatorship's notorious torture program in the 1970s.

Bolsonaro cited Ustra as "the source of Dilma Rousseff's dread," referring to the fact that, as a young woman, Rousseff had been imprisoned for three years for being a leftist guerrilla and was tortured, including being electrocuted, under his watch.

The seven-term Rio de Janeiro congressman has also been quoted as saying that Chilean dictator Augusto Pinochet "should have killed more people." During a recent interview with NPR, Bolsonaro said the dictatorship was "very good" becaues it "prevented Brazil from falling under the sway of the Soviet Union."

Other comments that have drawn ire include: "Women should earn less because they get pregnant;" that the inhabitants of Afro-Brazilian communities that resisted slavery – known as quilombos – are "not even good for breeding anymore;" and that he would be "incapable of loving a homosexual son."

Liberty and Socialism Party candidate Guilherme Boulos called out Bolsonaro during the first presidential debate, saying: "Everybody knows you are machista, racist (and) homophobic." Previously characterizing Bolsonaro as a "caricature" of U.S. President Donald Trump, he even cautioned voters that Bolsonaro "presents himself as someone who is going to combat criminality, but he himself is a criminal."

It should be noted that in a recent UOL poll, Bolsonaro appears not in second but in first place because Lula's name is absent from the ballot. However, the presidential field broadens after the two top runners.

Boulos, appearing with single-digit support months ago, has found it difficult to break the one percent barrier in terms of voting intention. He's the national coordinator of the Homeless Workers' Movement and supports both Lula's release from prison and Lula's presidential candidacy.

"Good night to President Lula, who should be here, but is unduly in jail in Curitiba while (Senate-imposed President Michel) Temer is free in Brasilia," Boulos said during the first presidential debate.

Former Finance Minister Henrique Meirelles, running for the Brazilian Democratic Movement, also took aim at Bolsonaro's brash style, saying: "Jobs cannot be created by screaming," according to the Washington Post. He fluctuates in single-digits in terms of voting intention.

So does Alvaro Dias of the Podemos (PODE) party. He also criticized Bolsonaro's stance towards women, reminding voters that Bolsonaro once said women should be paid less than men because they "get pregnant."

From a leftist perspective, the most pressing issues include undoing austerity measures, which include a 20-year freeze on public spending, privatization of public companies and labor deform, all enacted on Temer's watch. Another pressing issue is security.

For the second year in a row, the number of murders in Brazil has broken records: a total of 63,880 people were killed in 2017, a three percent increase from the previous year.

Averaging 175 homicides per day, or 7.2 every hour, the murder rate is equivalent to that of a country engulfed in war, according to the Brazilian Forum of Public Security. The 2017 murder rate had also reached new heights, up from 29.9 to 30.8 deaths per 100,000 per people.

"The manner in which the country opts to address public security generates many victims," said sociologist Renato Sergio de Lima, president of the forum. "When you elect confrontation, the results are devastating. The numbers show we have a serious problem with lethal violence."

The overwhelming majority of victims were young Black men, de Lima said, attributing the rise in murders to organized crime.

More militarization and policing forms the bulwark of the right-wing's strategy for dealing with Brazil's security issues, but such a strategy flies in the face of evidence from the six-month military intervention in the state of Rio de Janeiro.

The 'Aimlessly: No Program, No Results, No Direction' report, published by the Intervention Observatory at Candido Mendes University, revealed that massacres in Rio de Janeiro state doubled and the number of shootouts significantly increased since the military intervention was launched on February 16.

Silvia Ramos, coordinator at the Intervention Observatory, said the intervention was a political decision "that spawned new problems with the presence of soldiers in the political life of Brazilians, who were hurled into the center of a scenery without solving the problem of insecurity in Rio."

Running shootouts; stripping of labor rights; privatizing of public firms, and a plethora of policies plunging Brazil into free-fall regression since the PT presidencies of Lula and Dilma have not derailed this year's presidential campaign. The majority of voters have redoubled their support for the elections, albeit in favor of a candidate they can't vote for: Lula.

If Lula is kept in prison and prevented from running, his party – the PT – says Lula will throw his weight behind former Sao Paulo Mayor Fernando Haddad as its presidential candidate.

The strategy is already showing results: an XP Invetimentos/Ipespe survey conducted between August 6 and 8 shows Haddad in second place with 13 percent, eight percentage points behind Bolsonaro's 21 percent, if Lula parlays his political clout.

Hope among Lula's supporters has not dwindled, despite the political skulduggery sweeping the land: he has yet to pass the baton to Haddad, and mass mobilization calling for Lula's release is already underway.

The seeds of his mass popularity began to sprout back in 1968, during the military dictatorship, when Lula joined the Sao Bernardo Metal Workers Union, an organization he considered so "boring" that he preferred staying at home and watching soap operas.

Elected president of the union in 1975, Lula advocated for workers' rights, organized mass strikes and sought to improve communication within their ranks.

RELATED:
Brazil: Who Is Judge Sergio Moro? Lula's Jailer With No Proof

Having experienced drought, famine, plagues and abject poverty during his childhood in Brazil's northeastern state of Pernambuco, Lula has never forgotten his humble beginnings, or working as a shoeshine boy in 1953.