News last December that the United States and Cuba would work to restore diplomatic relations took the world by surprise. In effect, U.S. President Barack Obama admitted that his country's half century attempt to defeat Cuba had failed. 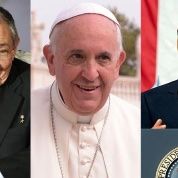 What also came as a shock to many observers was the role played by Pope Francis in helping secure this historic turn in U.S. policy toward Cuba.

According to statement released by the Vatican the same day the Cuban and U.S. presidents made their announcement, Pope Francis not only wrote letters to U.S. President Barack Obama and Cuban President Raul Castro, but hosted delegations from each country at the Vatican in order to facilitate the necessary dialogue

Both Cuban and U.S. officials were vehement that the release of the five Cubans incarcerated for gathering information on terrorist groups in Miami, along with jailed U.S. government contractor Alan Gross was not a prisoner swap, although their release was a key component of the historic announcement.

President Obama confirmed in his December speech that the release of Gross was integral to the decision to renew diplomatic relations with Cuba and that this very issue was touched upon by Pope Francis in his letter.

A U.S. official later told Time magazine that the Pope's letter to both parties addressed the imprisonment of Gross and the Cuban Five. That official also confessed that Pope Francis' letter “gave (U.S. officials) greater impetus and momentum for us to move forward.”

Since the December announcement, progress between Cuba and the United States has been slow and not without significant obstacles, some of which have yet to be overcome.

In May the U.S. State Department finally removed Cuba from its list of state-sponsors of terrorism. Cuban officials had made clear that this change would be a precondition for the normalization of relations.

Cuba was placed on the list March 1, 1982, amid a period of heightened tensions between the two countries in the midst of the Cold War. The U.S. government took great issue with the Cuban government's support for national liberation movements throughout the world, particularly its support for guerrilla struggles in Latin America and Africa. However, then Cuban leader Fidel Castro announced in 1992 that supporting insurgents abroad was no longer an active Cuban policy.

Sources cited by Reuters stated that the United States and Cuba are expected to reopen embassies in early July, though an exact date is not yet clear. Obama had previously expressed hope that the embassies would be open in time for the Summit of the Americas, held in April, a deadline that was missed.

U.S. officials have nonetheless insisted on intervening in the internal affairs of Cuba, and one of the issues keeping the two from opening embassies was the U.S. insistence on providing funding and training for opposition figures on the island. The U.S. House Committee on Appropriations approved in June US$30 million for “programs to promote democracy and strengthen civil society in Cuba,” though these funds are syphoned to opposition groups and projects, including the USAID-funded ZunZuneo social networking service that was exposed as having the goal of destabilizing Cuba’s government.

That type of open interference is has continued to provoke the ire of the Cuban people and the island’s officials. Cuban President Raul Castro has insisted that the United States must respect the island’s socialist political and economic system, while even leading opposition figures have recognized that Cubans “still want the Revolution.”

"In the same way that we have never demanded that the United States change its political system, we will demand respect for ours," said Raul Castro in December.

A critical pending issue is the lifting of the unilateral U.S. blockade against Cuba and the closing of the U.S. military base on Cuba’s Guantanamo Bay. Cuba has said such measures are essential for normalizing relations between the two countries.

The Vatican issued a statement in December that said that it would “continue to assure its support for initiatives which both nations will undertake to strengthen their bilateral relations and promote the well-being of their respective citizens.”

The realization of full diplomatic relations, which invariably includes the lifting of the illegal blockade on Cuba, may well require some additional prodding from the Vatican.

Pope Francis is due to visit Cuba in September, ahead of a visit to the United States. He would be the third pope to do so since the triumph of the Cuban Revolution. Pope John Paul II, despite being a fervent anti-communist, visited in 1998 and his successor, Pope Benedict XVI paid a visit in 2012.

Negotiations between U.S. and Cuban officials are ongoing.